Im halfish thru the powerless books, and lookin forward to the trials. Crazy bummed that theres a chunk of issues missing in between, like the Nubia stuff. And just read the Brave and the bold issue where Diana saves Batman from racecar shenanigans but gets busted for stealin a car!

Any comic from any company gets added to the total, as long as it is generally considered a comic. So, for example, X-Men: the Dark Phoenix Saga counts, but My Hero Academia doesn’t.

Ah, I didn’t know he got into writing comic books after his adventures in Jurassic Park.

I figured since manga is organized differently, it would be difficult to compare. I will say, though, I’m not all that well versed in manga, so if you think it should count, then by all means, go ahead and do so.

I’m up to 215. I’d list but at this point it just seems too comprehensive 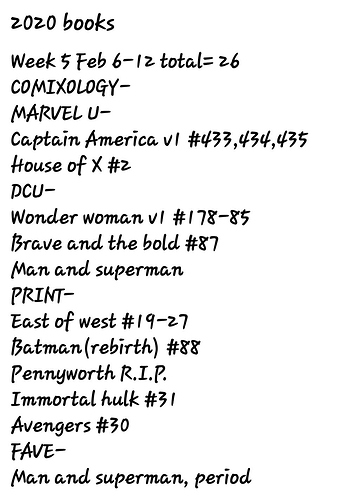 Just finished up east of west, sooooo good. Every time i long for the whiplash pace of older comics where so much would happen in just 22 pages, i read a book where there’s a definite long term plan, and I’m left in awe. 2019 ended with a read thru of the Manhattan projects, might do Hickman’s FF stuff next. And his xmen stuff is trickling into Marvel U…dude writes a mean funnybook.

I read The Court of Owls for World of Bats, so that’s seven issues.

OK, so I’ve started reading a year at a time of each series instead of a month at a time because I was going nuts rotating through all the titles constantly. Anyway, here’s all my 1993 picks (though I’ve also already read all the issues of Detective Comics, Robin, and Catwoman from that year).

Finally picked up the three lead-in issues to Knightfall from the Batman title. Probably should’ve read those a while ago, but they were the only ’93 issues I hadn’t read. Decent but unremarkable.

Twelve issues of The New Titans. I could write multiple books on all the things that have gone horribly, horribly wrong with this series when I already thought it was a little overrated to begin with (mostly the fact that all the characters I actually like seem to constantly end up dead, evil, or vegetative). I know, I know, I should stop reading it, but I’m kind of morbidly fascinated. I think I have a problem.

Eleven issues of Wonder Woman. That space arc seriously lasted way too long. Meandered for a couple issues before launching into an arc that’s a little better but not super interesting.

Eight issues of Justice League America. Jurgens’ run became very nearly tolerable once Superman died, and hey, at least J’onn came back. The following run was looking interesting but I hit a stretch of un-digitized issues.

I’ve been meaning to read what we’ve got of the Connor Hawke Green Arrow run, so I made a last-minute decision to catch the closing arc for Ollie. Only two issues so far (I’ll pick some more up in ’94) and by different writers (#80 by Mike Grell and #81 by Kevin Dooley), but they were both fine issues.

Sixteen issues of Batman: Legends of the Dark Knight: I’ll bullet-point this by story arc because of the rotating creative teams and varying style.

Twelve issues of The Spectre. And… OH MY GOD (so to speak) THIS BOOK IS AWESOME. Barring a few single issues, this is probably the best new thing I’ve read all year. Digging up gems like this is one of the reasons I’m doing such a slow crawl through Post-Crisis

Showcase ’93 is another twelve issues. Going to break it down by the different story arcs:

Twelve issues of Black Canary. For a twelve-issue limited series, it’s a complex beast. It starts with the same creative team as its four-issue predecessor from 1991, and is about as disjointed and incomprehensible as that one. Then Issue #8 has an entirely different creative team and is focused almost entirely on the Ray for some reason. Then the original creative team comes back in #9, except they stick with the new editor, Denny O’Neil instead of Mike Gold. And it’s a perfect example of the difference an editor can make, since under O’Neil the series gets downright legible, and, dare I say, even good. Still too many guest stars, but all those guest stars add up to Oracle, Black Canary, and Huntress’s first appearance in the same issue with #10, so I’ll cut it some slack. It also ends on a cliffhanger that’s never picked up anywhere, according to my research.

Seven issues of Justice League Task Force. Yeah, yeah, I know. Except for an obscure and edgy ‘90s Justice League spinoff, it’s… surprisingly decent, actually. I kinda like it. Rotating creative teams are always risky, but the issues I read were all by good writers, so the tone and continuity aren’t the most consistent but the quality honestly totally holds up.

So, I just got lucky reading an over-the-top, edgy ‘90s series. I’m a dumb person and wanted to push that luck, so it was on to six issues of Guy Gardner. And what do you know? Another series that’s actually a lot better than it has any right to be.

For Superbooks, I already read the whole Death of Superman saga, so I just picked up seven issues on the tail end of the year. And… THE SUPERMULLET! IT BURNS! (But otherwise these were mostly fine issues.)

Wow, that was a looong read @BatJamags.

I loved it. And it came at a good time for me. It was a hectic bad week for me and I barely got a dozen comics read. So, it was nice to see someone enjoy their week in comics.
Kinda disappointed hearing about the lather-rinse-repeat approach of the New Titans’ 90’s run. Just picked up their Silver/Bronze age runs via omnibus’ and the entire 80’s New Teen Titans run. Watched them in Young Justice animated series and wanted to go back and read the Whole history.
So, you like Spectre, too. I found Mr. Terrific’s (II) origin story in that series and fell in love with it (got a real kick when they upgraded the Arrowverse to the Spectreverse [hey he did rewrite their history]).
I was thinking about reading all of the Justice League runs (halfway through vol. 1). Nice to know Task Force is pretty decent.
Thanks again for comic op-ed it was very encouraging.

get to comic shop