Though if you’re asking in terms of secondary sources I use to organize, I make my lists with reference to DC Database. Their articles for each year (here’s the one on 1986, for example) were helpful in picking titles and figuring out when they ran, and I’ll occasionally reference the articles on individual issues (like this) when I get confused.

For events, I use this timeline.

Impulse: 12 issues from 1999
Writer: William Messner-Loebs (6 issues), Todd Dezago (5 issues), Shon C. Bury (1 issue)
Wrapping up Messner-Loebs’ run this year. Not that good, except for the Riddler issue, which was legitimately incredible. Todd Dezago’s run as far as I’ve read has a more interesting plot, but it’s not funny. But, like, in a different way from Messner-Loebs. Messner-Loebs tried to make jokes and they fell flat, while Dezago just doesn’t even seem to be making many jokes at all. This less cringe-inducing and more “That’s OK, I guess,” but I still miss Mark Waid’s run. 1,532 issues total.

The Batman Chronicles: 3 issues from 1999
Anthology
I actually haven’t read the No Man’s Land tie-ins from this series, which is all of the issues from '99.

Martian Manhunter 12 issues from 1999
Writer: John Ostrander (11 issues), John Arcudi (1 issue)
#3 revealed that one of Martian Manhunter’s human guises is a supervillain named “Big Doof” who gets his teammates captured by being a big doof. After that, anything could’ve happened in the rest of the year and I’d have been happy. (But the rest of the year was really good.) 1,547 issues total.

Doctor Mid-Nite: 3 issues from 1999
Writer: Matt Wagner
This is an excellent mini. I almost skipped it, but I saw somebody else asking for Doctor Mid-Nite recommendations, so I figured why not? And I mean, there are things I could complain about (villains are kind of a lame cliché, a couple odd plot contrivances, etc.) but it was still a really engaging read. 1,550 issues total.

Stars and S.T.R.I.P.E.: 6 issues from 1999
Writers: Geoff Johns, James Robinson (co-writer on 1 issue)
Say… They should make a TV show out of this! In all seriousness, this is pretty fun. Sort of reminds me of Impulse. Not quite as funny as the early run of that series, but definitely Impulse-ing better than Impulse was this year. 1,556 issues total.

OK, I spent way too much time reading today. But hey, my tokens opened up, so might as well earn 'em fast, right?

JSA: 5 issues from 1999
Writers: James Robinson, David Goyer
Given the way I’ve heard this series talked up, it’s surprisingly dull. Lots of “Run around! Fight scene! Run around! Fight scene!” I’m hoping it’ll get better as it goes. I guess it’s mostly Geoff Johns’ run that I’ve heard praised, and I’m not seeing his name on any covers until the first issue of the next year. 1,561 issues total.

Anyway, I’m on to Superbooks next, and those always take a while, so I’ll be disappearing for a bit even if I do binge straight through them.

I think she is a good support character for Batman.
BUT everytime I think of her l am reminded of Diana Muldaur a.k.a. the raspy voiced nurse with a poor bedside manner from Star Trek TNG. She played Dr. Thompkins in a Batman episode and from then on I’m distracted by how much I dislike Leslie Thompkins. 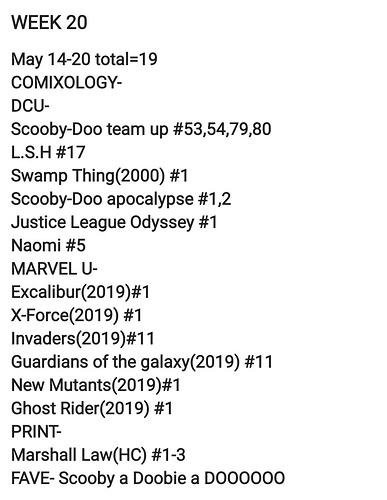 more new print comics next week and with weather looking up, more time reading in the hammock

Keep hearing lots of good things about Scooby Doo; he was one of my favorite Saturday morning cartoons. Going to have to give him a read.

The team ups ARE hokey, alot like the old cartoon, but theres this coolness to them. Nostalgia, baby, more than just a perfume…

I’m not feeling the “Superman trying to be everywhere at once” arc, because even the characters can’t adequately articulate what he’s actually doing wrong. I always figured that he was already responding to anything he was able to hear about in time to be helpful. At a couple moments, they try to make it more about trying to control people instead of just helping, like kind of a Justice Lords/Injustice thing, but that’s not really supported by what we actually see him doing, especially not early on. Another missing oneshot, “The Supermen of America.” And once things finally do escalate, adapting Superman IV: The Quest for Peace is… certainly something they did. And his suddenly appearing army of robots who are all as powerful as he is would be a cute Silver Age reference if they weren’t playing it dead seriously. And it all boils down to that Dominus idiot from the previous year to remove any of the stakes or thematic weight they did manage to build up. And this arc is SO LONG! Thank god I wasn’t reading this week-by-week when it came out. That would’ve been excruciating. I mean, this guy just doesn’t shut up. I’ve seen less wordy villains in Grant Morrison comics. I’m sorry if it seems like I’m harping, but this thing seriously won’t just frickin’ end. And… and…

Oh, you’ve got to be kidding me.

THE ACTUAL CONCLUSION OF THIS GODFORSAKEN ARC IS IN ANOTHER UNDIGITIZED ONESHOT!

That’s half the stupid year building up to nothing. What a waste.

Anyway, we get a few shorter, fairly inoffensive stories (eventually) and then suddenly get mobbed by guest writers of varying quality. Seriously, this year had eighty billion different writers. Anyway, it eventually cycles back to an arc that I was 95% certain was going to dredge up Cyborg Superman again and pleasantly surprised me by using Brainiac instead. The Day of Judgment tie-in from Man of Tomorrow was the best issue these books have had in a while, and it also is the last of that series.

The December issues seem to be just getting new creative teams settled in for the new millennium, but they’re all pretty good.

Something’s throwing me off on my numbering here. The triangle number on the last issue I read was 48, and there were two missing oneshots that I didn’t read which should be contributing to that total, which should leave my actual reading at 46 issues. But I counted the issues I read several different times and by several different methods, and it gets me up to 47. I know what I read, so I’m going to assume the 47 number is accurate (maybe they accidentally repeated a number on the triangle numbering; I didn’t notice it at the time but I think it’s happened before) and call my total 1,608.

You know what, the more I think about this Dominus arc, the less sense it makes.

So Dominus is apparently from another… Dimension? Planet? Universe? And he was part of a group of five people, one of whom was set to become Kismet. Why them? How were they chosen? How is one chosen from among the five? Who is Kismet? What is Kismet? Why is someone not already Kismet? The only one of those questions I can answer is that I think Kismet is supposed to be a Lord of Order, but that might be a later retcon.

Anyway, Dominus was the top pick for the job because of… reasons. But instead, his girlfriend got picked, because… she did. And Dominus was mad about that and decided he wanted the power so he could [ERROR: GOAL NOT FOUND]. And so in 1998, he traps Superman in a series of illusory lives (the throwback issues) as bait to lure Kismet in to help him so he could steal her power. A ridiculously overcomplicated plan, but not totally illogical, and it did work.

So now Dominus is an omnipotent reality warper bent on remaking the universe in his image because he wants it to be different. Different how? [ERROR: GOAL NOT FOUND]. But to do that, he can’t be the killer he once was. He must become someone else. He must become… something else. has to mind control Superman into taking over the world with an army of robots. Why, you ask, does he need Superman to take over the Earth with an army of robots when he’s already virtually omnipotent? Well, he doesn’t, actually. Towards the end, he seems to be perfectly content to take over the world with an army of robots on his own, no Supermiddleman required.

And I’m sure I don’t have to tell you why taking over the Earth with an army of robots helps him remake the universe. I mean, the writers didn’t, and they’re the professionals, right?

And this is all butting in on what was almost an interesting ethical dilemma. If Superman really were just trying to help, we could explore some themes about free will versus safety, how much power we’re comfortable with one person having, and that sort of thing. For example, the stuff with the dictator he tries to depose is similar to a much more interesting arc from Marv Wolfman’s Adventures of Superman run involving Qurac. But early in the arc when people start pulling those talking points, Superman hasn’t done anything wrong yet, and later on when he starts to cross the line, it turns out that it’s actually all Dominus’s fault, so the thematic conflict stops being about the ethics of power and starts being about punching Dominus in the face until he goes away.

You know what, the more I think about this Dominus arc, the less sense it makes.

Ah, the mark of a truly great story.

Also, I recently read all of Doomsday Clock in one day and it is so much better read like that. It actually feels like there was some sense of cohesion to the continuity (for instance, there’s pretty blatant references to Heroes in Crisis and Metal), which was cool to see. A lot of the plot details made more sense, too.

Sorry I haven’t been up to date for a while, managing by son and virtual learning is a pain.

2000! I’ve read all of Robin, Azrael: Agent of the Bat, Nightwing, JLA, Birds of Prey, Titans, and Batgirl from this year. No company-wide crossovers.

Detective Comics: 10 issues from 2000
Writers: Greg Rucka, Jordan B. Gorfinkel (“The Jacobian” backup feature in 6 issues)
OK, this isn’t bad. I hate how Rucka writes Batman, but Batman is mostly just going around punching faces and solving cases, and the rest of the plot is reasonably solid, I guess. The backup feature is honestly more interesting than the main plot, though. 1,618 issues.

The comics I have read for May 11 2020-May 24 2020.
Sorry I haven’t posted anything for awhile, I got distracted with lots of stuff like everyone else. Then I thought I sent my last post only to find out I didn’t, thank goodness

Okay, it’s been a while since I posted, so here’s what I’ve read in the meantime:

For a total of 458 read since my last update, so 811 read overall this year

I have read lots of Action Comics Amethyst Convergence and others. I am up to 442.