Batman: Gotham Knights: 5 issues from 2002
Writers: Devin Grayson (3 issues), Scott Beatty (2 issues)
Skipping the Murderer?/Fugitive tie-ins here, so not that many issues. In #24, Bruce literally having a conversation with Batman like a split personality was pretty over-the-top. #32 made up for it, though; that one was great.

Starting Scott Beatty’s run, this Bane arc is a little contrived in premise, but it’s not bad in execution so far.

The Walking dead took over the week, with much of my downtime spent outside. It really is good, but there’s no way I coulda read this on a month-to-month basis. Dc-wise, I got into LEGENDS, remembering the days when events were more soap opera than cinematic. Marvel…is marvelThe fave was Billionaire Island, tho. Mark Russell, when his writting is on point and has a bite, it’s spectacular. And he’s paired with Steve Pugh, just like the FLINTSTONES book thats on here, so its a two-headed awesome read. 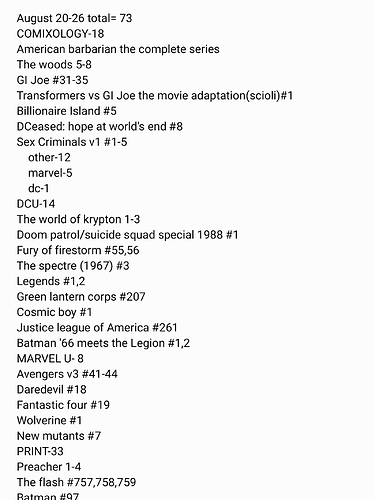 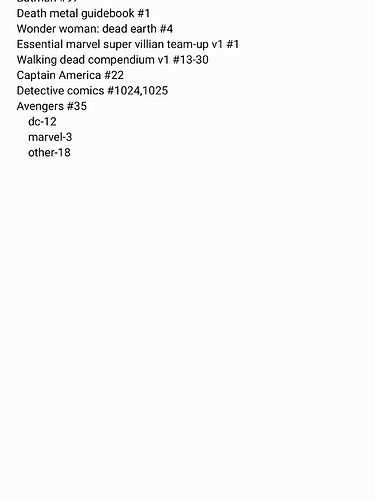 Not reading much that’s not DC, but definitely want to read The Boys

Been about two weeks and 61 issues read, for a total of 862 for the year. In addition to the usual club directed readings from World of Wonder, Doom Patrol and Superman Fan Club, plus the DC Book Club and a hit from JSA Club (all really well run, fun clubs) I’ve been deep into the Swamp. Wein’s original 13 issues are the best of 70’s DC horror as Swampy is a hard traveling Frankenstein’s Monster. This completely holds it’s own today. Jumped from there to Alan Moore’s run with Saga of the Swamp Thing 19. This is as spectacular as I remember it. Moore at his finest. Actually read some non-DC with Image’s Fraction/Dodsons’ Adventureman which is as much fun as something from these three creators ought to be.

Catwoman: 12 issues from 2002
Writers: Ed Brubaker (11 issues), Steven Grant (1 issue)
OK, this is really good, but, like, how many old, forgotten ex-best friends does Selina have? We’ve gotta be up to like five or six in this series alone, and it came up a time or two in the previous one.
2,846.

COMIXOLOGY has a big Boys sale to hype the show, with the first 18(?) issues free. And some other really good deals. I know money’s always a tricky beast, but for the price, COMIXOLOGY UNLIMITED is totally worth it…and no, I’m not an Amazon-bot thing, heh

ive fallen down the well on several series cuz they’re like, .49,.99 an issue. GIDEON’S FALLS is all as promised, awesome. SEX CRIMINALS, which you gotta get from the website cuz its a mature book about time freezing, glowing ding-dongs(ha ha) was .99 an issue. I have the Adventureman books, but haven’t read them for fear that it’ll fall off schedule and have a 3 month gap bettween issues. Good to hear its gonna be worth the wait

One thing I’ll call out specifically is that I’m inordinately proud of myself for reading the Bizarro issue with the pages in reverse order as published rather than starting at the end and working backwards. It was dumb and confusing and it was probably just meant to be read right-to-left since the panels on any given page were in proper chronological order, but I am proud nevertheless.

OK, the one series that’s mostly intact is Action Comics, which is a bit hit and miss but the hits are solid ones. Though, Guy Gardner as a demon is… um… a… choice. That this series made.

The “Ending Battle” crossover is really exhausting because it’s like non-stop action scenes. Running across four titles and eight months, that’s eight issues of mostly “Fly to a place, punch a face.” Also, the main villain spends an entire issue doing illusions, and the big cliffhanger is “OMG, he killed Lois!” Yeah, sure. Pull the other one. And it’s basically building up to Joe Kelly being all “Hey, remember when I wrote What’s So Funny About Truth, Justice, and the American Way? I remember when I wrote that. That was pretty cool, right?” And I mean it was pretty cool, I’m just not sure this story adds much to it.
2,868.

Did pretty decent this month. I’ve wanted to read The Batman Who Laughs once the last issue was available. I’m really excited for the McFarlane figures coming out soon.

Starting in on 2003 here. No events to speak of, so that simplifies things.

Action Comics: 12 issues from 2003
Writer: Joe Kelly
So, we’ve got a couple filler issues, the end of a four-part crossover where the first three are missing, a kinda mediocre milestone issue, the rushed conclusion of the new Zod’s arc (which was all right, but his motivations and backstory don’t really make much sense once they’re revealed), and an arc about Traci Thirteen, Natasha Irons, and a new Supergirl that winds up being a really wordy wall of clunky banter. Meh. Not the best year for this title, but nothing unreadably bad, I guess.
2,948. 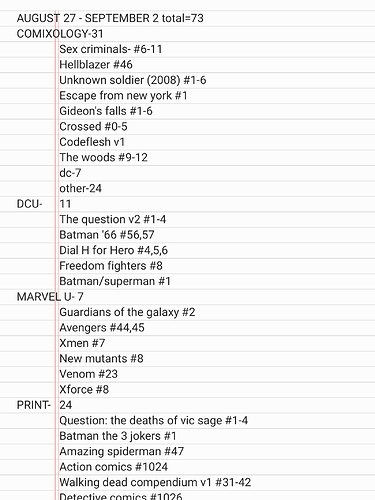 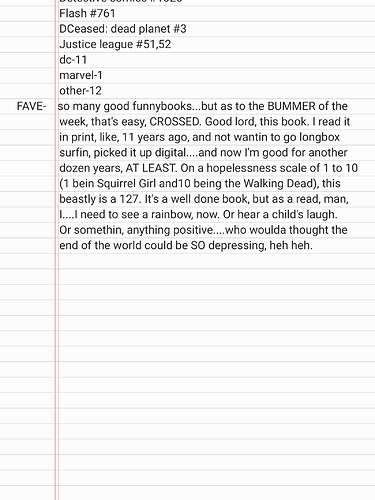 Only one issue of Batman that I haven’t read for 2003, and it’s the first part of a long story, so I’m actually going to just pick it up when I do the 2004 issues.

Wonder Woman: 11 issues from 2003
Writers: Phil Jimenez (2 issues), Walt Simonson (6 issues), Greg Rucka (3 issues)
Thoughts on the closing couple issues of Phil Jimenez’s run: First, I only just now noticed I’ve been misspelling his name (it’s got two ‘e’s, not two ‘i’s) and that’s really embarrassing. Second, just once I’d like to see a superfight in some other country where one or more local heroes show up and are actually competent and useful. Third, I’ll just reiterate that he actually made Angle Man cool, which I’m pretty sure means there’s hope for everyone.

The “Game of the Gods” arc by Simonson is pretty light on content for its length. Most of it is just trying to sell us on how intimidating the bad guy is. And while Trevor Barnes was a little bland, I kinda liked him and didn’t want him to get killed off.

For the first few issues of Rucka’s run, it’s a bit too early to have a particularly informed opinion.
2,992.

Got a little motivated on Who’s Who. Looking forward to finishing up and comparing notes with the DCU Encyclopedia. Some (ALL) of those '85 - '86 entries really need updating. But still fun to read.

Finished the last official Elseworlds tale, Green Lantern was a fun turn-of-the-(20th)-century yarn; will be scanning the Library for more Elseworlds tales.

Reading through Flash and got hooked on Reverse-Flash; mostly because of Tom Cavanagh’s awesome portrayal. His first two appearances he didn’t have real speed or the Red Glowing Eyes (or a real name). But he did have sparkly eyes that he used to focus his mind control (?) on you. Waiting to get to the part where he kills Iris and Flash kills him. But loving to see Flash progress through the Silver Age (he’s literally the start and finish of it.)

Been reading through all of the Teen Titans appearances. Showcase 100 and DC Special Series 11 had honorable mention and last appearance of the old team. They were great stories on their own. Showcase was a monumental Silver Age pre-Crisis crisis featuring nearly everyone that got their start or reboot in the mag. DCSS was a great Flash(Jay), Flash(Barry), and Kid Flash(Wally) romp. Finally, made it to the New Teen Titans. I was just as excited reading NTT again now as I was when I first pulled them off the 7-Eleven spinner rack in 1980. All I can say now is “Titans are back bitches!”

Only got two issues in for my 1940 installment of reading through the years on the DC Library. But they were both great Bat-tales. Issue 35 had the first proto-Batmobile upgrade from high-powered red sedan to the high-powered dark blue roadster (Now he won’t have to park so far away from the crime scene in his new tactical dark color.) Issue 36 saw the first appearance of Professor Hugo Strange. (Batman also casually fires a firearm to attract police attention to the crime scene; weird.) And the Library had the entire anthology of both issues. Hope they continue this with the rest of Detective (and start doing it on Action; I miss Zatara).

Scooby Doo is a fun run. Issue #50 was a great anniversary issue; dedicated to the late William Hanna (1910-2001). Great nostalgic issue with dozens of past villains and fellow Hanna-Barbera alumni including Blue Falcon, Funky Phantom, Speed Buggy and many more. At the end of the story Fred, Daphne, and Velma speculate that it would have taken at least 30 years to accumulate so many villains which would make them “almost fifty years old. Spooky!” Spooky indeed.

From,say, 320(?), where Flash kills Eobard till the end, 350, is a good readthru. Cary Bates was doin stuff then that would be considered “normal” now, the long plan story. In some old comic mag, maybe Amazing Heroes, this didnt go over well at the time, and Infantino’s art wasnt cuttin it in the early 80s.

The Flash: 12 issues from 2003
Writer: Geoff Johns
Zoom would be a lot easier to take seriously if he didn’t keep making this ridiculous expression: 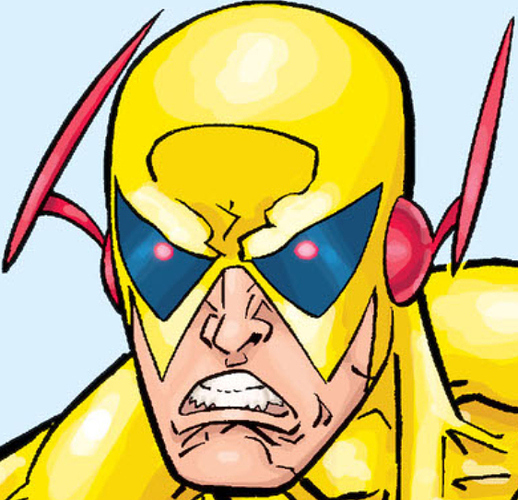 Anyway, the amnesia arc is stupid and happens because Spectre Hal decided to be an obnoxious literal-minded genie.
3,016.

Amazing how things change @boodikhan . And that expression is apropos for Zoom @BatJamags lol . That’s the way I always pictured him anyway. He always had true hate for Flash.