Amazing how things change @boodikhan . And that expression is apropos for Zoom @BatJamags lol . That’s the way I always pictured him anyway. He always had true hate for Flash.

Batman: Legends of the Dark Knight: 12 issues from 2003
Anthology

Green Lantern: 15 issues from 2003
Writers: Judd Winick (8 issues), Jay Faerber (1 issue), Benjamin Raab (6 issues)
OK, what I am enjoying here is getting to see some of Sector 2814 outside of Earth. I mean, they managed to go 10,000 years without a human Green Lantern, so there’s got to be a lot of other stuff going on, but everything is always either cosmic threats to the whole corps or Earthbound supervillains.

So there are bits I like, but I still just don’t feel all that invested in it. Like… the plot is what I would want from a GL story, but the character stuff is pretty weak.
3,064.

JLA: 15 issues from 2003
Writer: Joe Kelly (14 issues), Rick Veitch (1 issue)
Well, this year finally puts the boring, longwinded, time travel-focused “Obsidian Age” arc out of its misery, so that’s a plus, but it takes an extra-length issue plus an epilogue issue to do it.

Also, what is it with Joe Kelly and having people live through implausibly long but narratively inconsequential time skips? In Action Comics, Superman and Wonder Woman hung out with Thor for a thousand years and barely acknowledged it. Now here you’ve got everybody in Atlantis getting bumped fifteen years older and Plastic Man spending three thousand years at the bottom of the ocean, all of which is ultimately going to go nowhere.

God, this run just gets more and more annoying, too. How is this so much worse than Kelly’s Action Comics run?

And, like, hamfisted, thinly-veiled Iraq War parallels? Sure, that’s one thing. But do you have to use like forty-seven different, unrelated metaphors for the same hot button? Just pick something, make your point, and move on.

Speaking of hot buttons, the “Trial by Fire” arc is sort of an improvement, though the eight hundredth retcon about THE REAL REASON Martians don’t like fire wasn’t strictly necessary. In general, a bunch of these plot points seem to be overwriting the Ostrander Martian Manhunter series, which annoys me because that series is kind of better.
3,096.

Joe Kelly is a writing enigma.
His Deadpool was straight out BWAHAHAHAHA funny.
His JLA is downright boring but the Mahnke art makes it worth rereading.
His Superman is straight down the middle. He writes one great story then drags you down to tears with a boring story.

40 books in last 10 days for a grand total of 903 for the year. Best thing, hands down is Moore’s Swamp Thing. Have not reread this since it came out and it is worth every ounce of praise people heap on it. My only surprise is that my wife liked this story when she really did not like horror movies. It’s the depth of the writing whether it’s the love story of Swamp Thing fighting evil that I think held it together for her.
Action Comics (1938) 315-316 Superman Fan Club
Aquaman 62
Batgirl 48
Batman 97
Kingdom Come 1-2 World of Wonder
Superman’s Girl Friend: Lois Lane 1-2 Superman Fan Club
Swamp Thing (1985) 32-49 DC History Club
Wonder Woman: Come Back to Me (2019) 2 World of Wonder
Wynd 1-3 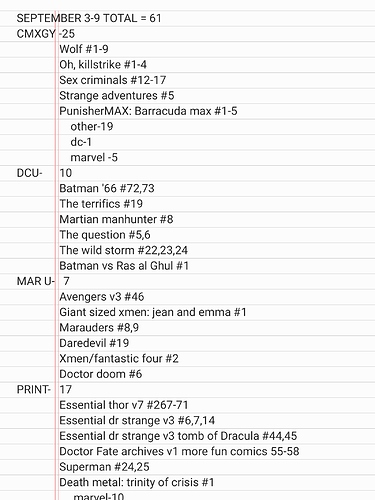 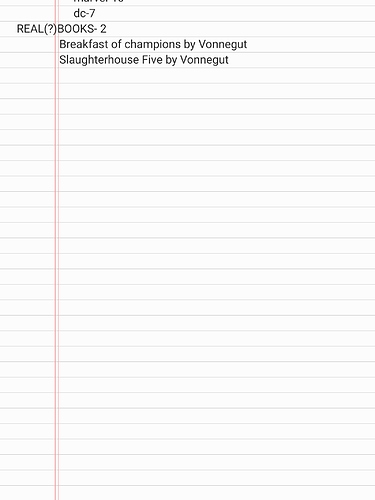 Gotta tweak these, the split pages drives me buggy. Anywhat, the BOODI AWARD of the week goes to Vonnegut, sorry my four-colored chums

why the big switcheroo to the Flash?

I did it as a joke and just haven’t gotten around to changing it back, mostly.

Young Justice: 5 issues from 2003
Writer: Peter David
Gonna miss this series, but it was a pretty strong conclusion. A lot of series end on a much more rushed note, and the ones that don’t drag out their concluding storyline way too long. This just quietly wrapped up what it needed to wrap up.
3,113.

JSA: 12 issues from 2003
Writers: David Goyer (Co-writer on 10 issues), Geoff Johns (2 issues, co-writer on 10 issues)
I feel like Goyer’s last couple arcs were all repeats of earlier ones, with threats the JSA already beat coming back EVEN BIGGER but then getting beaten again in pretty much the same way. Even in just two issues, the post-Goyer Johns stuff felt like the pacing just took a big deep breath. And not in a “breather issues where nothing’s happening” way. It almost feels like there’s more going on because the action isn’t the only thing that’s happening.
3,125.

Titans: 4 issues from 2003
Writer: Tom Peyer
GOD WOULD EVERYBODY JUST STOP DUMPING ON POOR JESSE ALREADY. Jay Faerber did his random character assassination of her in ’02 and rather than do anything interesting with it, both Peyer here and Johns in JSA (in an incident which happened later but I read earlier) are all “Hell yeah, Jesse Quick sucks, let’s pile on.” And it’s worse here because Devin Grayson’s run in the first half of this series is why I like Jesse to begin with.

There’s this whole scene where Starfire (who’s always been impulsive at best and often does irrational things BECAUSE EMOTIONS), is blowing a bunch of stuff up and swears she has a good reason. Jesse rightfully calls her on how crazy she looks, and Donna is all “I don’t believe that’s your real reason.” And then Jesse’s like “If this were me, would you believe me?” Donna’s response is that they wouldn’t, because Jesse “doesn’t trust [herself] anymore,” whatever that means.

So your argument, Donna, is that because Jesse has self-confidence issues, you would make sure not to believe her if she tried to convince you of something important. That’s awful.

Otherwise, a really underwhelming end to a series that used to be great.
3,129.

It has been a long time since I’ve updated so I’ve been able to read a lot. So, what did I read? 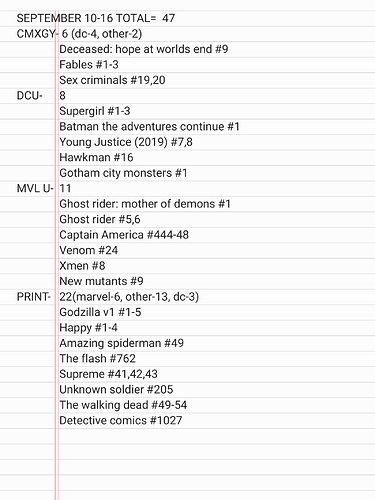