So, at the time this came out, Black Lightning hadn’t really been on any important teams other than the Outsiders, and I figured I had a better chance connecting through Batman than Metamorpho. So from Red Bee’s end, I was able to match Dick by going through the Freedom Fighters (Red Bee > Human Bomb (Freedom Fighters) > The Ray II (Freedom Fighters) > Martian Manhunter (Justice League Task Force) > Batman (any number of JLs) > Black Lightning (Outsiders)) and I briefly thought I was doing better until I realized that Ray Terrill and the Red Bee had never been on the same team at the same time. All-Star Squadron is kinda cheating, of course, but it’s the only path I can see that makes sense.

In all seriousness, in these early ‘00s Batbooks, Checkmate futzing around in Gotham for no readily apparent reason gets old really fast. Like, Batman through the perspective of a more savvy opponent than usual was sort of cool the first time or two, but at this point they seem to mostly just be trying to annoy him.

More generally, Devin Grayson’s run did a comparatively good job of keeping the Batman-being-insufferable-for-no-reason stuff to a minimum, so seeing that bleed in a lot more here is a little disappointing.

Plus, this kind of leans a little too hard on the weird idea that it was somehow Jason’s fault he died.

As for the Batman: Black & White backup feature:

BIG propers should go to those who came in with a plan and stuck to the plan. There’s no way in all the hells I couldnt done it that way, I probably wouldn’t have made it outta LOTDK alive, ha ha

I love reading through an entire series. But I guess I’m not the only one who gets side-tracked on what they want to read from day to day. I’m not good with schedules anymore either. But this reading challenge has helped me to focus more on reading comics; even if I can’t seemed to stay focused on which comics I want to read.

Catwoman: 12 issues from 2003
Writer: Ed Brubaker
OK, so Black Mask is mostly dangerous because apparently none of the main characters has ever seen a horror movie (when you’re worried about a conspiracy against you, don’t wander off alone down dark alleys while your friends are preoccupied), but luckily for our hero, he holds prisoners with chains crappy enough that you can break them by just pulling really hard.

This series is all right, it’s just that the arc from the first half of the year is a bit of a dud. The idea is this… well, now that I just read Daredevil: Born Again, I’m seeing knockoffs of it everywhere (Devin Grayson was making an even more inept attempt at the basic arc in the Nightwing title pretty much simultaneously with this), but that’s pretty much what it is. But the Kingpin’s assault on Matt Murdock was tearing apart a status quo that was the product of the preceding twenty years. Most of what Black Mask wrecks here was established or reintroduced in the preceding two or three issues. Maggie is brought back out of obscurity (actually coming back from the dead because based on what I read online, there was an obscure story that killed her off which Brubaker hadn’t heard of) and her husband introduced just for her to get maimed and institutionalized and him to get killed. The civic center Selina paid for was built in one issue and blown up in the next. Sylvia’s betrayal is hollow because she’d barely been introduced (something that people seem a lot more eager to give Hush – another concurrent arc – crap for than this). And it’s not like this builds to anything. Catwoman figures out that Black Mask is the bad guy, she confronts him, and five minutes later he falls off a building and that’s that.
3,194.

Ive been tryin to stay semi-current with the xbooks on marvel u, but man, there’s so many friggen xbooks. Deja 1995! 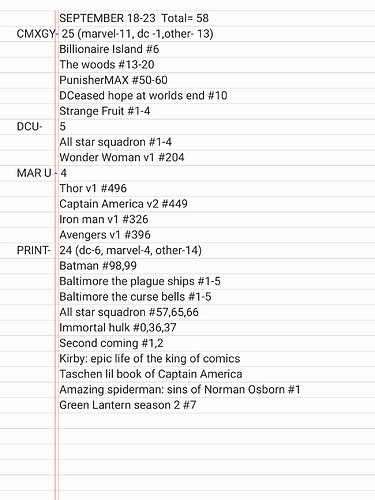 so happy the Nubia WW issues are finally here, and the big storyline that follows. The plan for the week(ha ha) is lotsa Wonder Woman and some GN bday gifts, the SLAUGHTERHOUSE 5 ogn, finishing the KIRBY biography ogn by Scioli, Second Coming tpb.

And now, some random stuff with Nightshade in it that I read because I was researching a thing.

Captain Atom: 1 issue from 1967
Writer: David Kaler
So, first up, we have the inspired villain concept of the Fiery-Icer, a guy who does fire. And ice. And the backup stories I was looking for aren’t actually in the digitized versions, so it’s off to:
3,195.

Suicide Squad: 3 issues from 1988
Writer: John Ostrander
I’ve read this before, but it’s still solid. Nightshade Odyssey is not the most interesting arc of this series but it’s a great series in general.
3,199.

And then the Shadowpact arc I thought I was gonna read isn’t digitized, so that’s that, I guess.

Still have a week left, but here’s the month so far.

Who’s Who - Almost finished with this interesting (if outdated) series. Looking for the update series’ on DC Library and Comixology, no luck so far.

Finished the Flash Silver Age Omnibus vol. 2 with 163. Still tracking the progress of Professor Zoom; in 153 he got his real name, Eobard Thawne. He’s upgraded to Ultra-Speed created by his genius intellect and 25th century super-science. No more ‘vibration-eminating’ stolen Flash suits or Z-element necklaces. (Still no glowing eyes yet, but they did ‘sparkle’ when he used his mind-controlling mental powers.) This volume highlighted the woes of being engaged to a newshen with an absent-minded professor of a father while being a super-hero.

Scooby Doo - Highly binge worthy for the art and nostalgia. (Especially when you alternate reading the comic with watching the Scooby Doo series with your dogs while playing the Scooby Snack game; it’s just like the Drinking Game but with Scooby Snacks.) Issue 60 starts off the 8-part Dragon’s Eye arc; Fred is deeply concerned this may be the first mystery Mystery, Inc. can’t solve. Issue 74 is a flashback to the original Scooby Doo TV series (that’s how we started the drinking game, er Scooby Snack game). Issue 77 Fred has a major fashionable wardrobe change while Velma gives the Mystery Machine a major upgrade in “Everything Old is New Again.” Issue 80 has a scary Edgar Allen Poe tale. And issue 83 features Elvira Mistress of the Dark on Movie Macabre or rather Evil Ella on Mystery Macabre.

) I started the next series at issue 40 (more Library omissions

). This ish was reminiscent of Scooby’s fellow Hanna-Barbera alumni The Groovie Ghoulies. The issue also had a segment called Velma’s Monsters of the World. Hope it continues in subsequent issues.

For Batman Day I read the newly released Batman: The Adventure Continues 1 - hope that nostalgic throwback to BTAS continues soon on the service. Meanwhile I got the bug for more nostalgic BTAS content and continued with The Batman Adventures. It loosely continues where BTAS left off. Really great issues and art in the style of the original animated series. Robin and Batgirl take over a couple of issues to tell some good yarns and even team-up for an issue sparking the old Dick/Babs ship. Batman shows his compassionate side with Killer Croc, Clayface, and Two-face in some very good yarns. Good issues and art throughout the series. It’s nice to see Puckett and Parobeck continuing throughout (so far) this series; maintains the consistency with the storytelling and art.

So I decided to update sooner than last time, but school is getting me down. I’ve been reading some older, denser books so it has slowed me a bit.

So what have I read?

Batgirl: Year One: 9 issues from 2003
Writers: Scott Beatty and Chuck Dixon
Babs may be better as Oracle, but this made me happy with like a ton of self-indulgent Birds of Prey references. I love it.
3,208.

17 days since my last report. 68 comics in that time for 971, closing in on the 1,000 club. Binging Swamp Thing across multiple titles. I’ve finished the Wein/Moore runs but Rick Veitch keeps in going strong. Really enjoying his take so far. I also read Brian K. Vaughn’s Vertigo Swamp Thing that focuses on Tefe’ Holland. I started off with high hopes and generally enjoyed it, and enjoyed it less and less as it went on. There’s not a single character in this series that ultimately you can empathize with. Everyone, and I mean every significant and many non-significant character, is at some level an SOB. All dad’s suck, everyone kills somebody, the world sucks. Uh. And I like Vaughn’s work, but not this one. This is a case where I get to trot out the old comic fan standby “this writer does not understand this character.” In current books, I like the Joker War and having fun in Metal Night Death whatever this is called.

I use the dawn of X trades to keep me pretty current. There’s 6 comics in each one even if a double like Wolverine #1

I like it. You’re on the home stretch @msgtv.