An in-universe flag for Gotham I made 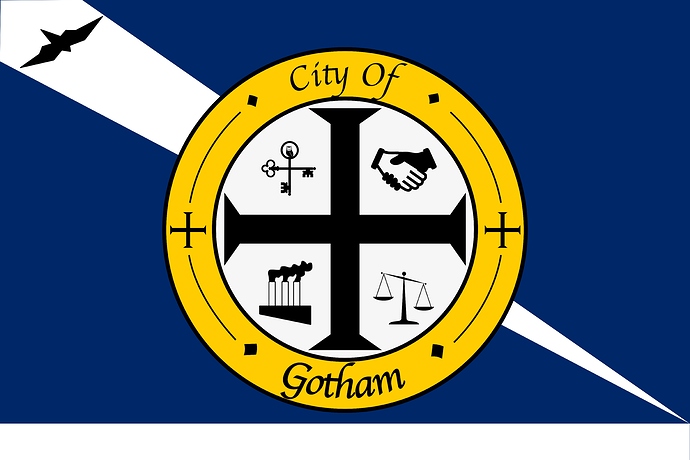 This is a flag I designed that I think could be used as a flag for Gotham City “in-universe.” For those who don’t know, most cities have a flag that usually follows a basic pattern of a dark blue background with the city’s official seal in the center and some minor decoration around it, so I have done just that but with hopefully a distinct “Gotham” feel. I specifically took inspiration from the Atlanta and Milwaukee flags and designed a seal that I think represents Gotham very well both in and out of universe. I tried to make it so that upon first glance, it looks like a pretty average piece of municipal art. However, if you look closer the symbols surrounding the knightly cross have a darker side to them, the scales of justice are uneven, one of the shaking hands are shadowy and black suggesting backroom and illegal deals, the keys have an owl in them, and the factory is spewing black pollutants. However, I also added a fun element for us fans with the bird silhouette in the corner resembling the bat signal, reminding us that there’s an answer to the darkness of Gotham. Anyway, that’s all from me, I had a blast making this and I hope you like it.

Nice, this is really cool!

This is REALLY good. Great work!

That’s awesome. I once made a house crest just like that. It looks awesome!

Wow! You really did a great job with this. Which city are you doing next?

I love the thought you put into the design! And I’m with @Barrys.Better.Half - which will you do next?

Very cool and well thought out.