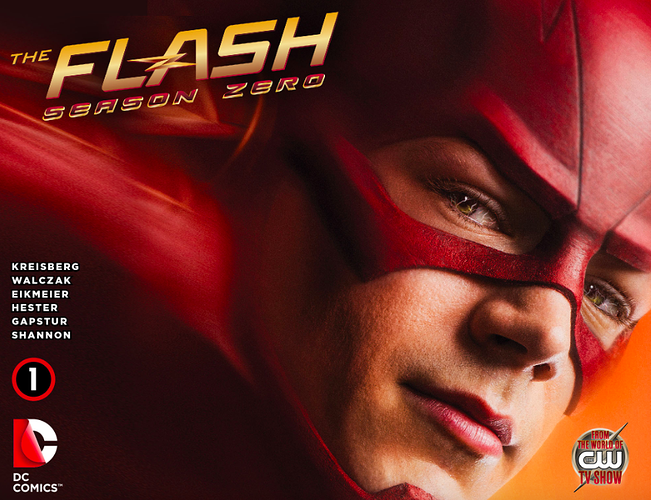 We’re switching gears for this month’s book club from the world of Arrow to that of The Flash! Specifically, we’re revisiting the show’s freshman season with the opening issues of Season Zero, a tie-in comic meant to take place concurrently with season 1 and further expand on Barry Allen’s adventures during his first year as the Scarlet Speedster. Showcasing a gang of metas straight out of the circus and a crossover with Felicity Smoak, there’s plenty to get into here, so let’s dive right in!

How did you feel Mr. Bliss and the Central City Circus fit in with the other season 1 villains?

It was great to see a colorful ensemble of villains, and the fact that they start out as a group definitely makes them stand out from the pack more. Even though I feel like it’d take less time to read this opening arc than to watch an episode of the show, there seemed to be a little more development packed in than usual. Not only were the villains fleshed out w/ Bliss’ brief but effective origin and a couple circus members deciding to go against him, but we also got some solid emotional work on Flash’s end w/ his hallucination of his mother. While some of the effects might’ve been a little much for the show’s budget at the time (or even now), it still would’ve been great to see this group get brought to life. It might be a little late to introduce new particle accelerator metas this late into the game, but I still think this group could work as a “villain of the week” in an upcoming episode

On another note, while I initially thought that the circus metas were all original characters, after doing a bit of research, it seems that Bliss does have some interesting comic roots. He appeared in a couple issues of 1995’s Starman also as a circus/freak show owner, but was in incubus in reality. This Bliss fed off of emotions instead of controlling them, but it’s not really that big a difference

Who do you think could be Felicity’s mystery “nemesis”?

My first instinct was to speculate that this could actually be the first time Felicity encounters Brie Larvan and just didn’t know it at the time, but between the “nemesis” having what looks to be red hair and Felicity’s contradicting claim of never having had a nemesis before here, that seems to rule her out. Given that she knows Felicity’s middle name, I’d wager she’s supposed to be someone who knows Felicity well – maybe someone from her MIT days who saw her hacktivism as a crime? (which I guess it technically was)

Do you think the fact that these issues can’t be canon within the Arrowverse takes away from their quality, or are they still enjoyable as a sort of alternate timeline from the show?

I was definitely disappointed when I realized this fact, as I had been reading these issues like they took place in between episodes of the show – basically showing what Team Flash was up to outside of Tuesdays. While I do wish that a little more care had been taken to make sure everything fit w/in the continuity of the show, I also can’t say this fact came all that close to ruining the comic for me. I can still enjoy it as a sort of Earth-1.5 story – something where things are mostly the same as the show, but different enough that it can’t quite fit in the same timeline. Since there seems to only be partial coordination between the show’s writers and projects like this, I guess I can’t be too surprised that there are some notable discrepancies between the two

Which artist did you prefer: Phil Hester or Marcus To?

On a purely aesthetic level, Hester’s work definitely stands out more. The unique linework makes everything more stylized, and while that might not be perfect for replicating a TV show, it does the art more memorable and easier to recognize. While To’s artwork isn’t quite as distinctive, I did really appreciate the way it was more authentic to the live-action look. That said, given how these issues are considered to be out of continuity anyway, I’d say I preferred Hester overall.

Do you think this change makes sense now that Arrow is finished, or should this continuity keep the same name?

I’ve already talked about this a little in another post, but you can definitely count me in w/ all the others against this move. Part of me does understand the thinking behind it, but not nearly enough to approve of it. The fact is, the Arrowverse name has just been a fixture for too long for me to think of this universe as being called anything else. It’s kind of a similar situation to the DCEU – while that’s never been the universe’s official name, it’s resonated w/ enough fans to stick despite efforts to officially name the continuity “Worlds of DC.” Besides, even though Oliver Queen is dead, this whole world started from Arrow, so it still makes sense honor that legacy by keeping the name intact. While I’m obviously very much against the change, I’m also confident that it won’t stick w/ fans at all and the CW will be back to calling it the Arrowverse soon enough

Regarding the CWverse I am 1000% against it. Just look at the name of this club? When I first joined I clearly knew what it was about.

The whole universe being what it is today is because of the Arrow TV show that started it. I honestly don’t know if “Arrowverse” has ever been its official name but, to just throw it away because the show has ended?? Disrespectful in my opinion. The better decision would have been to do nothing and just keep it the way it is. It is not like they needed a name to brand it. If a person is speaking about the Arrowverse it’s pretty clear what you are talking about.

CW could have saved some marketing money by leaving well enough alone.

Does this now mean no green arrow and the canaries??

Screenrant seems to agree with me lol.

Does this now mean no green arrow and the canaries??

I feel like this move doesn’t necessarily have any bearing on whether or not GAATC gets picked up. I’m wary of the show’s future more so based on the fact that it really should’ve been picked up a while ago, though maybe it would’ve by now if not for COVID. Fingers crossed that they’re just waiting to announce it next weekend at Fandome part 2

I’d even wait for it to premiere…just announce it and give me hope! I need more Dinah in my life.

Personally the circus did not really do it for me as an adversary for the Flash. It was too easy for them to connect the dots to determine who was doing it and why. I also felt there were much better villains who messed with Barry’s head and it seemed too convenient for “Harry” to have just the right device to help him recover. The first eight issues seemed like something that would be the B plot of a regular episode.
The art for the Smoak arc seemed much cleaner and the likenesses looked more like the characters. However I felt she would have more to go than worry about Barry and watch him on tv. Minor nitpick.
I am not sure who her nemesis is. It was female and to fit in with the Flash maybe it was Amunet Black? She was gathering her empire and it’s possible Felicity stumbled onto one of her crimes through hacking and cost her something.
I am ok with it being parallel to the main show because I have to figure the shows writers did not share everything with the comic writers and it adds just another level to the stories. Same characters and mostly follow but not held to it do budgets are larger in comics.
I think they should have left it as the Arrowverse in honor of the one that started it all. It would also show respect from the other heroes for Oliver even though they would not refer to it that way. CWverse just sounds forced and I don’t know why it has to change.

You’re not wrong, but if they spent more time working to figure out that it was the circus crew behind the crimes, there would’ve been less time to see Barry fighting it out w/ them. Considering that this arc is essentially like an episode of the show, and that the chapters are short, I think it would’ve been a bad move to draw out the mystery longer than it had to be so that they could get to the meat of everything

I can see your point. It still felt to me that eight issues could have been condensed down to at most two. It wasn’t my favorite but that’s ok.

I’ll also admit to a certain level of bias in enjoying these issues. Flash S1 is my favorite season of any Arrowverse show, so just getting a chance to revisit that time in any capacity already put me in a good mood when I started reading

I had a great time reading these. The circus gang was sort of repetitive. We’ve seen characters like this before from DC but the fast pace writing really gives very little time to think of these sort of redundancy issues. I found myself laughing and having a really good time reading these in the middle of the night. Sometimes I feel like these shows can stall or some dialogues drag on. I didn’t really feel that way reading these which is a plus and made me want to jump right into the next issue.

Its hard to tell with Felicity who her new nemesis is. Immediately when I saw the setup I though Oracle but clearly thats not the case. Its too early for me to speculate who it could be. It’ll be neat to check the remaining issues to see how this story develops.

The inconsistencies with the current televised story didnt really affect the way I viewed these comics. I actually felt like the comic gave the current Barry a new identity and (in my mind) a new voice. Sort of rebooting what already is a great story arc. We’re seeing new versions of our favorites characters every time there’s a chance and this felt like nothing new.

So keep the changes coming when it comes to the sideline story’s. Its breathes new life into the characters and makes for a fun read.

I found myself laughing and having a really good time reading these in the middle of the night.

Definitely agree w/ this. Barry’s one-liners here were great and reminded me how effective his comedic side can be when he’s allowed to indulge in it

Immediately when I saw the setup I though Oracle but clearly thats not the case.

It did look like she had red hair. You don’t think…?

Definitely not oracle but im definitely interested in reading more from the series.

Probably not, though somebody in the Arrowverse apparently has that name, and I’m still curious as to who it is

im definitely interested in reading more from the series.

The arc after these issues has King Shark and the Suicide Squad, so that’s definitely gotta be an entertaining read!

I just chuckled reading that. Ill probably check out the continuation issues later this evening.