Hello! I want to have a tournament bracket type showdown with members of Bat-Family! Think battle for the cowl. 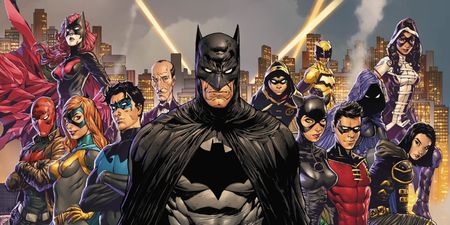 here are a few in mind, with Batman of course. I would love to get some feedback on who should be there for sure. Do you think the Outsiders should be included in this? I was thinking Women vs women and boy vs boy then the finals between the two or all random? If this is a good idea and you want to let me know like the post and if I get 15-25 likes I will make the bracket. I will ask @HubCityQuestion for more advice as well. I will give every who wants to suggest ideas a till thursday then I will start making bracket with the help of @Angel.Azrael Then make a new post next Sat morning in (General Discussion, under Polls tab)
Poll will be open till Thursday at midnight then a new bracket every Saturday morning

50 likes is hopeful thinking. I could make brackets as well in Adobe but first we need to think of how many competitors there will be and who would compete.

I think it should be a 16 slot tournament with

I know I just wanted to have 20-25 and I would follow through. Its just a lot of time I would not want people to waste if no one voted is all. I will revise post to 20-25. I would love your help making a bracket. I also got @HubCityQuestion to advise on bracket I will send you his thoughts and see what you think. We could use the first Azrael actual name

From @HubCityQuestion
I’d say randomize it. No need to divide along gender lines. I personally would not count the Outsiders as part of the Batfamily. Heroes like Black Lightning, Katana, and Metamorpho are more like coworkers or employees. I’d say keep it to Bats, Robins, and other heroes who have directly worked with Batman mainly in Gotham. I’d also recommend not using most members of Batman Incorporated, whose interactions with Batman himself are mainly minimal.

Under those criteria, let’s try to make a list that will fit a bracket style tournament. That means we need an exponent of 2 characters: 8, or 16, or 32, or 64. For simplicity’s sake, let’s keep it to 16, or we’re gonna start grasping at straws fast.

I suggest when listing them to use civilian names, as many of these characters have used alternate identities. I also suggest using an online randomizer to shake up this lineup, but here’s what I got:

That’s a very good list. I could make the brackets and what not but will leave them empty to be filled in for when you do the random generator. I also suggest you make a new topic for the tournament when ready and leave this topic as the planning for it.

Hi @Angel.Azrael
You Can make that bracket if your still up to making it. Do you need my email? After the first round of voting is over how do I edit the bracket then put up new poll? 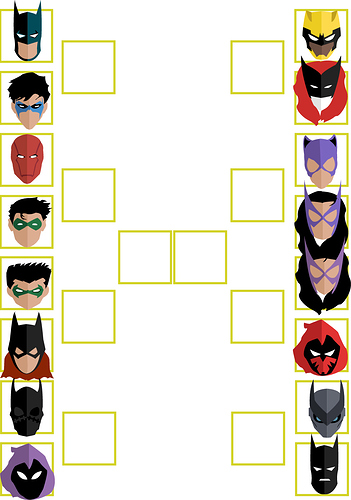 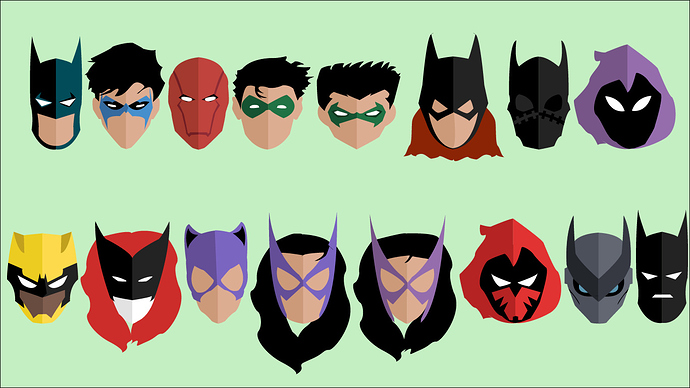 I made Icons for each of the characters. The brackets I think still need refining but this is what I have as of now.

@Adriel If you want to do the random thing you could give me the results so when I finish the brackets I could place the fighters accordingly.

Just finished. I put all the names in a random name picker and this is what we got… 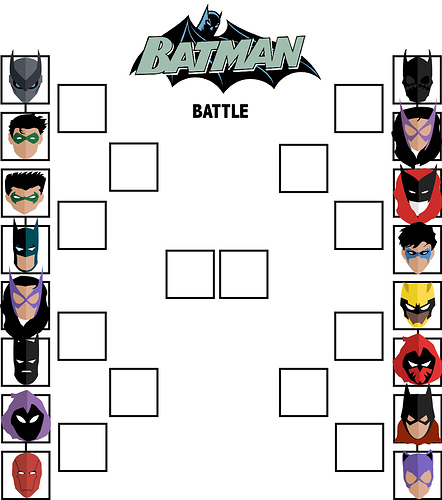 So I would copy this then past on post Then place a poll for voting.I well post on this coming saturday then have the polls open till Thursday night at midnight to let every one vote who wants to then post on sat for next round and so on. DO i tell you result of each round so you can make a new bracket?

If I were you I would make a poll for every one of the first rounds at once. Then after you close the first round pools I’ll update all the brackets for round 2 with Xs on the loosers and moving the victor icons with a line indication. If you want me to do it one at a time I can but it seems that all the pools will close at the same time.