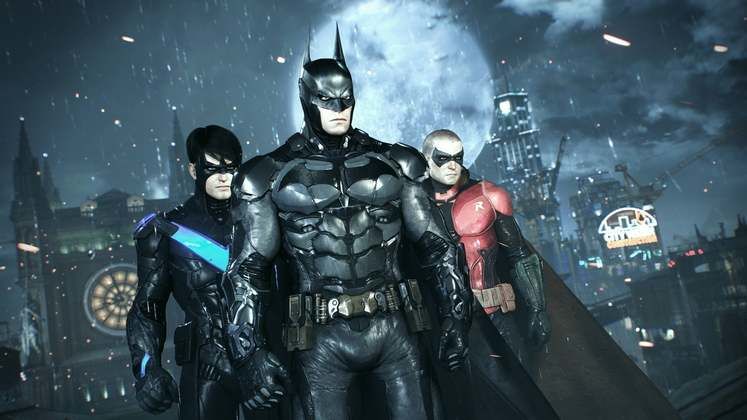 batfamilys747×420 45.3 KB
The next installment in the popular Batman Arkham franchise could be on the way.

The next entry in the critically successful video game franchise is rumored to be titled Arkham Legacy and will make the whole Bat-family playable.

The title was revealed on Twitter by games industry insider WabiSabi. Sabi alluded to the game being referred to as Arkham Legacy while also implying that Batman’s cast of allies will each be playable, writing that it “seems to be legit.”

Sabi has proven to have a credible track record following several of his E3 2019 leaks being confirmed to be true. She was also previously threatened with legal action by Nintendo during the trade show after revealing details about their press conference.

Discussion of a new installment in the Batman Arkham franchise recently gained some steam last month following Warner Bros. Games Montreal posted a short video on their Twitter page that featured symbols from the Court of Owls. The video seemingly confirmed rumors from last year that the Court of Owls would serve as the main antagonists for the game. In the comics, the Court of Owls is a secretive criminal organization that first appeared in Scott Snyder and Greg Capullo’s Batman run.

What do you think of this news? Do you think we are getting a new Batman game? Let us know in the comments below!

I would love it to be true. I’m ready for a new Batman game, and I really enjoy being able to play each of the bat family in AR Challenges and Episodes. I would love to have them playable throughout the main story and in the open world.

Same here. This was one of the big problems I had with Arkham Knight. They advertised the game in a way that implied that the Batfamily would have an active role in the game but it turned out that they didn’t.

Honestly, the other rumor I head was a Justice League based game by them and that sounded really cool. Don’t get me wrong I love the Arkham series but something new is welcomed.

If I can play as Batwoman, I will need to get this as soon as it’s out!

You’re thinking of what Rocksteady is working on. WB Montreal is most likely continuing the Arkham/Batman brand while Rocksteady IS working on something new. Most of the rumors indicate it’s a team-based game as service type of game.

“Whole Batfamily” probably isn’t going to mean what that currently entails in the comics, but those they’ve featured in previous installments.
That’s my guess, anyway. I guess they could introduce a couple more characters in the new one, but that remains to be seen.

If they bring Damian into the Arkham Universe, I’m all in on the first day of preorders!

Mae, I’m sorry but the bat woman show is trash. Hopefully her character is better in this game.

I hope it’s true! It’s about time they had someone other than Bats as a playable character. Running around Gotham as Azreal and Cass would make my life! Also hoped it’s not rated too high. Asylum and Origins weren’t bad but City and Knight seemed excessively crude. Some doesn’t bother me but some of it seemed to be in there just to bump the rating.

I’d rather have a Nightwing game. But after The Court of Owls being referenced in Origins but never seeing them I think it’s definitely time we get it. I’m not opposed to WB Montreal doing a trilogy of their own taking place after Origins and before Asylum.

But I still want my Nightwing game, animated movie, and animated series.

I do wonder what they mean by “the whole Batfamily.” When does this take place? Will Barbara Gordon be Batgirl, or Oracle? And what of Cassandra Cain? Stephanie Brown? Damian Wayne? Kate Kane? I’m eager to find out!

As long the game isnt locked behind the batmobile like last game then I am all in! A Co-Op game would be kinda neat too but I doubt it will have it.

In hope their is some truth to this

I doubt they use the whole Bat family, there are like so many members. I think they will keep it to Nightwing, Batgirl, Tim Drake as Robin

Yeah, it’d be a lot smarter to just use the core ones like Nightwing, Robin, and Batgirl

@ANerdWonder Hopefully they use Babs as Batgirl, she is the best one in my opinion, using Redhood would also be nice, but probably won’t happen

I’ll like a new batman game, I don’t know how I feel about another arkham game,I like the arkham series but I think it should end with arkham knight

@reachsoldierNo.1 Exactly, I don’t know why so many people want another Arkham game. Arkham Knight was a good conclusion, just let it be. A new Batman series would be the best option

It would be cool if it was true. I think it would be Babs, Tim, And Grayson. My Sone Jason prequel stuff. I feel they could add some like Cass of spoiler or even Batwoman but they may die or leave ear the end.

But really I don’t care what it is. I’m just hyped there’s finally news about some kind of Batgame.