Batman: No Man's Land (and Cataclysm) Read Along!

Have to say not my favorite art style, it I did enjoy the stories and character interactions in each one.
77 Interesting dynamic having a normal person, being able to manipulate Batman., and the perceived villain is the one ended up being saved.
78. Nice prelude to 79 with the Hatter, but I enjoyed the brief spotlight on Bruce more.
79. Back to typical hero vs villain fight amongst the ruins. Though I’ll have to say, I wouldn’t want to be one of Hatters henchman or partners.

I agree, not the best art.

I’m confused. What just happened? What was the order of events?

“only survivors survive” Really? A stroke of genius that. Never would have imagined. Does that mean only doers do? and only thinkers think? Truly brilliant! I bet only sarcastic people are sarcastic!

How did the Question get in here?

I wouldn’t want to be one of Hatters henchman or partners.

You made that note for the next issue but I am going to say the same thing for this one. That hair! Those sweaters! The belt buckles! I couldn’t do it. The only thing about them that doesn’t look like it climbed out of a Yellow Submarine knock off is the fact they aren’t singing.

Mrs Relazzo never appears in NML or anything else I’ve read again. Either she dies in the next couple of issues (Like the pig) or she fades into obscurity (Like Hardback and Quakmaster). 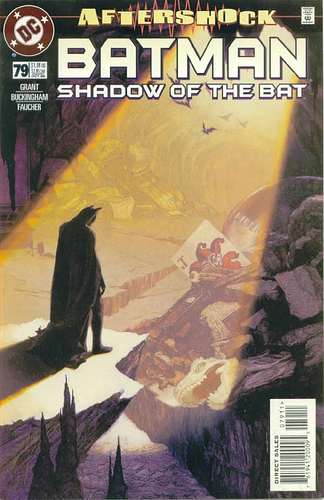 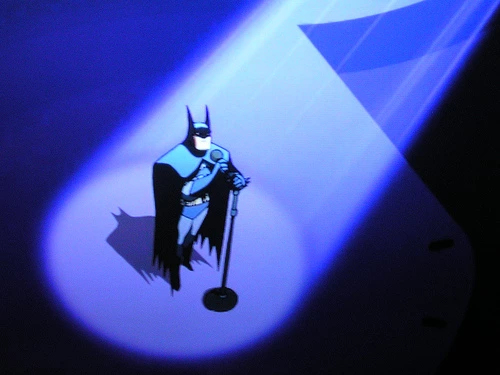 He is about to sing a moving song I’m sure.

Narcosis is cool. Why are all the cool ones one-off villains?!

“Aww boss we’re going to look stupid” - One of the Mad Hatter’s henchmen on being asked to wear a pilot’s hat.
Trust me, nothing could make you look stupider so you might as well throw the hat on.

Oh wait! Narcosis was also in issue 52! I looked him up.

Oh… I guess I know why he wasn’t in anything else.

Also, They just added Cataclysm and Aftershock storylines to the DCU! (since we are almost finished with those two, I’m going to keep the reading order we were using but I felt obliged to tell you)

Sorry this is later than usual, but I was reading Batman vs Ra’s al Ghul, which had this gem! NML is canon again! 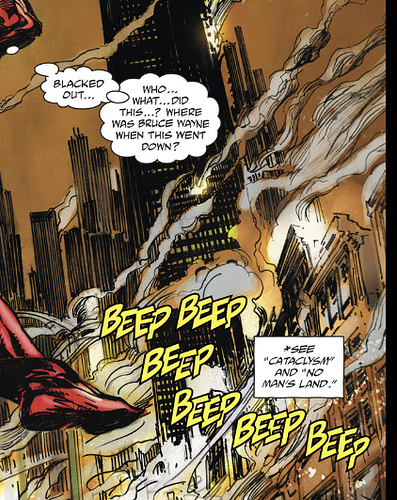 This week’s reads. Wow this week is crazy. Aftershocks ends and Road to NML begins! Also, none of the Azrael: Agent of the Bat issues below are on the service. This being the case, there are a bunch of reads this week.

Road to No Man’s Land begins

Hopefully will get to the Azrael ones, but did enjoy Alfred kicking but in BM Chronicles 14, the poetic justice on the contractor in Robin 54, and the prelude to Mr. Wayne goes to Washington in BM 560. Also the art was far superior this week.

Sorry this is all very late. Life happened. Let this be a lesson, if I can show up three days late anyone can join. Except Kelex.

Henchmen mentioned a “Quinn” not the same but I feel I should remind you that NML was the first appearance of HQ in canon!

First part with Alfred was amazing. Really a perfect example of Alfred.

Have I mentioned that I much prefer earth-2’s Huntress? Only 73 times? I’d better do it again for good measure. I very much don’t like this Huntress and enjoy the earth-2 version about as much as I dislike this one.

… A novel? This is strange.

A good story. Still not sure about the formatting.

“throwy thingy”?! That’s a batarang! and she calls herself a superhero. She should get kicked out of the family for that! eh? They made her Robin and Batgirl after this? Well at least it was because Cass couldn’t right? Right?

Hot take on Tim: I hate indecisive people. Catwoman’s good or evil? Tim’s normal or hero? I can’t stand it. Pick one and go with it!

Ah that caution tape styled side title thingy. I love it. (I have always wanted that on the side of my posts. If the mods ever owe me something or Kelex wants to make up for being wrong, that would be a great gift.

“WayneCorp” This is during early B:tas so the name hadn’t been standardized to WE yet.

I am working hard to not share my political opinion on NML here. Best not to touch that without DeSade around.

This is buildup. We are almost there! What will this week bring? Find out next post!

Shadow of the Bat #80: DC Universe

… Isn’t that Wonder Tower in the skyline? From Arkham City? I really hope that isn’t a coincidence.

So you can already see that all the criminals and invalids will be stuck in Gotham.

Also, most of the roads, tunnels, and bridges are damaged.

Okay, I don’t have any idea who two of these guys are. (top to bottom, left to right: Zsasz, Crane, ?no idea?, Dummy, Scareface, Joker, ?Zues?, Two-Face, Ivy,) Any idea who those two are supposed to be? 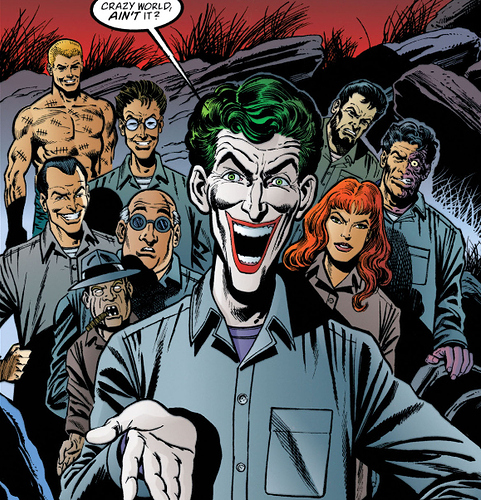 Okay, not any real story here to commit on. Just set-up.

Not sold on the cover…

Pinhead and Waxman? Never heard of them before. I assume they are going to die in this issue.

Riddler! I bet hairline up above is Riddler!

Killer Croc just walks up. He has “Killer” in his name. Zsasz is in that crazy contraption of a cage. I like Zsasz so I approve.

These are clearly out of order. Sorry about that.

BM 561love the emphasis on Bruce in this one.
BM 562 closing the city nuff said.
BM Shadow of the Bat, emphasis on Arkham and the Villains, things about to get interesting.

Shadow of the Bat #81: DC Universe

Shadow of the Bat #82: DC Universe

Nice cover! (I do have questions about the monkey though…)

What do we know about David? I know nothing. (I should specify before ridicule ensues, I know nothing about the David in this story)

Great issue! I know it’s hard to see but this is leading into an important NML plot point.

So that’s why Riddler isn’t in Gotham later. Anyone know where he went for the rest of 1999?

Nice issue! These two were great.

That first bit is a joke waiting to happen.

Have Firefly and Heat Wave ever met?

Why would anyone trust an angry talk show host with that hair cut and those tattoos?! He’s like Darth Maul, Daken, and Sam Lavine rolled into one. (That last one not being such a bad thing. Only talk show host I could thing of.) 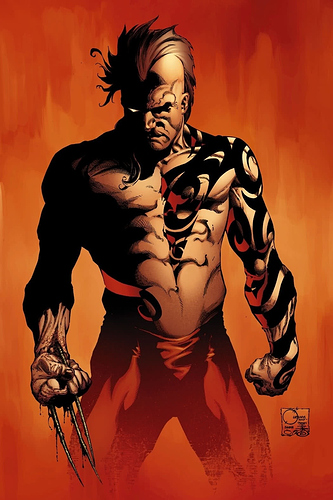 Can you tell the difference?

Renee and Harvey are pros, “What masked guy?” “Kid in a cape?”

Um… Did we lose everyone? I’ll wait to post this week’s until someone let’s me know they are out there somewhere. 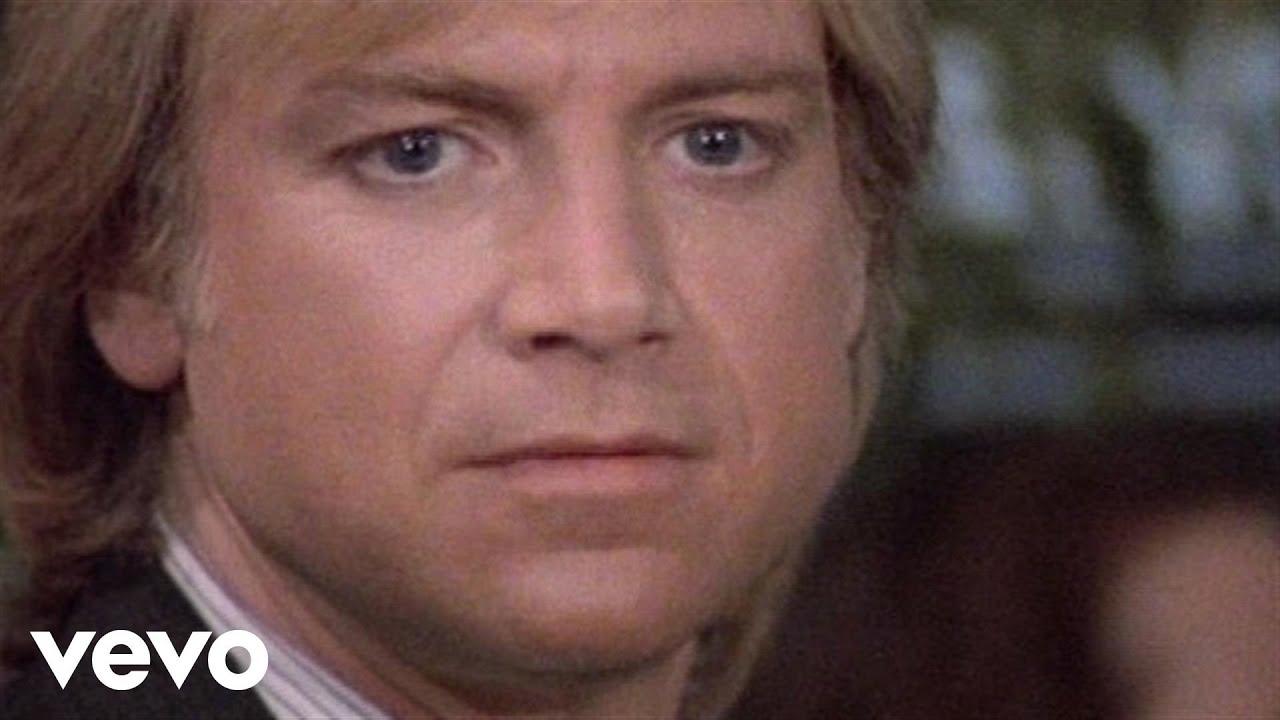 I’m still here!! I was a bit behind because the past month has left me with little to no free time

BUT I am now all caught up (and ready to continue at your discretion). I have been really really enjoying the story so far!!

Okay then! Thanks @DickGrayson_TheBoyFriendWonder! Here is this week’s! 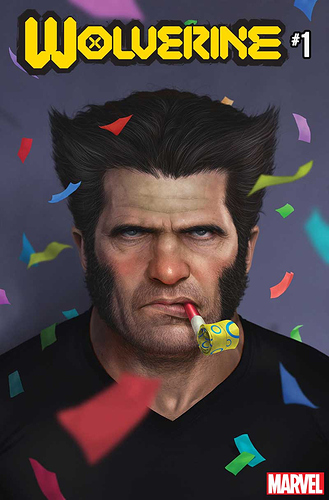 First for this week, I need to show off Alex Ross’s variant covers for NML #1. They were specifically designed so that when put together (like below) you could see the “movement.”

Okay cover. Looks more like a splash than a cover or it would get more points.

Lt. Pettit is a very important character in NML.

Dynamiter! Ah. I miss the days these z-listers could show up for an issue and then never be seen again.

Poor Jim. This is stated for the next several years as one of the primary reasons he doesn’t leave Gotham. No one else will hire a cop that runs the most crime ridden city in the world and depends on “legends of some bat-man” to keep criminals in check.

You can also see in this that they are having trouble telling the criminals (who they want to stay in Gotham) and the citizens (who they don’t care about) apart so they are just keeping them all in Gotham. (Please be wary of the politics out of this. I feel it is worth pointing out the connection from a satire perspective or I wouldn’t even mention it.)

Do all talk show hosts have access to henchmen with military grade weapons? I will never think of them the same way again.

You can also see that some Demonz are trapped in NML.

I’ve read this soooo many times.

…and after the Earth shattered and the buildings crumbled, the nation abandoned Gotham City. Then, only the valiant, then venal, and the insane remainded in the place they called… No Man’s Land!

The first page is useful for replacing the sign below used so frequently by the Biscuit Mob! 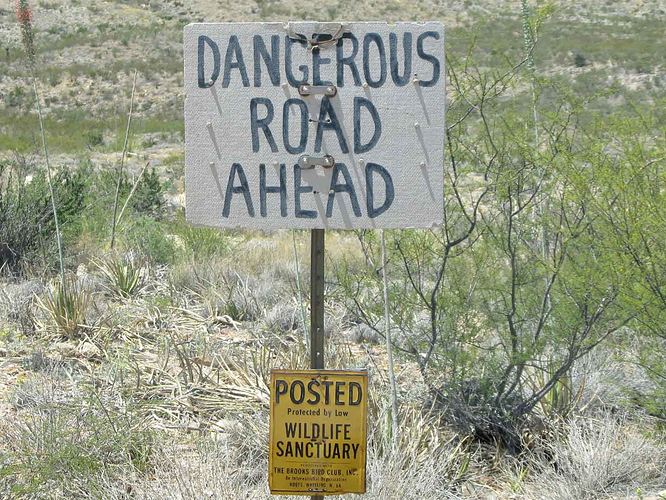 Just going to point it out again, NML is used for a lot of political satire and jabs at policies and ideas.

This is a great way to show the state of NML and build empathy for the inhabitants. (Plus Harvey is funny)

You can see the state of everyone, Scareface is a influential sector boss because of his supplies, the GCPD is a sector boss, the Penguin has a mysterious pipeline to the outside that gives him immense power, Wayne building are quake proof, etc.

This was the technically wasn’t the first map of Gotham but it was the most detailed and it has now become the standard map used (or adapted) for everything from the Arkham games, the Lego games, the Lego sets, the Dark Knight trilogy, and every comic since then. The three-island format is a very distinct factor that was added. 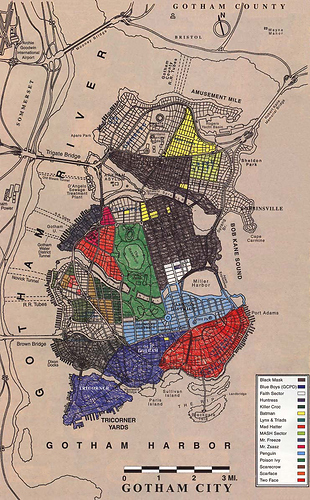 Batman apparently tells everyone (and I mean everyone) to stay out of Gotham in-between issues. It has always bothered me that they didn’t put that in an issue. It would only take one panel.

Great issue! We are in it! I’m giddy. I think I actually squealed a few times. (I of course, deny actually doing so.)

Also a thing to look out for,

Penguin’s secret pipeline and an “Outside interest” play huge roles in NML. Secret clues are hidden throughout everything as to what the pipeline is and who the “Outside Interest” is including the first issue of NML!

Great issues!!! In the Detective Comics, I really liked seeing Nightwing and Robin work together (especially since I’m not use to Tim-Robin) - it was quite fun to see.

I really liked the story telling of this issue and how it showed the state of Gotham. I’m really excited to see how this plays out!

and don’t tell anyone, @TheBatmanofNML, but I’ve also been trying to read Blackest Night… and yeah, it’s good… but I’m enjoying NML more…

Here are this week’s reads.

Shadow of the Bat #83: DC Universe

Well, they just added Arkham Asylum - Tales of Madness #1 to the service. For those that missed it here is the link: DC Universe. It’s not actually part of this week’s reading and @darkstarz found it in an anthology on the service waaaaay back on Aug 22. Thought I would share it just in case though.

I really enjoyed this week’s reading!! It was fun to see the Black Bat costume and I liked the focus on the GCPD as well (it’s really interesting to see how this “new normal” is playing out and how people are having to adapt). And yay! Batman is back with his sneaky stealthy info-collecting butler!!

also, I guess you can tell other people about how great I think this story is…

I agree! I love that costume. (Just for the record, Black Bat is somebody different).

also, I guess you can tell other people about how great I think this story is…

I always tell people how great NML is, just not how great you think it is.