Okay, so, I recently picked up Greg Rucka’s Whiteout, and caught up on his current output (Lazarus Rising, etc.), and it got me thinking about what his greatest comics so far are. My top five are as follows:

But seriously, I think he’s one of the most consistently good writers still working today. What are all of your favorites?

My favorite will always be his Punisher run

@JohnOnyx115
I forgot about that. That was pretty good if I remember correctly.

Rucka is an amazing writer. I love his comics work, but I would also recommend some of his novels, particularly Alpha and Bravo. Alpha is kind of like Die Hard in an amusement park while its sequel Bravo is an intense 24-esque action/thriller.

I was recommended these books by a friend and I was surprised how much I loved Rucka’s prose just as much as his comic writing.

The new character Rucka created in his run Rachel Cole to me is just plain awesome. How they run into each other and Frank explaining his mindset in his mission to her and both them working together. They had each others back.

I found it interesting that the avengers used her as bait for Frank when trying to put him away into the negative zone and it was Wolverine that tipped him off to what they were planning for him.

Even knowing that he still risked everything for her not because of romantic feelings but because she was a friend and fellow Marine.

Frank doesn’t have many friends but the ones he does have he will go to hell and back for.

I’m sure I’ve read non-DC titles of his, but none come to mind immediately.

@Vroom
Well, if your favorite book of his is Checkmate, my immediate recommendation would be for you to drop what you’re doing right now and find a copy of Queen & Country.

Also, as I alluded to, Whiteout is fantastic.

@Batwing52 I’ve been meaning to read Queen & Country since I first flipped through it in a Border’s store years and years ago. One of these days, I shall indeed read it as I highly enjoyed the tidbits I did read.

Speaking of Rucka’s non-comic literature, his novelization of No Man’s Land was highly entertaining.

Vroom he did a novelization of the batman story no mans land?

@JohnOnyx115 Indeed he did. Here’s an eBay picture of the hardcover edition: 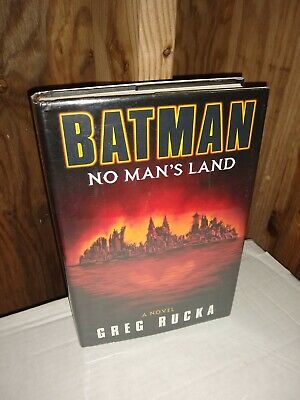 His run on Elektra is unparalleled to any of his other works.

Gotham Central was phenomenal recently read it was not disappointed