Batman and Robin find themselves in Crime Alley, where the parent of Bruce were murdered. The Phantom Strangers gives Batman the chance to go to a parallel world, where the murders are about to occur again. The catch is that this world has no stories of heroes, Krypton does not exist and this young Bruce Wayne is an awful brat. When Robin suggests that this world needs a Batman, Bruce replies, “No one should be angry all the time, especially a young child.”

The last two pages are. glorious.

Another is the hard to get Marvel and DC Present the Uncanny X-Men and the New Teen Titans, by Chris Claremont and Walter Simonson, which occurs after the Dark Phoenix Saga, and after the 13 year old Kitty Pryde is introduced.

Our 14 heroes contend against Darkseid, Deathstroke and Dark Phoenix.

Gar and Kitty are cute together, much better than the usual Gar Raven pairing ( except for fan fiction 8 Years Later by TheForceIsStrongWithThisOne)

Gar provides transport for everybody by becoming a big Dragon.

THE WALL, which the Justice League just broke, is prominent in this story.

Another story is Should Auld Acquaintance Be Forgot, written like The Detective Comics 500 story, by Alan Burnett, who was producer for most of the DCAU animated shows.

Deadman meets a young blonde woman, who was no longer in continuity, because she died in Crisis on Infinite Earth 7 and was erased from History.

Deadman is bemoaning his fate.

That is the best definition of a hero I ever read.

Then she says, “My name is Kara. Though I doubt that’ll mean anything to you”

Batman 23 by Tom King and Mitch Gerards is my favorite

I wrote one earlier but I haven’t seen anyone mention the Batman: Ego, Batman: the Man Who Laughs, or Batman: Noel. All of which are great self contained stories.

Joker by Brian Azzarello and art by Lee Bermejo.
That graphic novel redefined what comic books could be to a 15 year old me.

Batman 383. Love this issue. Just reread it. Wish we got an issue likes this today. 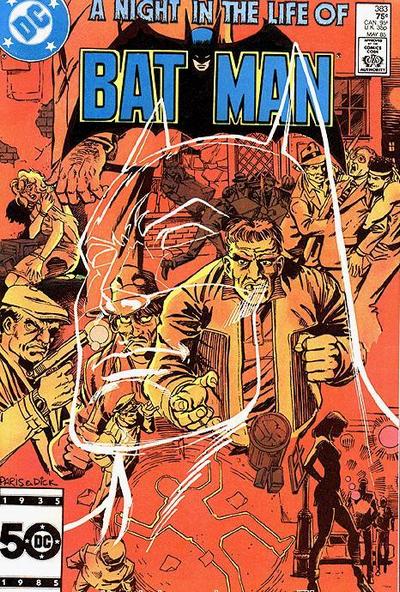 “Mercy killing” by Brian hill and dexter spy in cursed comics cavalcade features Batman and the outsiders. It’s a well done one-off. Really got me excited for the series that has been pushed back into oblivion that everyone thinks got cancelled.

“Redslash” from Batman #493 (if it counts, it’s part of Knightfall, but it’s pretty self contained”

“There Is No Hope in Crime Alley” was the first thing that popped into my mind. I first read it back in the day in Detective Comics #457 and it introduced Leslie Thompkins to us, a tender revelation to the tragedy of that fateful night. That first splash page of Batman’s profile and the alley was so striking as a first impression, and I remember being really impressed that it was Dick Giordano’s own pencils, rather than Neal Adams’. Maybe not the best, but clearly a nostalgic one for me.

It always has been–and I don’t see it changing anytime soon–Spider-Man #33, Vol1: “The Final Chapter!” by the legendary team of Lee and Ditko. Pure comic book magic!

Oh, FrankTheTank27, your pick of Detective Comics #457, “There Is No Hope In Crime Alley” is in my top ten of all-time favorite single issues. That opening splash page (remember splash pages?) is haunting. I’ve been remiss in the past when listing iconic comic artists and failing to include the great Dick Giordano. He was as great a penciler as he was an inker. And don’t forget he was EIC of DC during the company’s incredible 1980’s run. He was a truly remarkable talent.

I heard spectacular spiderman 310 was a great a issue