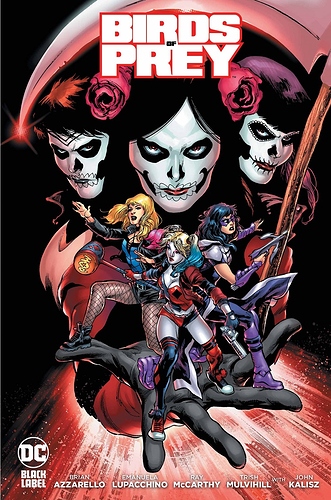 So DC releasing big new content kind of crept up on me this week, and one that released that I was really looking forward was this Bird of Prey one-shot by Brian Azzarello, and drawn by Emanuela Lupacchino. This had a…weird history. First announced as an on-going series, but after a few issues being solicited, DC announced that the finished issues will instead be released as a one-shot and under Black Label. I get the feeling that there’s an interesting story behind all of that…

Storywise, it’s pretty interesting. It reminds me of the movie in that it starts out with the same four leads – Black Canary, The Huntress, Renee Montoya and Harley Quinn – being in separate places dealing with their own issues, only to be thrust together and forced to team up, this time against a twisted drug syndicate looking to be the new kingpins of crime in Gotham. I don’t think it holds quite the same charm as the movie, it’s more dour and introspective.

There’s also a couple of odd decisions to take characters in the story. Renee’s arc felt really weird to me, and fans of the DCYou Black Canary series might not like where he takes some of the side characters from that series. I would say that the Harley stuff was pretty well done, though. She comes off as someone very demented, but also wanting to do something sort of good. She also has some really cool moments that references both Azzarello’s Joker graphic novel and The Killing Joke.

Art was pretty good, though. Lupachinno at times may come off as a sort of pin-up artist, but she really does a great job with emotion and mood, though I think it might have still been too light a style for the story she is doing. Ray McCarthy also does some pages and I didn’t even notice too much while reading, so kudos on trying to keep to the same style.

Overall, I’m not sure if I would be too hot on this as the first three issues of a series, but as a one-shot, it’s pretty solid.

Did any of you pick this one up? What did you think?