Blue Devil Poll: Stunt Man in a Devil Suit in a Disco Pirate Costume, or Demon in a T-Shirt? 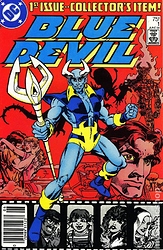 Blue Demon’s basically the Ship of Theseus at this point, changed to the point of being a different character. My personal opinion is that the changes are uninspired and have made him bland and boring; the idea that a stunt man was a friggin engineering genius, but all he wanted to do with his revolutionary robotics was make action movies, is stupid, weird, and fun. The idea that uhhh he was that but then he ummm also became a real demon errrr? YAWN.

But now YOU get a say! But consider, too, the VISUAL designs. Does a black t-shirt cut it for a superhero costume? Also, consider that I’m right.