Bombshells - Can I get a witness?

DC Comics: Bombshells (2015-) and its continuation Bombshells: United (2017-) were an unexpected delight. I did NOT think I would ever find myself binge reading them, but that is exactly what I did, and now I find that I know absolutely no one else who enjoys these comics.
Is anyone out there a Bombshells fan? Who was your favorite character? What was your favorite twist?

Definitely a fan here and of course for me it’s Kate. Love everything about how she was portrayed!

Yes! There is another out there in the universe! I heartily agree. I think she was portrayed beautifully. Supergirl became my favorite character before I read the series and she stayed my favorite throughout. I never knew I needed Supergirl and Lois in my life until I read it.

The art style is really beautiful and having all these wonderful DC women in one series is so great. They should really do more!

Also, there is a Q&A with Marguerite Bennett on Monday but I can’t make it, so sad:

[Marguerite%20Bennett%20Social1080x1080] Starting Monday, October 28th at 2:30pm PST, we’ll be hosting a live Q&A with the DC Bombshell herself, Marguerite Bennett! She’ll be joining us LIVE for one hour from her very own verified account to answer YOUR questions about her start in comics, her take on the babes of DC, and any other questions you’d like to ask. Be sure to add your question in the comments below, and come back here at 2:30pm PST next Monday to find out the answers!

They really should make more. Thanks! I missed that when I looked at the calendar this morning. Unfortunately, I also will be unable to attend. The joys of work.

I read it for the Pride Book Club when that was going on during Pride month, and after reading the first eight issues, I was hooked. I’m not plugging at it at a super high pace, but I recently finished the second trade’s worth of the book so far. Really enjoy the crazy alternate history of it all.

Oh, if you’re looking for a little more Bombshells stuff, there’s one that I don’t think a lot of people might know about, part of the mini-series Harley’s Little Black Book. For those who don’t know, it was a six issue mini-series, each issue double length, having Harley Quinn team up with a crazy guest star often with an amazing special guest artist.

In issue #4, we see Harley of the regular DCU world get dropped in the middle of the Bombshells universe, with some pretty hilarious results. 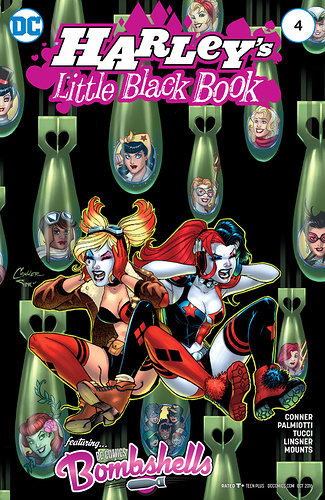 The joys of work.

I only started reading some of Harley’s comics recently and haven’t made it very far. Thanks! I will definitely check this out!

The whole mini-series is pretty fun, I’d definitely recommend it. It has a wide variety of crazy team-ups and even guest artists – like the issue is after this is Palmiotti/Connor teaming up with Neil Adams to recreate the famous Superman vs. Muhammad Ali comic with Harley putting on the boxing trunks.

And the best thing is, it’s not super tied into any major continuity, so you can just jump into it no sweat.

It’s on my bucket list and especially after the way you put it I might start reading tonight.

I loved Bombshells, but the continuation didn’t keep my interest.

I think I enjoyed the sisterhood between Stargirl and Supergirl the most, but the bats were a delight to.

The sisterhood between Stargirl and Supergirl was indeed beautiful.

I understand what you mean about the continuation, though I did still enjoy it. Somehow it didn’t seem to have the same flow. I only wish there was more Supergirl and Lois time

Bombshells was amazing. I loved how the art fit the tone, and yet they really managed to put some stakes in it with the almost unspoken rule that they could only defeat the BOSS level bad guys via sacrifice, somewhat literally (#RIPStargirl) also, they had real loss feelings that reverbated. Kate’s attiude was great and her story compelling, she was my favorite… but, you know, always batty for her… with Harley being a solid second. The series went as far as it could I think, but I wouldn’t mind a “tales” drop here and there to dig into the details of characters hinted at and left behind, like Starfire or Jessica Cruz.

Same. I’m so excited to read the issue @Jay_Kay mentioned earlier from the Harley mini series.

There are so many reasons I loved the series, but one of those reasons was how they really completely changed the world these characters are normally in. It was a complete AU, but it made it even more enjoyable because it really meant the normal rules and characteristics of these characters no longer HAD to apply.

I would love to see them do tales for the individual characters! Where they are now, or as you mentioned ones that are no longer with us.

I tried reading a story line or two in Bombshells: United. I did not like it at all. To be fair, I’d barely glanced at the first series, so maybe the story would have made more sense that way, but I found the narrative extremely convoluted. I was constantly saying, “Oh, I guess that character can do that? Okay.” The characters didn’t grab me. Bennett seemed more interested in pontificating about World War II politics and human nature than exploring the story. I’m fine with this if it’s interwoven with the story, but not if characters just stand around acting as a mouthpiece for the writer for huge sections of the story.

I will say the designs for the Bombshells are all a delight, but I figure the figurine artists deserve the praise for that.

I understand where you’re coming from, and love the input. Honestly, reading the first series would not have helped you understand the second any better. (Well, not for the majority of it anyway) First series to me was very enjoyable! I did have to push through the first few issues of Bombshells: United to kinda get back into the flow of the story, but I did still enjoy being in that world with those characters.

It’s not a series for everybody, obviously, otherwise I wouldn’t have felt the need to start this topic or even ask the question

My favorite character is Wonder Woman’s second cousin from the Amazon who joined the fight to help her defeat Ares.

Just so you know, the Bombshells: United series was actually the second series in that universe. Try the first series “DC Comics: Bombshells,” where you can see where these characters started, and it might make more sense.