Not to worry. Helena gets in on the action as the story goes on.

Jumped into Robin III. I read the Huntress mini a few weeks ago so I skipped that part and came back for Robin.

Just like I remember it. I think this series was my introduction to both Tim Drake and the Huntress. I only have a few issues in my collection, so this is the first time I’ve read from start to finish.

It is what I remember. Tim Drake is a bit teenage angst. Helena is a bit… one dimensional. She has a life outside of being Huntress but because this is Tim’s series it isn’t explored much. Just a few hints here or there. It’s funny, from the Huntress’s perspective she has way more experience and is a way better crime fighter than Tim. Reading the series it doesn’t come across as that. It’s more we can do more working together than apart. Other than her being some muscle that is not Batman, I’m not sure what sets her apart from another Gotham crime fighter in this series.

I think because she has no personal stake in this story, She’s hard to either like or dislike. More like she is just there with Robin.

I finished Robin III: Cry of the Huntress this morning and honestly, I think it was kind of lame. Like, Tim himself is okay enough – I feel like the situation he’s in is more interesting than the boy himself, much like always – but the villains in this story are just awful, and Huntress, like @Meisaj said, is very one-dimensional and doesn’t contribute much.

I decided when I started this that I would rank the books that I read for this Huntress month, so to start:

Hopefully the next two stories will be better.

Just starting on the 1994 mini-series and it’s pretty interesting so far. The art of it reminds me a lot of Frank Miller’s Sin City, with it’s use of blacks, the unique shading and use of select colors. So much so that apparently at the time Miller criticized in letter pages the artist here, Michael Netzer, for mindlessly aping his style, along with Jim Lee during his work on Deathblow.

Robin III was definitely the weakest of the Robin minis. And it definitely loses something without the fancy lenticular action covers!

Helena was just kind of there, but I think she came across as the tough vicious vigilante here more than she did in her own title. I could see a smidge of the elements of what they highlighted in the Birds of Prey movie here.

but I think she came across as the tough vicious vigilante here more than she did in her own title.

I’m not sure I fully agree – she comes of as cynical, sure, but she’s not even that vicious or capable – Tim has to save her in the end when really, considering how long she’s been in the game, it should be the other way around.

Speaking of cool covers, the cool thing about this four part 1994 mini is that all the covers when put together connect in a really cool way: 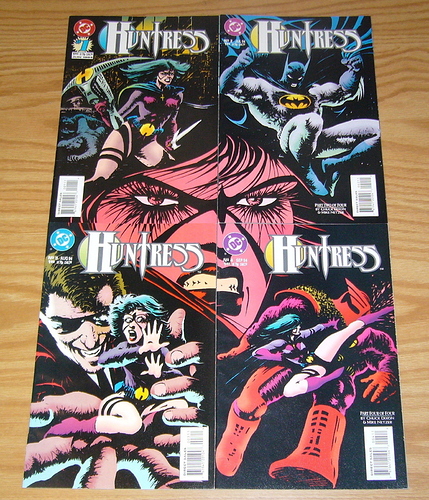 Anyway, finished the 1994 series and overall I liked it. It felt more concise and tight than the initial six-issue arc in '89, and I like that unlike that series, it actually makes the story about her molestation as a child a forefront of the story, giving it a bittersweet conclusion instead of just stapling it on for shock value.

Art wise, like I said it reminds me a lot of Frank Miller’s Sin City, though I think some of it that reminded me of it the most was in the writing in relation to it – which makes sense because Chuck Dixon has borrowed a lot of elements from Frank Miller over the years, and this is probably the one that works better. For example there are many pages that have a splash image with writing along the left or right-hand side, much like many Sin City stories. There’s even a line in the third issue that reminds me a lot of a line from “That Yellow Bastard,” which ironically enough came out two years later.

Helena herself is interesting in this. She feels rather overwrought and kind of a hot mess through most of it, perhaps more dramatically so than usual, but maybe I’m just used to the Helena post BOP. I did find it weird that she would just…let a kid hang out in some sort of pit for several days with minimal food, that was…kinda screwed up, honestly.

Anyway, weird, over the top moments aside, this might be the strongest of these stories so far. So my new ranking is:

Now onto Birds of Prey: Manhunt!

Yeah, sorry, I meant attitude-wise, not necessarily in her execution.

Just finished the '94 series and I completely agree with @Jay_Kay that this has been the best so far. I don’t think Chuck Dixon nailed the ending here, but I enjoyed this quite a bit. I wonder if he was bothered, too, that the child molestation had no payoff or impact in the monthly series and set out to address that here.

Just finished issue 1 of Manhunt and…more than likely it’s better explained in the following issues, but from the flashbacks we get here, it feels like both Huntress and Black Canary basically stormed this hot guy’s skyscraper fortress solely because he ghosted them. Which I can understand, but is still kind of funny.

Manhunt wasn’t bad. Not exactly memorable, but not bad. I wonder what the reception to this would be today - it seems to be going for a more “woke” vibe than the BOP/HQ film did and the latter got so much (stupid) flack for it. Huntress didn’t seem to have much chance to shine here, but I’m not sure any of the characters did.

I also liked the 94 better than the 89 series. I agree with @ralphsix that Dixon didn’t quite nail down the ending but the overall story was enjoyable. I also wondered if he felt the child molestation plot thread was basically just a throw away line in the previous series when it should have been dealt with in a more serious manner.

Manhunt was just a bit of nonsensical fun. I was looking for something a bit lighthearted after the previous issues and this fit the bill. I probably enjoyed it more than I should have.

@ralphsix- My guess is that it would get a lot of flack from certain quarters for being far too “woke”.

I probably enjoyed it more than I should have.

I think it deserves all your like. It was a entertaining “popcorn flick.”

And I do like an entertaining ‘popcorn flick’ every once in awhile.

I suppose I’m in the minority here. I’m not really that fond of Joey Cavalieri’s work in general, but I find his 1989 series decent enough. Dixon’s 1994 miniseries, on the other hand, was terrible: a third-rate Miller knock-off full of stupid characters.

I mean, you’re not wrong, but I found the 94 series better still. They may be knock-offs, but at least they were more interesting to read.

I disagree, but Dixon redeemed himself with that silly BoP story.

So I went and finished up Manhunt, and I will agree it’s a pretty fun mini-series. Lots of funny/cool interactions between the three main ladies, but also some cool narrative threads to what we’ll later see in Gail Simone’s run on BOP; not just Huntress’ inclusion to the team full time, but the dynamic with Black Canary and Lady Shiva. Again, the villain is kind of weak-sauce, but he gets the job done of being a good instigator that gets our heroes moving.

So right now my ranking is:

I’m waffling a little on this because while on one hand this is probably the most solid of the books here so far, it’s also the one that has almost the least amount of Huntress in it, and part of why I ranked Robin so low was that she really didn’t do much than drink sodas from hotel fridges and get kidnapped.

But I’m probably over thinking it. Either way, considering what’s coming up next week, it’s going to go down the list anyway.

Yeah it was just a fun little mini overall. Next week though… So much good stuff there. I had difficulty even choosing something from BoP at all since Simone’s work is simply the best.

So I finished Birds of Prey #56-59, and unsurprisingly, it’s really good. I’ve read this arc a few times in the past, and it still holds up. In terms of Huntress stories, she’s not the primary focus, but she has some good moments and I think her presence in this takes what was already a decent book and team and truly makes it the iconic superhero team it is today.

All that’s left is Batman/Huntress: Cry for Blood, which I’ve read before, and the only Question I have is whether it will make #1 or #2 on this list.