To start this off… 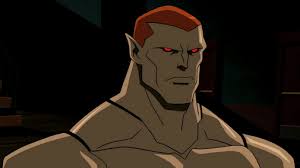 @Vroom agree whole heartedly will all except Gleek. I know he’s stupid, but he olds a special place in my heart from childhood.

-Penguin. Well except for the GOTHAM tv version. That ones pretty cool .

I’m a firm believer that even your least favorite characters can be great in the right context. Amazo, for instance, has an incredible story in Justice League Unlimited.

@HubCityQuestion His arcs in JL/JLU where well done. But that still doesnt get me past his premise. Human doctor build robot that can replicate Superman, etc powers with a simple scan. blech

I really cannot stand Felix Faust.
I think it all stems from reading 52, and how he tried to manipulate Ralph Dibny, and get Ralph’s soul for Neron because Faust had no soul left because of selling it off to so many demons (if memory serves correctly).
This is why I was so satisfied with how that story ended.
Faust still really gets under my skin. I love seeing the snot beat out of him. I love seeing him tortured and in agony. I just have no love for that guy haha.

The new Blue Beetle. I want Ted Kord back in his bromance with Booster Gold.

Its not his fault though. If he had been presented as a Blue Beetle from an alternate Earth or a Robin type relationship with Kord, all that would have been fine. But I miss those Blue/Gold teamups. Some of my all-time favorite stories cane from those 2.

So, I guess it isn’t that I can’t stand him. Its that the old Blue Beetle is gone. And that makes me sad.

@LonelyLobo Ted Kord’s been back for awhile. He was Hyme’s mentor in the latest Blue Beetle series. Granted I didn’t read the entire run, but what I did had Ted alive and kicking.

Okay, two characters I can’t stand? Hawk and Dove. Ditko created them as a satire of pacifism, purposely making a completely ineffectual hero for Hawk to bully into his proactive sense of justice. I love Ditko, but it’s not his best work.

They’re all right in Titans, but mainly because they’re nothing at all like their comic counterparts.

@biff_pow LMAO! I admire your courage.

Yea I hate Amazo too. Because that seems stupid then why doesn’t every one replicate his abilities.

Gets out the list and picks a random entry

Mr. Zsasz. He’s literally the most generic possible Batman villain. His gimmick is that he kills people, and… that’s it.

@HubCityQuestion: I think Hawk and Dove could be cool if they both got a fair shake, but Ditko made Dove an ineffectual idiot, and every writer since Ditko made Hawk a hotheaded idiot.

@biff_pow: I’ll give you some backup here. She was kind of sympathetic (and occasionally funny) as a gimmicky hench-jester with the occasional Poison Ivy team-up, but this current pseudo-Deadpool approach just makes her grating. I mean, I make a point of avoiding her books, so maybe they’ve done something interesting with the idea since I gave up but I just don’t care enough to go back and check.

Don’t get me wrong, I loved Harley on BTAS with Arleen Sorkin, but since then, yeah, like Deadpool, she’s just a lot. She’s a very lot.

But how can you guys hate Amazo?

I love that dork!

I loves me some Amazo, especially when Doug Mahnke drew him.

Amazo is #1 especially in Young Justice

Batman: It took 4 hours for the League to take down Amazo.

I’m gonna join biff_pow and throw out an unpopular choice…

Another character I can’t stand: Amygdala. I cringe whenever a writer pulls him back from obscurity. I’m pretty uncomfortable with villains whose entire gimmick is that they have a mental illness, and Amygdala is the most bald-faced expression of that trope.