Fellow distinguished DC Comic Book Art Connoisseurs, partially to celebrate the new arrival this month of the animated Batman: Gotham Knight, for the next two weeks of cold January I beseech you all to gather round in this very room to share and discuss…. Batman Art of the 1990s! 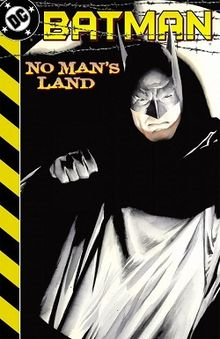 What an era that was! Knightfall DC Universe , No Man’s Land DC Universe , and on and on! Over in the rebooted JLA, Morrison and then future 90’s JLA writers portrayed Batman as the Ultimate Man in the mid-90s who truly should be feared for his cunning and stealth! DC Universe The sheer weight and volume of Batman-related titles in the 90s was a pure tsunami of noir detective excellence*!!

Best of the rest: (thanks to https://comicsalliance.com/):

To help your thinking further, check out these links at your leisure, fellow elite club members! 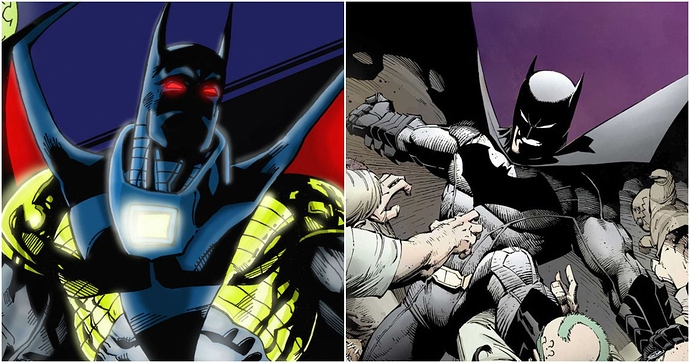 This list is going to take a look at Batman's comics over years and rank the decades of his 80-year existence. Find out how each decade fairs. 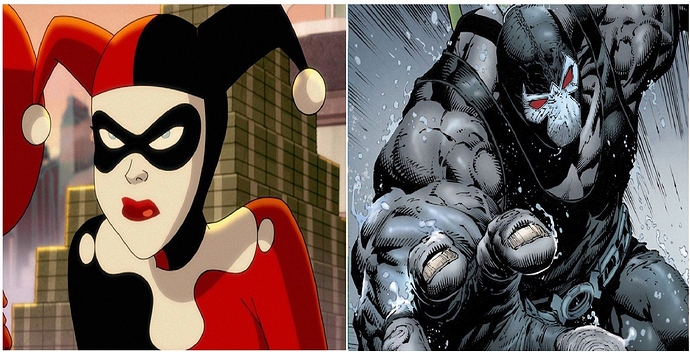 10 Key DC Characters Who Debuted In The ‘90s

From Harley Quinn to Bane, here are some of the most notable and iconic DC characters to debut in the '90s. 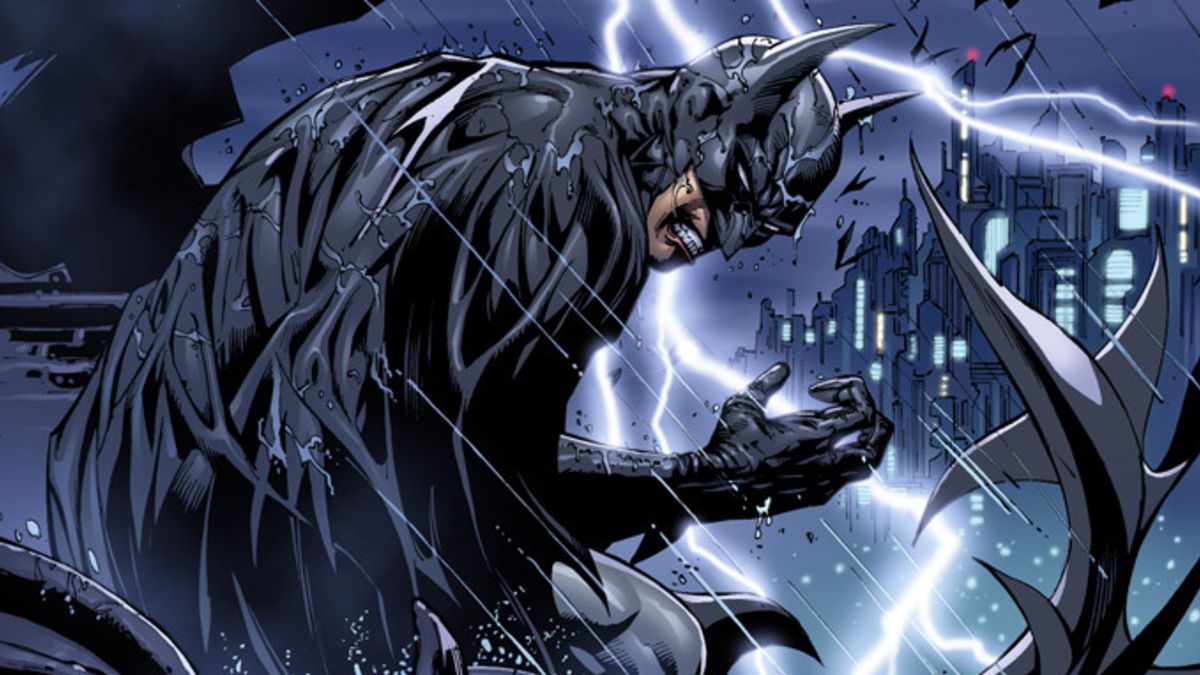 Batman's appearance is intended to provoke superstitious cowardice among the criminal element of Gotham City — but it's also become a part of our culture. The bat-ears, cowl and dark silhouette are instantly recognizable. And when you think...

Post away and let us know your favorite artists, covers and panels of that most unique Bat-decade, the 1990s!

I could scarcely disagree more with that decade ranking article. The 2000s mostly sucked, the 80s were not that interesting other than a handful of painfully overrated miniseries, and the 2010s inflicted Tom King on us (and just in general, the Flashpoint reboot). 70s and 90s are really the best (though I’m personally partial to some of the earlier 40s stuff). And, not too coincidentally, those are the two decades most heavily influenced by Denny O’Neil (as a writer in the 70s and as group editor in the 90s).

In terms of art, I’ll need to do some digging to find some good images, but there was some great work by Jim Aparo and Graham Nolan in the '90s. Here’s a great cover by Nolan that I happen to have on hand for fairly obvious reasons: 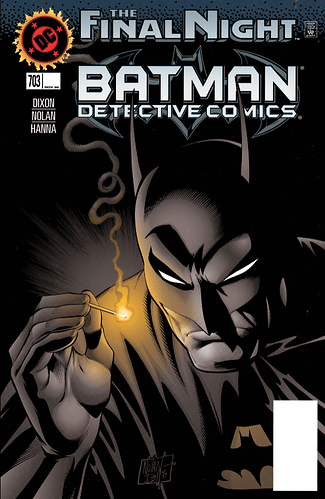 Great choice! In fact, I believe that cover is the exact same image that we use for the flare for the DC Comic Book Art Connoisseurs Club!

Would most agree that The Long Halloween was one of the more visually stunning series for Batman in the '90s? 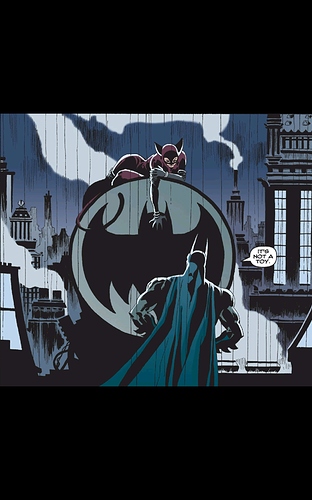 I was a little skeptical about it going in, but Tim Sale’s art is very cool and moody.

Well, OK, if you like the Gothic, surreal stylings of Kelley Jones, he did some extensive work on the Bat-books in the '90s, distinguishable by the exaggerated features of Batman’s cape and cowl, and, notably, several instances of what might be termed stark, single-color backgrounds. 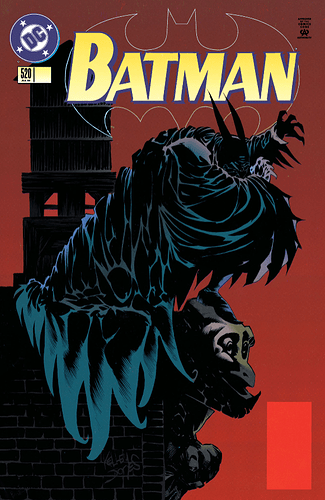 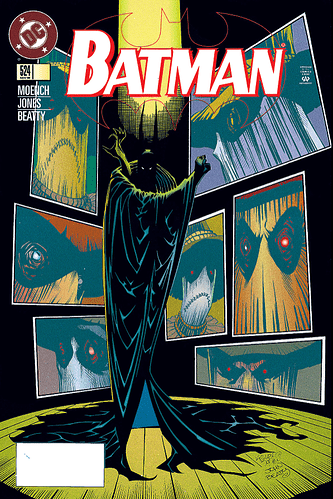 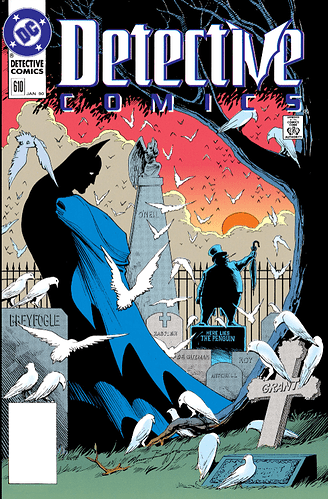 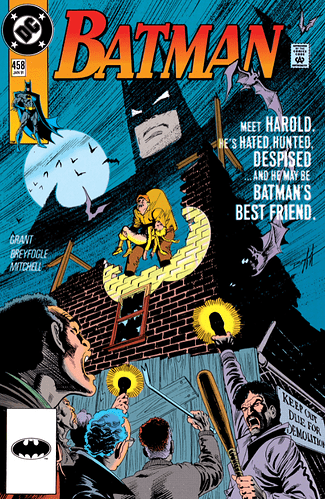 Norm Breyfogle 2585×899 941 KB
I could probably find a better example if I looked through actual issues, but I think this cover shows a bit of the Timm resemblance. Also showcases Breyfogle’s tendency to draw Batman’s shadow mysteriously looming over other characters. 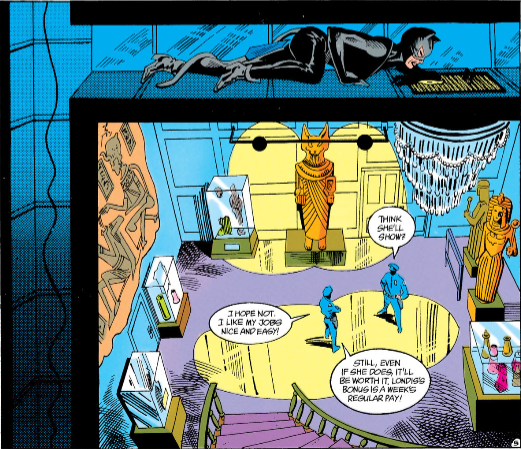 I also remembered this panel from Batman #461. 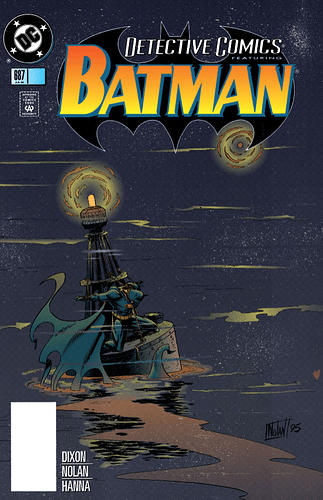 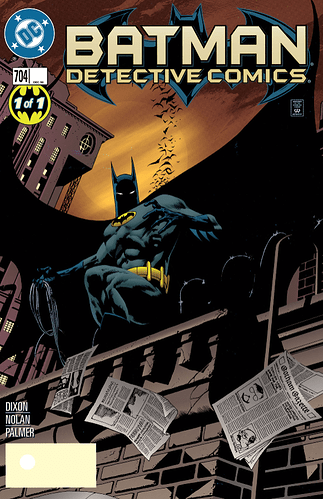 The decade also saw a lot of work from legendary Batman artist Jim Aparo, both in the early years with Marv Wolfman and Peter Milligan, and towards the end with Chuck Dixon and Doug Moench.

Oddly, he did almost no covers, but as an interesting set of bookends, here are a couple of interior images from January 1990 and February 1999, both by Aparo (the latter being his last issue of Batman or Detective Comics): 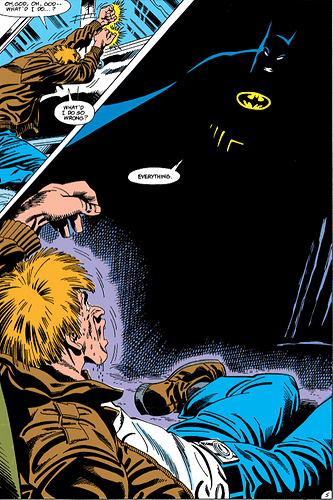 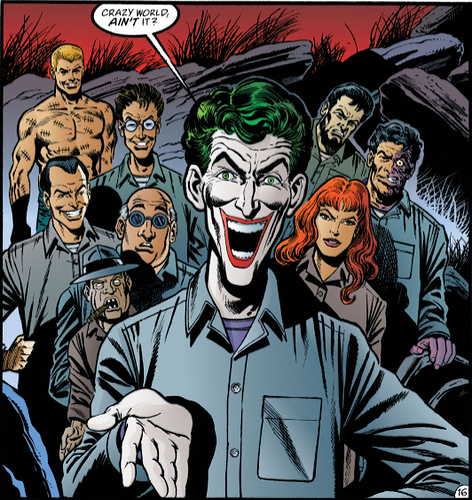 And this friends is why we like to read comics
… great art that tells half the story!

I basically grew up on Jim Aparo artwork. His Spectre in Adventure Comics of the early 70s is memorable and unforgettable.

Nolan’s art has quite the noir atmosphere that fits Batman storys so well.

Norm Breyfogle helped give us the Ventriloquist and Anarchy. I also enjoyed his version of Prime over at Malibu ultraverse Comics back in the early 90s. 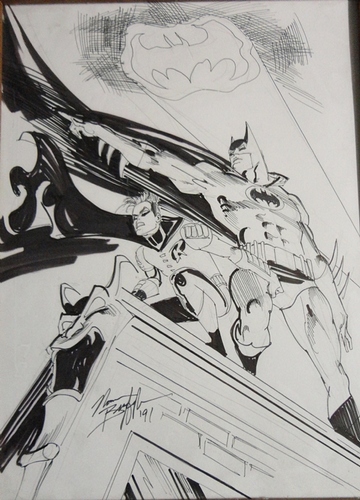 I just received this in the mail today from Lone Star Comics as I continue to finish up having all the 1 million DC Comics this is a little Bat-example of Scott McDaniel , November 1998. 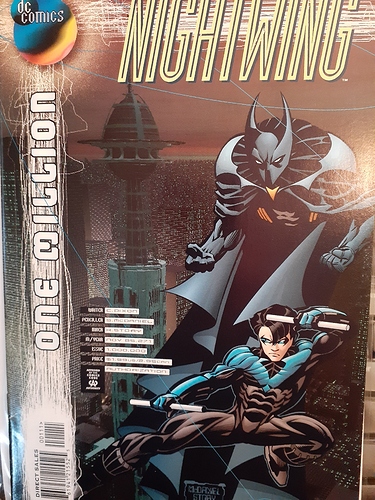