Uhhhh. So comics here and Comixology. There are a lot especially trade books. It looks like more in Comixology than here. Is that why more comics were added on this app? Things just got interesting. I wonder if subscription here will take a hit since most people are just looking for comics. 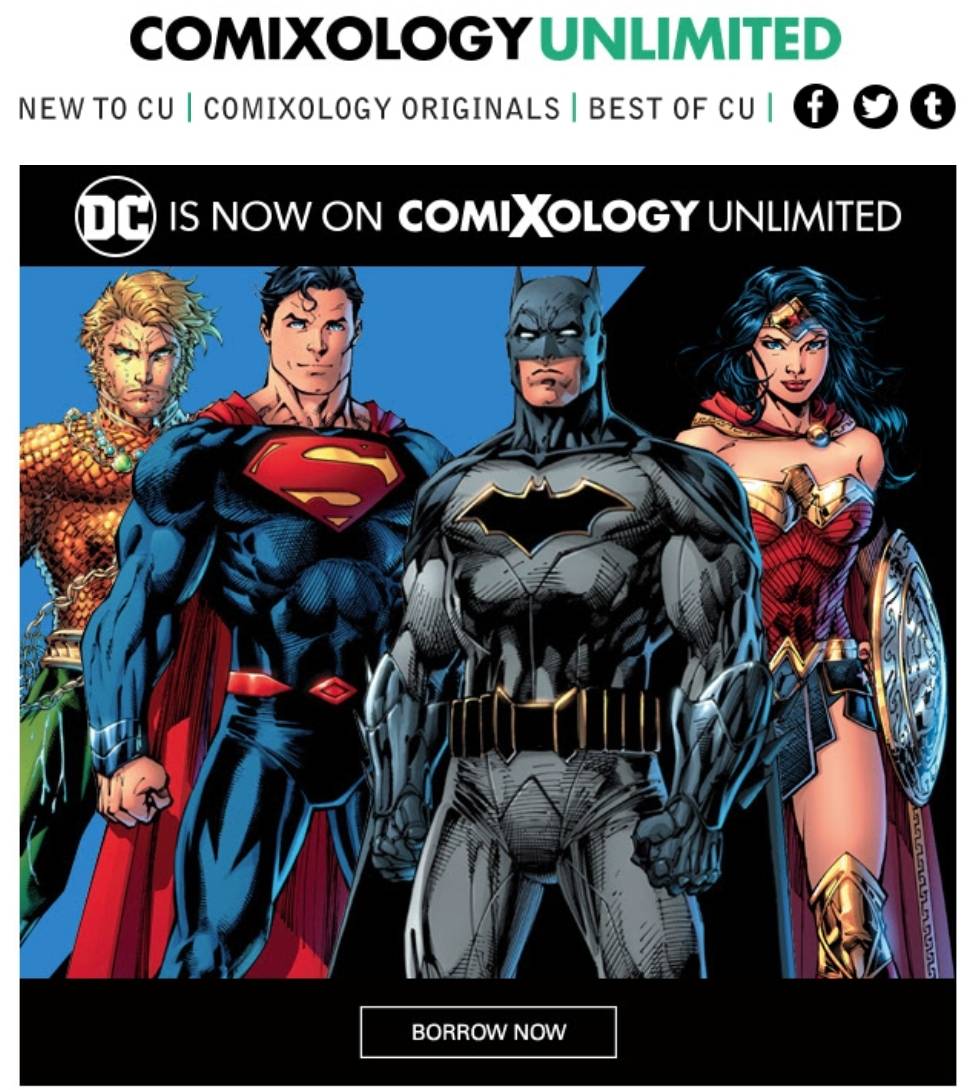 @E-Dot, DC is good friends with comiXology, so we will always make sure that we can bring value to their service! That being said, we are excited about how we’re building up DC Universe, and the variety of entertainment we offer here. (Original programming, sub-based contests, exclusive content, DC Daily, etc.) We’re happy to continue supporting comiXology, while also working on the different ways DC Universe can serve its fans.

Forgot to add, its Comixology Unlimited.

This is a game changer. DC must have planned something if most people are looking for comics but it’s now in Comixology Unlimited subscribers.

I am slightly upset that there is more on Comixology unlimited than here but in the end, I’m here for the shows and not comics

I just saw the email. They have a ton of stuff that I’ve wanted to read or revisit. Gotham Central, 52, Johns’ run on GL. Those are three I saw just by looking at the site for a minute. Wasn’t expecting this.

Whoa that’s pretty major given DC was the last big holdout. Glad I signed up for Unlimited last month!

I actually just recently signed up for Comixology Unlimited as well. I’m still in my free month trial from Amazon. I mainly signed up for Valiant but this is icing on the cake. I know it’s not there yet but just like with Marvel there will probably still be a reason to keep both services for the comics. Just more stuff to choose from. Either way, it’s a great day to be a DC fan.

I wish I could edit my previous post since I wanted to clarify. What I meant was that Comixology has Marvel content on it but it doesn’t really compare to the amount of content available on Marvel Unlimited. If they keep adding stuff here and not rotating stuff out, a similar situation will likely occur here eventually. Comixology will be a great companion piece, not an intended replacement.

I agree but with Comixology in the picture unless this app becomes their “Marvel Unlimited”, I can see plenty of people who are just here for comics leave and join Comixology Unlimited to be honest.

@PeteyParker, DC Universe has been on the scene for about 3 months, so these relationships and libraries will be further nurtured as the platform matures. I completely understand the comparison, but another component to consider is that DC Universe is a service that offers every form of entertainment, and does not aim to be a pure comics provider. I hope this clears things up

@Applejack, I’m with you on that. I probably wasn’t explaining my point well enough.

AJ, with all due respect, its really time for a roadmap 2019. We need answers on what this service is going to be. Right now, its really feels like its just the original content plus whatever leftovers are available at the time.

To be honest I’m here mainly for the comics. The original shows are fine, but that’s not the main draw for me.

If you buy new digital comics weekly, you get a 15% discount on new issues when you sign up for unlimited.

For me it means I’m going to be saving over $18 per month, just for signing up.

I’m in. Haven’t signed up for it yet but I will.

There are currently 20 DC graphic novels in Amazon’s Prime Reading program (free to download/read if you have an Amazon Prime account).

There are 313 (!!) DC graphic novels in the Kindle Unlimited program through Amazon ($9.99/mo). I think these are the same titles offered through Comixology, at $5.99/mo. It’s an amazing # of books (and full storylines, since they’re graphic novels), and much better than the sloppily “curated” selection we got here during our first months of the service. I wonder if Amazon will remove large swatches of titles without preparing their customers, as continues to happen here?

How can people not get frustrated with DC Universe, if they’re here for the comics? I was actually happy for a few days, when new titles were finally added last week, after months of vague “we’re working on improvements” posts from the moderators. Then suddenly my “read” lists got smaller as older titles disappeared this week, without advance notice. I get that the new titles couldn’t be announced until the deals were finalized… but there’s no good excuse for not knowing, and not letting US know, about titles that would disappear (while many of us were in the middle of reading a story-arc or a single issue; or, while many of us made choices to read different books, not knowing another favorite would soon be unavailable). This is terrible customer service, and the moderators know it.

So can we get some more direct communication? Instead of saying “we’re adding titles and making changes” – let’s be honest and clarify that the “changes” can refer to “removal of issues/titles” – and let us have some advance warning of when such removals will happen.

I wonder if this was a compromise to have the DC Universe app on Amazon devices. DC held out for so long. I’m glad I’ll be getting some good books through Amazon Prime.

@NPrentiss Yeah, I’m so bummed they didn’t let us know about the comics that were leaving. I was in the middle of reading two titles they pulled. They had said that titles would no longer be pulled. Had it not been for the simple fact that I was going through another random thread a few days ago, I would not have known titles were getting pulled. A mod said certain unpopular titles would get pulled in a comment. I was able to read some more issues of an unpopular title because of that heads up, but it’s not like I knew which titles were unpopular so I just had to guess.

@NPrentiss it was actually mentioned in one of the other topics that many of the titles that were removed are due to the changes they are implementing and will be returned in the next couple weeks as the process is completed. I know that doesn’t help at the moment if you were currently reading one of those titles but at least it sounds like they will be back. Perhaps a “Please Excuse Our Appearance” post should be made in the Watchtower section to remove the need to find that information in one of the various posts.

Wow. DC has finally joined Comixology Unlimited and people still b**** about it. Unbelievable.