I see so many people complaining about Diamond, just to defend them when someone (DC) finally stands up.
I hope DC does a MUCH better job with shipping and with returnability for the shops than Diamond. No other retailer is responsible to shoulder the burden for periodicals like LCS’ have to. A BUNCH of changes now that AT&T are in charge

A BUNCH of changes now that AT&T are in charge

For me I worry about my LCS dropping DC and making me go somewhere else. And not a fan of our big box store comics. Did it for a month and the shop guy wasn’t very personable. And my shop flat out refused the idea when I floated UCS at all. We will see.

As much as I dislike big companies, I’m shocked that DC doesn’t just partner up with Amazon and Kindle Direct for printing and distribution. They’ve already got the infrastructure and distribution network in place to get things done.

It will be interesting to see how this change will benefit or hinder future releases. I am surprised they went with the two distributors they chose but I will hold off on any opinions until I see how this plays out.
@Aurora Amazon is very good at screwing over companies and making them spend a lot of money for distribution. They are okay but not a bed a corporation wants to fall into if they have other avenues to choose. As it is indie authors run into problems with them so probably not worth the hassle unless they are the only option.

I am an indie author and they do handle my distribution. I did try to avoid using amazon at first, but I find them actually tolerable compared to other alternatives. Shipments from Ingram frequently arrived damaged or sometimes not at all, and no one I know has been having good experiences with Lulu. There aren’t many other options out there for indies without going full on vanity press.

It will be interesting to see what happens. I’m glad that Diamond will no longer have a monopoly on the market, however the timing is kind of a bummer. Comic retailers are already struggling, and now they have to figure out a way to adjust to this. I also wonder if this will lead to any layoffs for Diamond with them having had to delay shipping and now losing one of their biggest accounts.

I’m not at all saying DC shouldn’t have done this, I just wish circumstances would have allowed for the decision to come at a less chaotic time.

It certainly seems like a rough time to cut ties. Newsarama did a piece saying as much. I don’t want the brick and mortar stores to disappear, this sucks from their perspective. 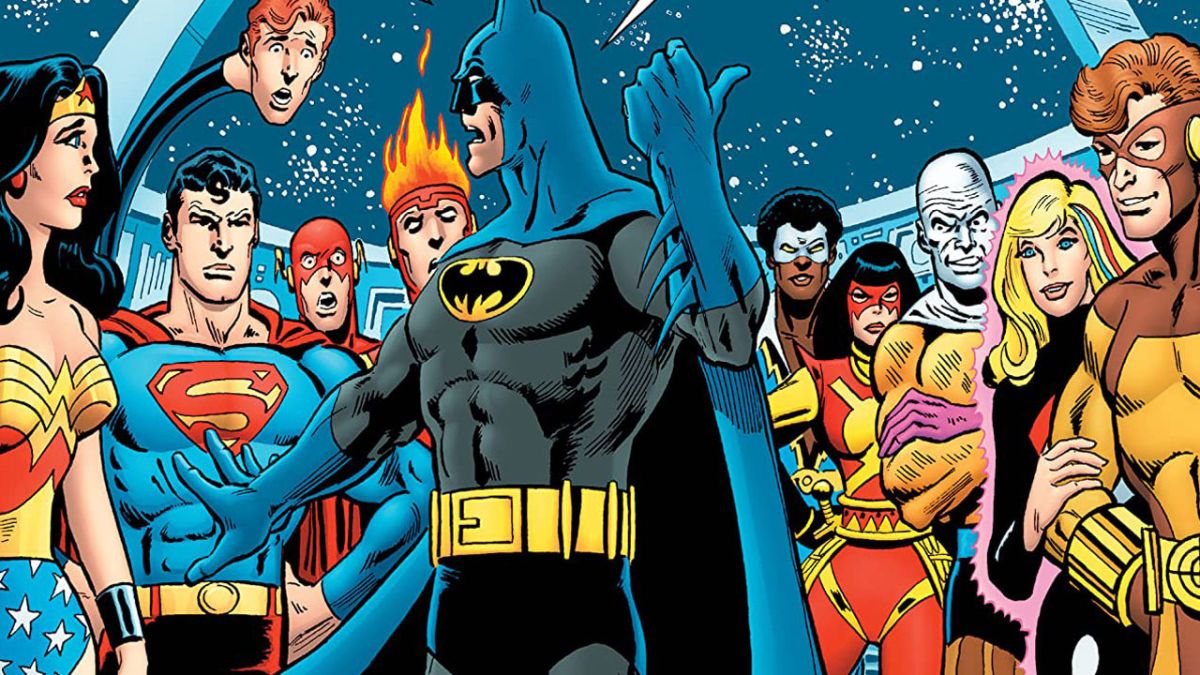 This certainly feels like an ending. I imagine in two years DC is out of the monthly periodical business (which seemed to be dying anyway back in early 2020), and has moved on to those young adult graphic novels that look sharp and more modern. Makes sense from a business stand point for them, but the comic store impact could be brutal.

There is so much that is truly awful about the direct market, but it is how people make a living and feed their famalies.

Next let’s see what Marvel does by year end. Do they keep up with those over priced variants and flooding the market? Or do they get out as well?

This is good news. Monopolies are frowned upon for a reason, and rightly so.

I’m familiar with assorted ins and outs of Diamond via employees I’ve come to know from various comic stores, be they physical and/or online mail order outlets. They all wanted to like Diamond, but found that their practices made that incredibly hard.

They very strongly wished the leading publishers would seek out additional distributors, so as to make Diamond snap to attention and improve where they needed to, but to also give retailers additional options so as to make their businesses run smoother.

There have been additional distributors in the direct market side of the comic industry before, and that was often when business was booming. Maybe this is a sign that a new era of salad days is coming for the direct market? One can hope.

Speaking as a consumer, I was always annoyed when something a comic store ordered for me took what felt like forever for Diamond to ship to said store. I hope DC’s new partners are able to get special order product to retail much better than Diamond generally did.

As for retailers allegedly cutting ties with DC over this…that’s rather petty and silly. With comic stores having to compete against digital, Amazon, bookstores and their internet platform(s), online mail order outlets and the like, the last thing that any comic store run by levelheaded adults who understand how to run a functional business should do is turn away one of their major revenue streams.

The only thing that will accomplish is to push consumers of that brand into their competitor’s environs. Some stores may not like having to deal with outlets outside of Diamond, but is it really something that they feel is worth losing sales (and not just from DC product, but sales of non-DC wares that are also bought by DC fans) over? In a time when sales and repeat customers are more critical than ever, it shouldn’t be.

The loudest are people throwing tantrums, being toxic, threatening boycotts over this, etc.

The quieter ones are those who already switched over and say shipping is better, the books arrive in better condition, and its easy to set up.

I know it’s an awkward time, but Diamond obviously got on DC’s last nerve.

I just wish BC and Newsarama would give voice to those who have good dealings with the new distributors.

I never thought retailers would defend a monopoly which constantly did them wrong…but look at the reactions…oy.

I am just worried about my LCS dropping DC. They have expressed that they are apprehensive about this and are looking into their options. I do not want to go to another store. If my LCS does drop DC, I guess I will need to look into mail order for all things DC. I just really hope they will start using one of the new distributors.

I don’t really see this as the end of the comic distributor monopoly. If DC hadn’t just cut ties with Diamond, then the industry could’ve been heading toward an end to the monopoly because a retailer could theoretically choose to order DC comics from Diamond or one of the new DC distributors each month. This could have led to more publishers making their comics available to non-Diamond distributors and LCS having a legitimate choice between multiple distributors each month, i.e., no more monopoly.

But DC is exclusively soliciting new product through their new distributors after this month, so retailers don’t have a choice.

Several months ago, if a LCS wanted comics, they HAD to order through Diamond. A monopoly with no competition.

Originally, I liked the idea of DC being available through multiple distributor streams. Other publishers could follow suit, Diamond’s monopoly could honestly be over, and the industry would be healthier for it. But DC cutting ties with Diamond completely will not make the industry healthier at all. It will, however, make the job of comic shop owner much more difficult and costly (especially considering the shipping costs and bulk discounts).

Right now, the comic industry is slowly limping back from the devastating effects of the pandemic; this is one of the absolute worst moments for DC to be pulling a seismic shift like this.

Marvel almost sunk the comics industry in the '90s with their own distributor fiasco (leaving Diamond with an unintended monopoly). I guess it’s DC’s turn now.

I think retailers are worried about paying shipping costs to two distributors is going to cut too much into their bottom line at a time when when their not too profitable business is seeing even less profit than normal.

And the new distributors are also their competitors, too. That would weird me out, myself.

I don’t see any retailer dropping DC altogether, though. That seems like emotional statements just from gut reactions. Too much of the products they sell are from DC for it to be smart business to just drop them. Those would have to be some truly large new shipping costs to wipe out ALL profit from DC.

@Corey19, I think you make some very good points, but aren’t there now two new distributors they can choose from rather than just the one they had to use before?

After researching more on this issue and reading and hearing opinions of retailers, I’m not sure how I feel about this.

The main advantage of having Diamond as the only game in town was that it gave retailers one location to obtain all their goods. This results in a pretty nice discount.

Time will tell to see how stores adjust to this.

The impression I got from Bleeding Cool was that it may be cheaper if you’re in one coast to order one way, and vice versa. So maybe not much of a choice there, but what about the people in the middle?

And I could be wrong, too, of course.

This is good news for my LCS. They had stopped selling new comics, and were focusing on toys, collectibles, and old comics; they stopped because of Diamond’s attitude and lack of professionalism. Now, they’re selling new DC books again. So, I’m happy.

Yeah I know a lot of indie authors who use Amazon because they are the lesser of pains but they are still a pain. From my understanding there really isn’t a great distribution center. For a corporation like DC, Amazon would charge them a lot and take a portion each time (which as an indie I am sure you know all of this

).
I know Nook and Kobo aren’t perfect either. Amazon’s best selling point, in my opinion for indies, is the fact that they have a larger reach. I read a lot of indie and know a lot of indie authors so I hear the stories all the time about self publishing!

They always take a portion yes. On a paperback retailing for $12.99 I make $3.30. Amazon takes the rest for the cost of printing and distribution.