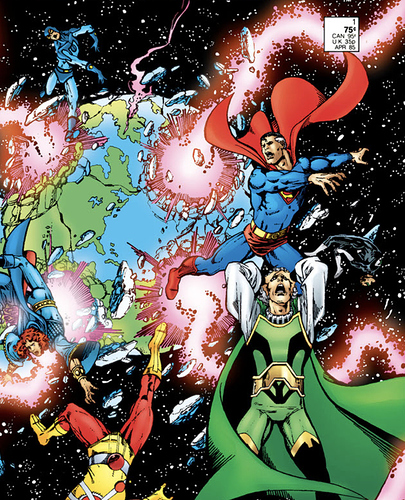 So much so, that we’re going to be covering each issue of Crisis on Infinite Earths on DC Daily starting this Friday, 11/15. Every day we’ll tackle the next issue, leading us all the way to the big premiere on Sunday, December 8th on the CW with Supergirl!

We’d love to for you to go on this journey with us, so here’s how you can get involved:
Read along with us starting with Crisis on Infinite Earths #1 and use the comments section below to give us your hottest takes! Who knows, your comment might just make the show!

Feel free to post comments on all the issues from #4 and on! (Be sure to mention which issue you’re on).

You can find further discussion questions in the DCU Book Club coverage of this same event, which follows a very similar (if not 100% identical) reading schedule:

- just in time for the hotly

I started reading comics in 1985, so Crisis is one of the first series I read. It was my introduction to the vast volume of characters that exist in DC Universe and, despite all the lore that obviously existed, this was a really good jumping on point for young Ralphie. The way they were able to use all these characters but still have the story be accessible is nothing short of amazing. Kudos to Wolfman & Perez!

this is truly a captivating convergence of Crisis content … can’t wait!

Speaking of Crisis, for anyone into the 100 Page Giant books, there’s going to be a Crisis on Infinite Earths 100 Page Giant title. No idea what content is in each book (two issues have been solicited so far), but there will be NEW content in them, along with some reprint fare too. Just a friendly FYI.

That’s great! As you get through each issue, shoot us a comment on what your thoughts are!

Just finished issue #2. I’m anticipating that the crossover will do some adaptation of Lyla betraying the Monitor, but I hope it’s at least done in a different way than the comic. That twist would certainly be surprising for viewers not familiar w/ the original story, but I also hope they’d be able to keep something like that fresh for those of us who know it’s coming

I neglected to mention how the majority of the other book clubs are participating with the Crisis tie-in stories. Forgive my neglect!

Anyway, in regards to issue 2, I appreciate how it opens by playing with the chronological bookends of DC’s fictional universe. It anticipates the Wolfman/Perez companion piece to COIE, History of the DC Universe, where they lay out the entire chronology of the post-Crisis cosmos.

That said, I’ve always preferred the “present day” DC stories over the ones set in the distant past or future, so my interest in the issue increased drastically once the Harlequin of Hate showed up to express his love of silent comedies and murder. And you know that the Joker is evil when he talks about colorizing those old films!

Batman bursts in and references one of the various films entitled The Prisoner (the Karloff one, the Lugosi one, or the Guinness one?) and throws some unjustified shade at the Patrick McGoohan series of the same name. Boo, Bruce! Credit, though, for solving the Joker’s Pilgrim-based riddle (and just in time for Thanksgiving).

Then comes the gut-punch: Barry Allen disintegrates in front of the Caped Crusader. Before we can recover from the shock of seeing the pioneer of the Silver Age seemingly die before us, we get our vocab word of the day: Psimon calls Geo-Force a poltroon (etymologically related to poultry, hence a chicken).

And if the readers are getting overwhelmed by all these obscure DC characters hanging out together in one scene, don’t worry: it seems to be giving the Monitor a headache, too:

For anyone losing track of all the men of steel, Wolfman helpfully draws a distinction between the Superman of the current continuity (seen with Batman on Earth-1 in the present) and the original Golden Age Superman at Earth’s end with Kamandi.

Meanwhile, Psycho-Pirate messes with Pariah (the poor guy shackled with the Silver Surfer gig in this series) and gets the Harlan Ellison treatment from the Anti-Monitor. Unfortunately, he will find the Crisis as unforgettable as the readers do!

Tragic and brief as it was, I loved seeing Superman and Starfire connect over the similarities of their pasts in issue #3. I get the sense that had Clark not intervened, Kory would’ve just kept shooting at the anti-matter wall until it consumed her too. It really effectively showed the sense of helplessness that I’m sure so many other characters were feeling at that moment, and the need to come together to find a more creative solution 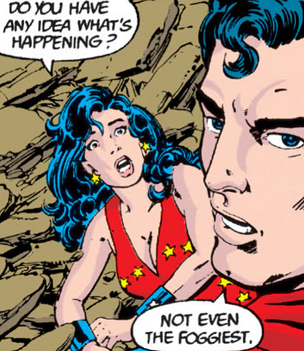 “It’s even more confusing than your origin story, Donna.”

Anyway, issue 3 gives us the Outsiders and the Teen Titans teaming up, and we get both Sgt. Rock and Blue Beetle in the same scene–fighting Nazis, no less. Plus more Western characters than the Country Music Awards. Doesn’t get any better than that.

“It’s almost as eerie as your headband, Kara.”

John Constantine makes his first appearance outside of Alan Moore’s Swamp Thing, and his characterization feels so off that it makes Keanu Reeves look like Gordon Sumner’s long-lost twin.

We also get a new Doctor Light, who subverts all expectations by being a hero instead of another villain. But before the readers can take it all in, the Monitor kicks the bucket, and we end on a wonderfully nihilistic note. But fret not: there are more issues to go.

Issue 5 begins with just a voice, victorious, but not really. Then we move to a satellite with a dead Monitor. Pariah, as always, in tears. Harbinger has reverted to her human form and vaguely recalls killing her master, as if she merely dreamed it. Then they are pulled from their sorrow by, impossibly, the Master’s voice.

This opening sequence really is masterful storytelling, and the way it builds in intensity and confusion as the issue progresses is really a thing of beauty. The whole issue, even when you think you have a grasp of what’s going on, leaves you slightly off-balance.

I can’t imagine what the creative process for Wolfman and Perez was like, because the ideas presented in these books are so far afield from anything that had been done before. The scale of it all rises and falls exactly as it needs to blending the personal with the cosmic with such precision that Ray Palmer couldn’t get small enough to see room for improvement.

DC Daily gets thanksgiving break, but it’s back to work on Black Friday.

I’m sure it’s already pretty-taped, but I’m really looking forward to their dissection of #7 and #8 given the deaths that occur. I wonder if they will see it as I did, rocking DC to its core.

There are three things I want from this crossover:

I consider 1 to be indispensable, the others very strong nice to haves.
And so far as #7 goes, I remember when D released it to USA Today as a way of saying that they were really serious about shaking things up. That’s why it says “This is it!” in the banner, and probably why it’s one of only two covers I can think of that the CWverse has specifically recreated on the shows.