DC History Club: Crisis on Infinite Earths, The History of the Greatest Event in Comic's History

Here is a relevant article on both.Qualiry and Fawcett characters

One interesting point was that Len Wein had established the Quality characters on Earth X. Roy Thomas had them move to Earth X at the end of the story to kerp the continuity. 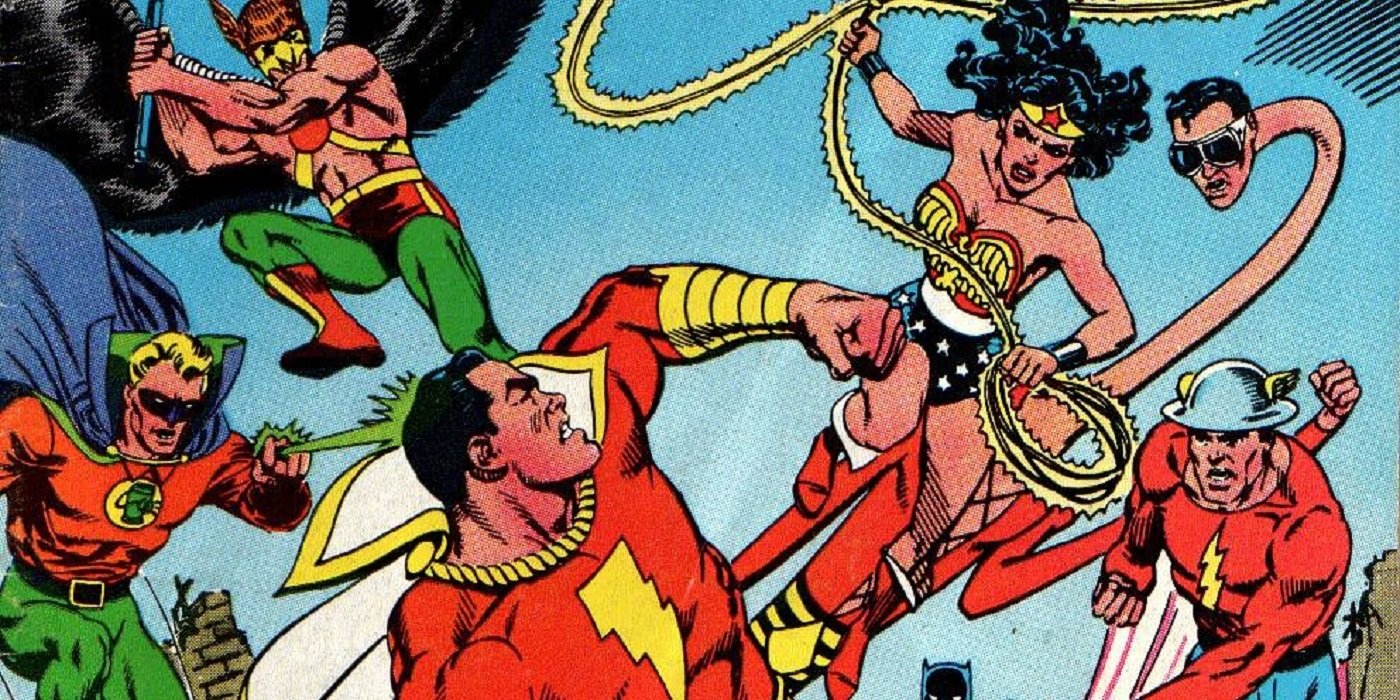 Comic Legends: Was the Power of Shazam Too Much for All Star Squadron?

In the latest Comic Book Legends Revealed, find out the real reason why Shazam couldn't become a member of the All-Star Squadron.

Acquired Taste Book Club Week 5! [Acquired%20Taste%20W5%20Image] 2019-12-03T02:00:00Z (UTC) → 2019-12-06T19:59:00Z (UTC) Welcome to a belated edition of the Acquired Taste Book Club! We’re circling back around to Quality Comics today, for a look at where the bulk of Quality’s characters ended up. In this case we’ll be taking a dive into the history of Earth-X, the adopted home of Uncle Sam and the Freedom Fighters. While Plastic Man joined DC’s main heroes on Earth-1 and Blackhawk Squadron h…

So for clarity: DC acquired the Quality characters in the '50s, the Fawcett characters (mainly the Marvels) in the '70s, and the Charlton characters in ‘83. However, as far as I can tell, the Charlton characters didn’t directly cross over with any DC book until the Crisis, whereas the other two companies’ stables had appeared in multiverse-related stories previously. So if by “introduced to DC” you meant appearing in a book alongside DC characters, then the Quality and Fawcett characters should be struck from the list, but if you mean being part of the main DC universe, then this event is where they were integrated. I assumed it was the latter, but it sounds like you meant the former.

Here is a brief history of Charlton

Toward the end Giordano Ditko and O’Neil are memtioned.

Honestly it depends on how the question will be phrased, and I’d like to hear opinions on it before I write it up probably on Friday. Is it “impact on DC Comics by characters first introduced in COIE” or “characters brought into the mainstream DC universe”. I could go either way just hadn’t thought of the second before, which does bring in more choices.

While I’d agree COIE has its holes and odd results, there is one important thing to remember. Something of this scope had never been done before.

I read it in real-time and it was astonishing. Certainly I was pissed that Earth-3 got destroyed, I loved the Crime Syndicate. But it was also what made it the standard. The stakes were so high. I often think Barry’s death was more impactful because he just needed what had to be done. He didn’t know it would kill him. Supergirl on the other hand was operating on pure emotion and adrenaline. She had sort of lost her zen, as it were. She was so emotionally tied to Clark that all that mattered was that he was saved.

The impact of COIE did have long term implications. They do need to limit a crisis level event to no more than once every 10 years (minimum) once every 15-20 would work better. Make it truly high stakes and really deal with the aftermath for years.

But, I will say COIE is (and probably will always be) the event everything, by either main publisher, will/should be measured against.

I’ve followed a lot of events over the years from both DC & Marvel. None comes within light years of COIE. Not to mention it’s scale.

If you haven’t checked out the most recent “ask…the question” article, there were 518 named characters to appear in Crisis and Hal Jordan wasn’t one of them.

518 characters, that’s insanity. That’s spectacle. That’s granger. That’s COIE. With 518 characters in those 12 issues I can live with some plot holes and weird backbending required. That sheer expanse of characters, and flying blind as it has never been done before, nothing has dared approach COIE. It is and will forever be a classic and even as universes and characters come and go via various “events”. It will always be timeless.

@DeSade-acolyte that’s a great note to the question of what COIE could have done better, because it did so much right in a way that’s never been equaled. As one of those who read it when it came out, I remembered being stunned at the deaths of main-stay heroes and and the sheer number of deep-dive DC characters involved. Thanks to Perez’s mania to include as many characters as he could, you can pick a random panel and find C-listers who feel like they’re intimately involved in the story. 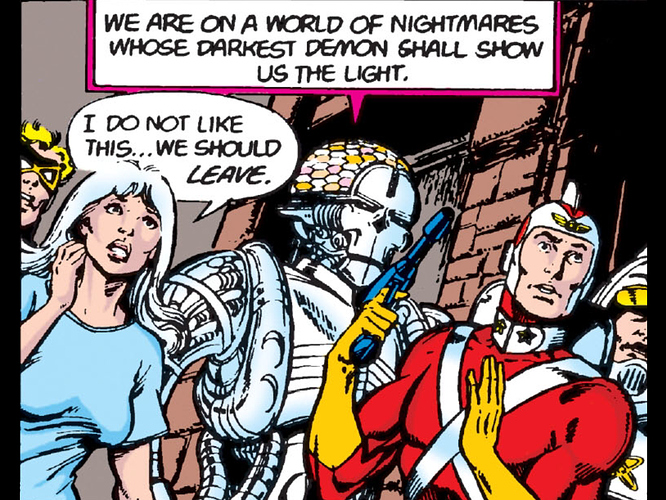 image2048×1536 1.53 MB
The Supergirl-Flash comparison in the manner of their sacrifice is the difference between the action in the heat of battle versus going up over the top when the whistle blows.
1 Like
msgtv December 20, 2019, 9:10pm #48

https://www.dcuniverse.com/news/ask-question-how-many-characters-are-crisis-infinite-earths/
If you haven’t seen the article @DeSade-acolyte referenced in which he asks @HubCityQuestion how many characters appear in COIE, it’s a must read. And just for fun, see how many characters in the image used you can name.

@msgtv
And, just as in the pic you posted, the combinations in a single panel are things you’d never see. Just Adam Strange, brainiac & geoforce in the same panel, (I can’t recall the other two) that is a combo you’d never see outside of Crisis, let alone basically working together.

I think we are lucky it combined Wolfman & Perez. Marv could think so out of the box as a writer and George was…well…George. I’ve yet to see another artist that could fit 9 characters into a 2.5 x 3.5 panel, and each be totally recognizable and all having unique expressions.

And (if memory serves as I lost my original copies years ago) the original COIE was still printed on old school comic book paper, not Baxter stock. So the lines and colors had to be “just so” because you had to take into account that the old school paper could “bleed” certain colors if you weren’t careful. It could have been done on Baxter paper, as Camelot 3000 had already used that paper. But, I don’t recall COIE being as stiff as say TDKR, which did use Baxter paper.

Still have COIE, or rather my daughter does, and it’s comic book paper. This is a convergence of talent and opportunity and timing that rarely comes along in any medium that hits just the right chord and becomes defining, like All in the Family.

It’s an aesthetic I miss. I read so many comics growing up and the were all on heavy newsprint/comic book paper. The print process nearly demanded that every color change has to be outlined in black, not unlike most tattoos to keep the color contained. Look at the white belts across the red chest of Adam Strange. It isn’t white on red. There is a black line that separates the two colors. Even the red caption box at the top of the panel has a black boarder.

With today’s printing and print stock used, that doesn’t have to be the case. Whenever I see something drawn that doesn’t follow the “black line code”, I just don’t find it as aesthetically pleasing.

I’d love to see a publisher do a couple of throw back issues a year, that were still printed using old school process. It would really take some artists/colorists by surprise on the boundaries they would need to be constrained by.

I definitely vote for some throwback comics. If it’s cheaper, I’d like them to think about printing a whole bunch on newsprint. At $4 per issue, it gets difficult ro justify buying a bunch of comics.

The only problem is they’d probably be more expensive, as the printing presses that can handle that weaker type of stock have most likely been replaced, so they’d have to farm it out to a printshop that does have the ability to do old school printing and they probably charge a premium for it.