Or, you could do a @tuxnut notes post here, just edit it and paste notes in when you want to update it. Other than that I’m not sure

That issue is not on Comixology either at least as single issue.

Here’s a fun interesting fact you guys might know, some episodes of Batman the animated series were based on the comic, Ra’s Al Ghoul first comic appearance was made into a two part episodes ‘The Demon’s Quest’ and was written by Dennis O’Neil himself! How cool is that?!

Which means need to watch that before next week now 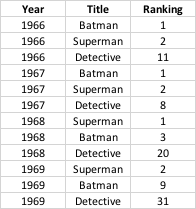 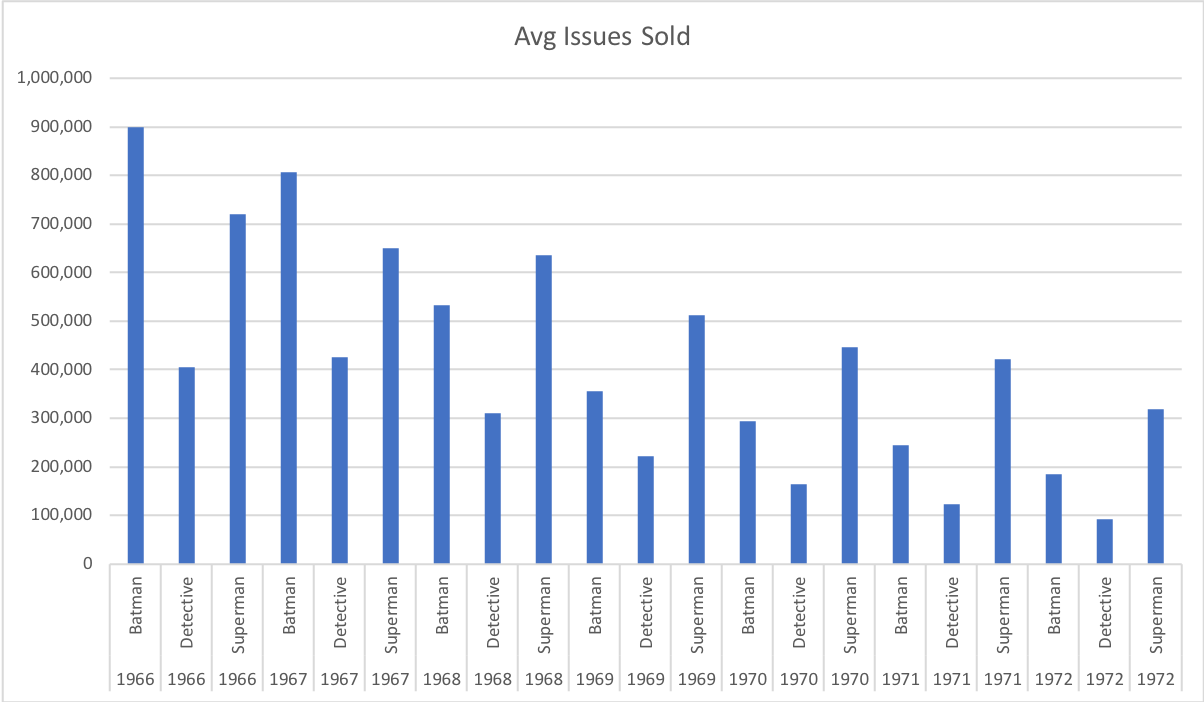 Some Batman and Detective Sales data with Superman as a control. 1970-72 are estimates for Detective based a 1.8 multiplier for Batman the average over the previous four years

From Comichron link above. They have complete numbers from the 60s and numbers on selected titles beyond that

I compiled them from multiple pages

Nice add to the wiki by @TurokSonOfStone1950

I added another article on the Bronze Age, where how characters were presented changed dramatically, to the wiki.

Below are the important dates for that time period. Notice that Denny is crucial for many of them.

Denny’s background was as a reporter, sensitive to social issues and trained to meet deadlines. He did not come from fandom. Also he had a wife and baby and thus could not reject any work.

1968 is when Denny came to DC
He could not helped earlier.
Old Camp approach was still in effect that year as Batman TV craze just ending.

At some point, Julie must have realized old approach not working.

You are right about newstand sales.

It was not also that the DC stories were silly, in some ways they were always silly at least the Superman and Batman franchises, in contrast to Marvel

I gave up on Marvel and DC around the same time in 1967 or 1968 because I could not find the comics anymore. With Marvel who had continuing stories it made it impossible to continue reading them

I know I was still reading comics in 1966 because I remember Black Panther debut but I got Conan, GL/GA, Skrull Kree War and Wein Swamp Thing as back not current issues.

I remember getting JLA when Wonder Woman was doing her 12 trials to come back to the team which was around 1973. I started going to Forbidden Planet on 17th street snd other stores when I moved to Manhattan in 1979 and that is when I could get Comic Books easily again. I remrmber going to a tiny store at 86th street before that to get comics. Maybe also near 34th street. I dont know how I found these shops

So from 73 to 79 it was hard to be a fan. I dont remember buying many Batman comics duting that time but I had the Englehart run from.Detective 1979 as well as All Star in 1976 and Spectre in Adventure in 1974.

Englehart not ONeil may have been my Batman

There’s two threads that next time I need to make more distinct. This is the research thread, the discussion thread is pinned near the top of community events. Still trying to figure out best way to do stuff

The initial thought was to have two different threads. The “here’s stuff to research and read, please post any other research material you find” and at mid-month a discussion thread. The idea was to give everyone a chance to read about the topic before opening discussions. Now, think that’s overly complicated. Think next try will be one thread, then a “vote and defend” going up at mid-month

Crisis is next but plan votes after that. Again, I’ve got to write these up better. Never intended that people would read the entire run, but sample it and read some articles or interviews. And, historic runs are just one option for topics. Could be the Fleischer cartoons, or Julie Schwarz, or politics in early Superman, or Superman the movie. Anyway, will do a poll with options in December for the January topic.

The book club is doing Crisis. I’ve gathered some interviews and articles and one thesis that all look at its creation impact, etc that I’ll post links to and the History Club can discuss it from that perspective

Right now watching ASU trying to knock off the Ducks

Don’t need to reread then, still can pitch in on your thoughts on its importance, impact, etc

In light of Denny O’Neil’s passing, thought I would give this discussion a bump for those who haven’t seen it.