Wonder Full Fact Wonder Woman was aired sporadically on ABC in season 1 over a 14 month period.

@TurokSonOfStone1950 nice find on the stunt woman’s film. That whole area was not something I thought of before we started on this. Very cool.

UPDATE It is free on Tubi

There are several cameos of Lynda Carter but limited Wonder Woman scenes.

The stunt double of Lynda Carter, Jeannie, comes from a family of stunt people including her father and daughter.

We see scenes of Zoe Bell as Xena.

Xena ends and Zoe is unemployed

The rest is almost more like a movie than a documentary.

Jeannie takes he under her wings and helps trains her and they both attend events where Zoe meets people in the stunt business.

At one training location, Zoe is noticed by someone working for Quentin Tortino who is starting up the movie Kill Bill

The rest you should watch.for yourself

Zoe Bell is sensational. You see how many skills a stuntwoman needs almost like a real.Wonder Woman. Quenton later has her star in Death Proof where three women are threatened throughout the film by a pycho He picked the wrong girls.

At 64 Jeannie still looks for work and it is obvious she would be a highly paid stunt coordinator if she was a man.

Luckily she knows all of the major stunt coordinators because she worked with them for five decades and is on the board of the union.

At the end at 64 she works on.the Fast and the Furious from which came Gal Gidot.

From our friend @moro on Wonder Woman collectibles, including those associated with Lynda Carter

There’s actually a really good source for Wonder Woman collectibles. Almost like an online museum. It’s not exclusively related to the show, but has many of the merchandise associated with it with great screenshots. 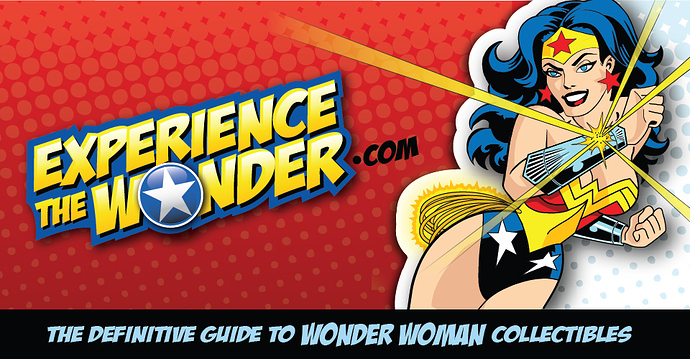 And also from our good compadre @moro

Click on “memorabilia” on the left. They have a poster section there

One thing I would like to highlight about the television Wonder Woman is that she can mimic any voice. And I believe she did it after hearing the voice(s) in question. She does it one or two more times during the first season, but AFAIK no other iteration has that ability.

In the Megan Kelly intervirw she says

It is the amount of money she would be paid that is keeping her from being n Wonder Woman 84.

That may be reason she was not in Crisis in Infinite Earths. Her refusal to appear probably increased her chances of getting more money for the movie.

Doubtful it was Warner Brothers who objected since they asked that Esra Miller appear. It would have been great publicity for the movie if Lynda appeared as maybe Queen Hippolyta on a non DCEU Earth

These are six videos probably too inconsequential to be up top

First is if
You want to know timeline of her two husbands and who they are. In one interview up top she said she was so unhappy in her marriage that she didn’t want to leave the set.

On The Talk you see how women in the audience as well as the cast react to her.

On her harassment and alcoholism 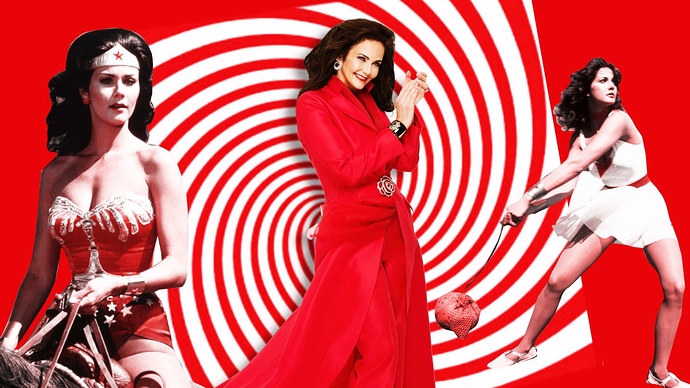 ‘Wonder Woman’ Lynda Carter: This Is My #MeToo Story

In an exclusive, candid interview, Lynda Carter reveals the sexual harassment she endured in her career, including on the ‘Wonder Woman’ set—and how she survived alcohol addiction.

If you want to her sing. There are many such videos on YouTube including with her daughter.

It is amazing how different she looks in each video

Nowadays she looks astounding for her age and truthfully at any age.

And, I have not seen her use her mimic power in seasons 2 or 3 and I’m pretty sure she doesn’t.

So much to look at here. Just starting, checked the links to merchandise @moro provided. These Mego dolls are something else. The Wonder Woman dolls start used for about $50 online up to over $400. I see some of the boxes have Lynda’s picture, other’s don’t. And, you can change Wondy into Yeoman Prince. 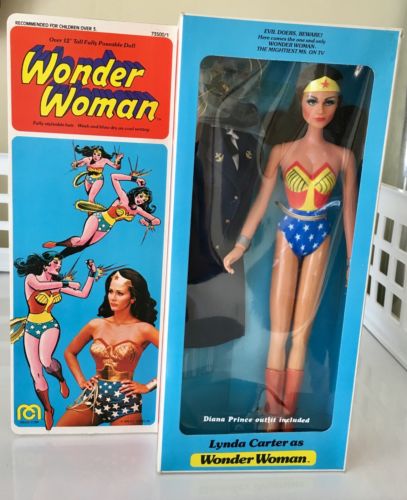 Here’s a pic of the entire lineup. Steve looks kinda off. Interesting to me is that Mego saw more value in providing for their African-American customer base than the show did. 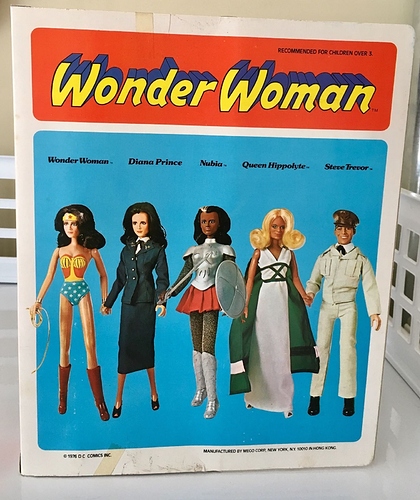 Greek travelers and writers from
the ancient world mythologized the
Amazons, but these legendary female
warriors were very real. They hailed
from the ferocious nomadic Scythian
tribes that controlled a huge swath of
Central Asia and kept the great powers of Greece, Persia, and China at bay.

With the help of recent archaeological
findings, uncover the lives of these
Amazons through the tale of a
Scythian who grows up to become a
horse warrior and leader of her tribe in
a defining battle against the Persians
in 6th century BC.

It tells the story of a young girl whose tribe was destroyed until she is the leader of the tribe who had adopted her, saving her from cerain death.as a sole survivor.

The end is a battle of Amazons like Women (and Men) on horseback riding fiercely against the maaive follies of arrows from the Long bows of the Persian.Empire.

As Burt Ward might say, “Holy 300.” as the sky goes dark from the arrows hitting their targets

As for people having multiple partners William Moulton Marston did not invent the practice.

Episode 2 is Gladiators Watched it. Think of Diana vs Conan as gladiators in the mini series but all females

I am now watching

The Agooji of West Africa were the
terrifying all-female fighting force
of the kingdom of Dahomey in the
19th century. Up to 6,000 strong
the Agooji battled to protect one
of the continent’s last independent
kingdoms, fighting as elite regiments
against colonial male armies in the
Franco-Dahomean Wars.

Witness the fascinating history of these women warriors through the story of Sukeoun, a young girl who is taken as a tribute to the king, rises to become an Agooji officer, and valiantly fights to defend her kingdom.

A few pieces of Lynda Carter merch (photos come from eBay and Google): 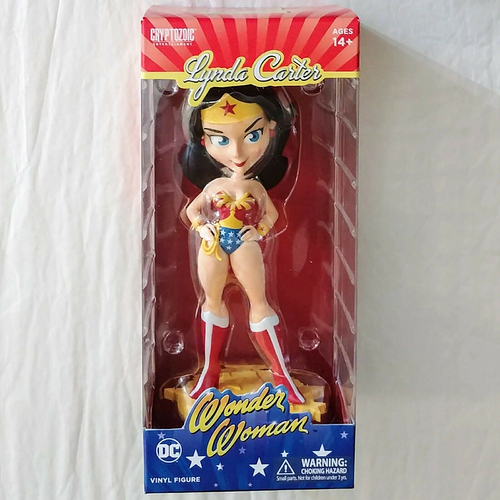 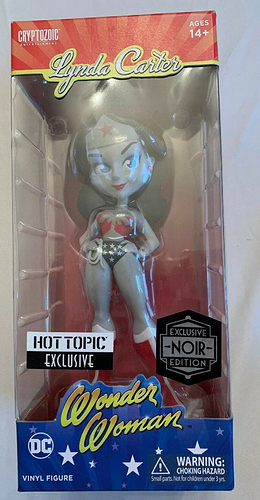 A caped variant of the original figure/statue: 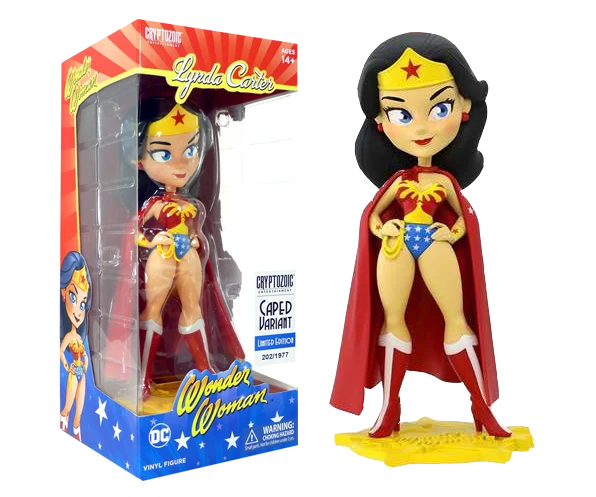 Below is arguably the best Lynda Carter Wonder Woman figure ever made. It hails from the Signature Collection portion of the DC Multiverse line, by Mattel. 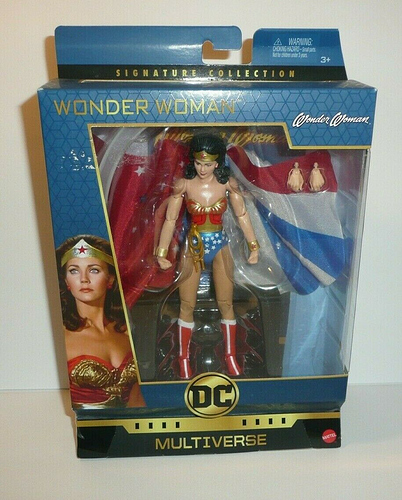 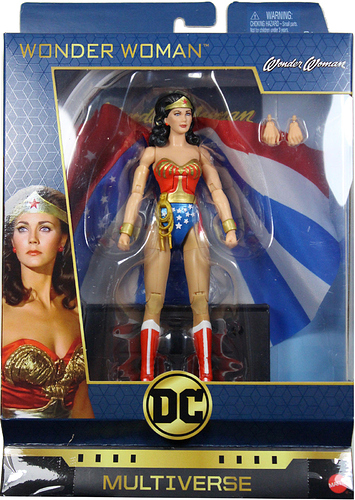 Promotional out of package picture: 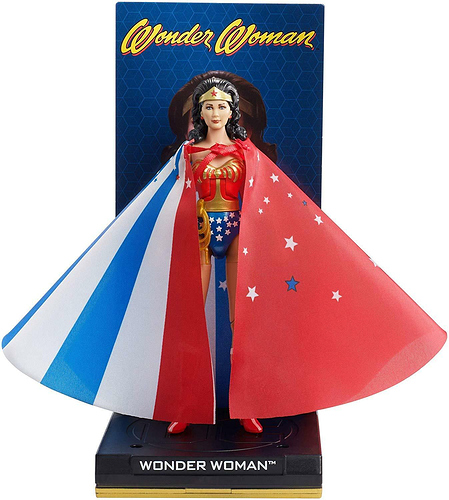 Tweeterhead has made a few maquettes that featured Ms. Carter’s likeness: 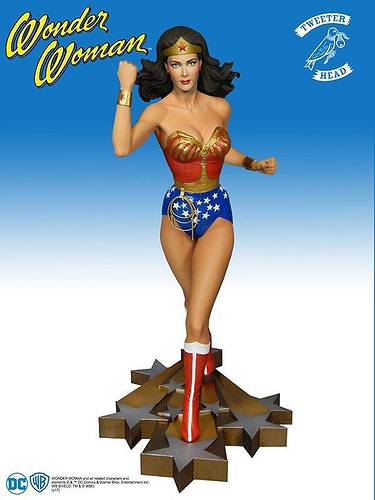 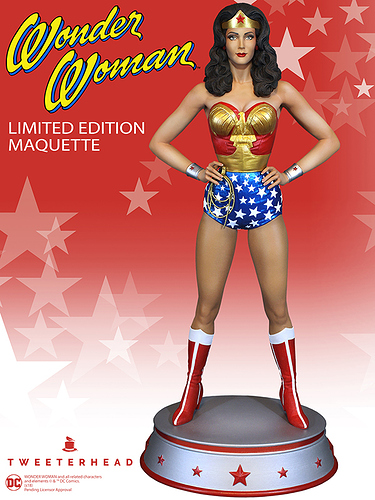 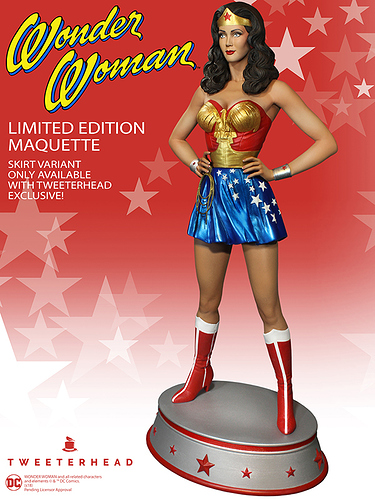 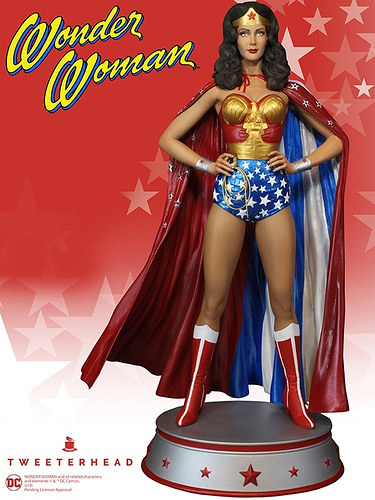 And that’s the impact of her playing a character for three years in the 1970s. Should be putting up a couple of polls tonight about her iconicness versus some others. Thanks @Vroom

Another question, beyond just our favorite Amazon. If the Wonder Woman figure is done in Lynda’s image, does she get a cut?

Who was more significant?

In many ways it depends on.how old you are and whether you are male or female.

I am not sure if the Adventures of Superman was ever an evening show. If it was nobody here is old enough to remember it. That affects influence. I saw it in the afternoon and I am 69. It was a show for kids.

The other two were evening shows for a wide range of audiences.

Adam West dominated as a version of Batman. So much that the Silver Age might be separated into.two parts Before the TV show and after.

Adam West.WAS Batman and he did this version well. But The show caused the comics to reflect it. And I was 16 and the comics were unreadable. The writers could not write the way the show was but they tried and failed miserably. So i left comics for 7 years.

Batman TV show was such that the Batman movie of 89 was difficult to.sell. Batman was Camp and Camp didn’t sell.

Even ten years later you can see the influence of the Batman TV show on.the Wondet Woman show. It had elements of tomgue in check at best and parody at worst. Like Cloris Leachman and the harp.

Lynda Carter almost caused the show to rise above that but couldn’t. She was true to the character and never made fun of it. But the show did.

If I was a young female watching the show that would be enough. At last a female character that was brave honest true powerful and many other things. But I am male

Who was more true to the original

The Batman TV show ruined the character and established a foolish version.as the version for decades.

Superman.was limited by the special effects of the day The flying was unconvincing and only the bullets bouncing off his chest worked… Superman in.the last episode of Justice League Unlimited said the world was made of paper.mache. that was clearly evident on the walls and props on this show.

George Reeve as Clark Kent was much better than the one in the Comics. He was warm and masculine, winking at the audience. Not like the comics

Wonder Woman was a model for everybody. She was not knowlegable about Man’s World. But again she was the most brave honest truthful empathetic strongest and smartest person in the room as either Diana Prince or Wonder Woman

I have this one!

I’m not a fan of the Pop giant heads, but this is beyond adorable.

So, on the poll questions. For which lead actor had the most significant impact on our perception today, I went with Lynda Carter’s Wonder Woman. It’s really a two person race between her and Adam West. But, while West undoubtedly had the bigger impact on the broader culture at the time, his impact fades until it is completely replaced in the 80s/90s with the Dark Knight of Miller/Nolan. The camp has decamped. Lynda on the other hand gave us a happy warrior, somewhat bemused by how ‘man’s world’ operates. Her’s is a smiling, compassionate butt kicking version of Wonder Woman. Sound like someone else? You can draw a straight line between Lynda and Gal.
On which program most closely reflected the intent of the characters creators, I went with Wonder Woman again, but I do think there’s a good argument to be made for Reeve’s Adventures of Superman. No he’s not the social warrior of Action #1, but that version of Superman lasts less than two years. By mid-1941 Superman had stopped trashing used car lots full of lemons, and concentrated on stopping organized criminals, bank robbers, etc, just like Adventures. Wonder Woman season 1 reflects the anti-Nazi Wonder Woman adventures, but never includes the more ‘fantasical’ elements of Golden Age Wonder Woman. But, still they do such a good job that I voted that way.