That’s it. That is my hot take on a DC movie.

Batman & Robin is lambasted a bit more than it deserves.

I agree with the green lantern movie. It could’ve been a lot better, but I don’t see why it’s that much hated.

I enjoyed JL theatrical cut, and I’m a Snyder fan. I’m excited to see the Snyder Cut, but mustache stuff aside, I thought what we got was a pretty fun movie.

The Dark Knight Rises is the best DC movie ever

Every DCEU movie, including Suicide Squad and Justice League, is great in its own way, and the universe as a whole has gotten too much hate

The only good thing from Ben Affleck as Batman was his suit.

I’m a shambling pile of DC movie hot takes in the form of a man, so let’s get started!

Oh god, I did too much. Sorry about the wall of text, everyone!

It’s the swing dance revival scene, right? That’s what puts it over the top for you.

Superman vs the Elite is very divisive.

Suicide squad wasn’t that bad either. It still could’ve been better but it’s not as bad as a lot of people say

Naw! That was great.

I agree with some of your hot takes; disagree with others. But, hey, that’s what hot takes are about, right?

BTW, I have Mole Men on DVD from Cheezy Flicks. It’s a decent, not great, transfer but no captions or special features.

Grern Lantern including a longer version

I think I can make everyone mad with at least one honest opinion.
The Dark Knight Returns Part 2 is the best superhero movie ever made. It is even better than the last two issues of the comic.
Reign of the Supermen is the best Superman movie.
Justice League Gods and Monsters is a masterpiece
Superman Doomsday handled adapting so much source material and used the Eradicator nearly perfectly.
Batman Returns is the best live-action superhero movie.
Adam West’s Batman movie should be considered a must watch for Batman fans.
Flashpoint is an average movie.
Superman Doomsday is an average movie.
It should not have taken 4 movies of being the protagonist to be make DCAMU Damian a good character. It should have taken 1 at most.
Green Lantern First Flight is amazing.
Green Lantern Emerald Knights is a snooze fest.
The plot of Green Lantern should have been Alan Scott trying to connect with his son, but being too distracted in defeating Grundy. This would drive his son away to become the villain of the next movie, as he fails to grasp that even our greatest heroes are fallible.

I can’t get over it. Think it might just be the way the abs pop out.

Ex: I like the classic yellow Aquaman design but the abs stand out so much. Superman’s suit has the same thing with it.

I prefer something like Homelanders suit where there’s definition of the abs clearly there but it’s not so over the top. Maybe it comes down to lighting too. I did notice in Season 2 the abs distractedly stood out. IDK if it was always like that and lighting helps conceal it (in Season 1) that I didn’t notice or it’s a new suit for the show. 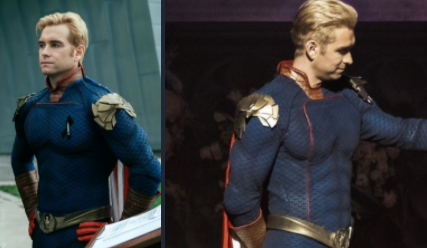 I thought Superman brainiac and doomsday were kind of boring.

1st Half of the Killing joke animated movie was the BIGGEST disappointment of all animated adaptations I’ve ever seen.

Batman The Killing Joke is actually a pretty good movie. I think it adapts the story fairly well and the Bruce with Barbara thing (while weird) is from a Batgirl comic that came before The Killing Joke. I think the film carries over the whole story pretty well and I love all the voice work.

thought it just took away from her. 2nd 1/2 Beautifully done well and true to its content.