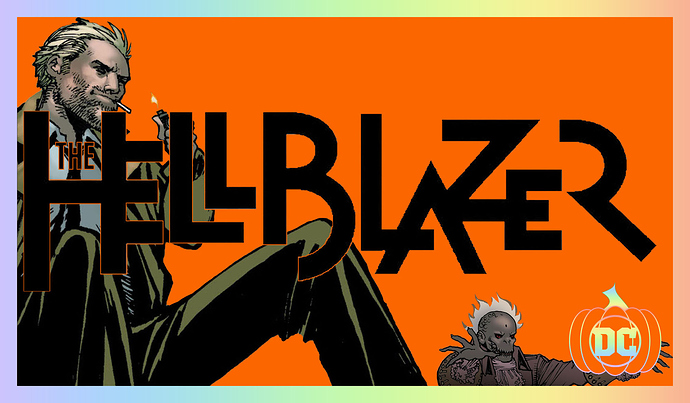 Halloween has made its way to the DC Universe and to @DCPrideBookClub as we embark on a journey through Rebirth’s The Hellblazer. We’ll be reading the first arc this month (The Poison Truth). Come join the spookiness!

Will you be dressing up for Halloween this year?

Oh, I’m so excited for this! I’ve been wanting to read more Constantine lately, so this has come at the perfect time!

I love the spooky season!

I have a bad habit of reading but forgetting to join the discussion, but I’m gonna try my best to participate this month!

Haha, spooky season is really fun. October is quite a busy month.

LOL, I wasn’t sure if to go with

they both rock, but i’m digging this colorful one

Yup, me too. It adds some fun flair to the club’s flair.

OMG! I lurve the color-changing pumpkins in our flairs!

Pumpkins are so cute

but rainbow pumpkins? The best

Oof, almost forgot all about this! I SHOULD be able to do one issue a week.

I think it works fairly well for what it’s meant to do. As with all the other Rebirth one-shots, the idea is that it gives new readers a thorough idea of what this character is about and where they’re going in the book. I like that it isn’t just a recap of all of Constantine’s past and exploits, just enough to establish that he is a right, proper bastard, and gives future readers a little hook into wanting to know more about his past. Most important, this issue actually does something pretty big in removing the curse that John had to keep him from London, something that he had been dealing with since his New 52 run.

I like how this book seems to so far really try to blend the character’s Vertigo roots, like re-establishing London as his homebase, bringing in Chaz, while also allowing his more superhero history matter, as we see in Shazam’s less than warm reaction to Constantine (it being a reference to John trying to con Billy to give him the power of Shazam during the Trinity War crossover).

Eh, not so much anymore, now that I’m all grown up and boring. Hell, even if the pandemic wasn’t making trick or treating next to impossible, I haven’t had kids show up at our door for years now. Mostly I just read/watch more spooky things.

I really did like this Rebirth one-shot a bit more than most of the other one-shots I’ve read. It didn’t feel so much like a recap, but just another part in Constantine’s story. I’m not the most versed in Hellblazer lore, which left me confused in some parts. Mostly, it was easy to follow and showcased the humor, and the cunning/trickery that John is really good at. It was fun.

removing the curse that John had 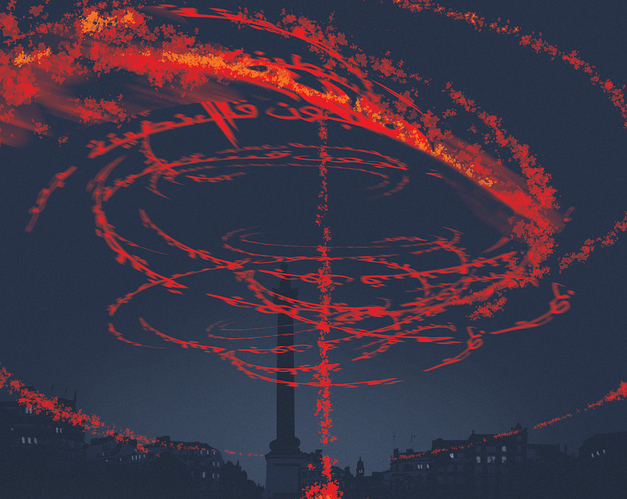 That entire scene felt like I was watching a movie. It was pretty epic.

Shazam during the Trinity War crossover

Ah, so that’s what that was about. I gotta read Trinity War now. That seems like a really good plot point to go visit and completely like what I’ve come to expect of John

That counts! Spookifying things is becoming more and more fun for me the older I get. I never was really into Halloween when I was younger (except for the candy).

I think its great, the art is a little wonky to me but I think it suits Constantine. I like that it shows you a bit of his history and throws in some humor cause well John is a cheeky bastard. And isnt that why we love em? 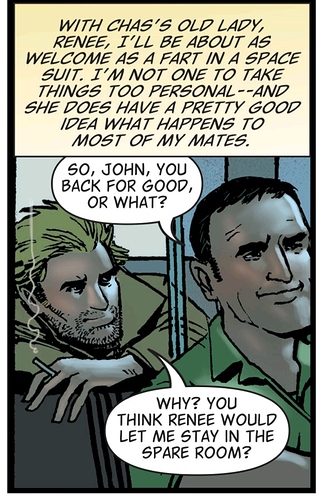 How are you feeling about Constantine?

I quite enjoy Constatine, ive read the previous hellblazers on the app and hes just a dick with a smidgen of a heart. Him and swamp thing for a start. And I liked this panel

Do you hav any traditions for Autumn/Halloween?

Pumpkins and pumpkin carving, lots of baking (banana and pumpkin bread, apple pie, scones), decorating the windows with diy cling that says Help Me, and a 1st this year Inktober

I agree with this! I was looking at the art a little side-eyed at first, but as I read on, it just fit. And I love that Wonder Woman too! It was a nice surprise seeing here there when I first read it.

Oh my gosh, your home must smell amazing with all of that baking going on! I definitely get more pies during this time of year. Inkotober with all of you talented folk on DC Universe

(P.S. I love your profile pic

(P.S. I love your profile pic

Thank you kindly some awesome person made it (looking at you

)and its just too cute.

I liked him here – like with John, he feels like a good mix of the character we had seen in the New 52, what with dealing with Abby being the Avatar of the Rot, but he also feels like the same character who went through all of Moore’s Saga of the Swamp Thing and all the other subsequent Vertigo series before he was allowed back into regular continuity. Definitely curious to see where Swampy goes in this series, especially in regards to Abby.

I’m not sure yet. I don’t know if she’s taken from a previous run of Hellblazer, or just a new character that we’ll find out more about as the story progresses.

Them bringing up John being used to surrogate a baby for Abby and Swampy was kind of a surprise. For anyone who doesn’t know, that’s an actual thing that happened in the comics. Tefe Holland, daughter of Abby Arcane, Alec Holland, and John kinda sorta, she actually leads the Swamp Thing book in a relaunch written by Brian K Vaughn.

Also, the scenes with the two seemingly immortal chaps and how one of them kinda sort of starts WWI and interesting. I’m curious to see where that story goes!