@nu52, on the past interactions with Two-Face, the stuff with him and Renee came from the No Man’s Land period of the Batman comics. If I remember right, they were stuck together in a collapsed building and Renee saved his life. It’s not something that really goes away after this story either – I believe he also shows up in the back-up features that Renee had during Kate’s starring time on Detective Comics, and he was also part of the Convergence: The Question mini-series.

So I just started from the first issue since I’ve always wanted to read this. Boy did I not expect it to be this great. But it is very tough in places. Those sections in issue #3 with the murder of Bonnie made me cry. Taking a break now but I’ll pick it back up soon and post some thoughts. Still haven’t gotten to our book club run yet…

“How do you like Gotham City when seen through the eyes of other characters and not Batman?”

I think it’s interesting and definitely only helps flesh out the world Batman resides in. What I like about the series in general is that it shows both why Batman is important to keeping Gotham safe, and the complications that arise from his existance. On one hand, Batman’s involvement made it so that no one died at the end of this story; on the other, even though that’s the case, Renee reminds Batman that he could do this all over again with Renee if he wanted to.

“What is your level of familiarity with Renee Montoya/The Gotham City Police Department (GCPD)?”

Pretty familiar, I guess. Of course my first introduction to her was in the Batman Animated Series, and then I read stuff like 52, some of Gotham Central, and pretty much everything from her tenure as The Question, as well as the few appearances she has made in the New 52/Rebirth era. Most recently I’ve been reading her past adventures in the likes of Knightfall and the Road to No Man’s Land, but what’s interesting is that even in those, there’s really nothing there that contradicts what Rucka does with the character here.

“What do you think about Renee’s emotional ride throughout these issues?”

It’s freaking rough, man. Like, outing yourself is a pretty big deal and can be a bit of an emotional rollercoaster, even when it ends well, but having it done without your knowledge or consent…doesn’t matter how proud you are, that can be humiliating and damaging. As bad as it sounds, what I like about the way it goes in this story is that while all this bad stuff happens to her, Renee doesn’t fold or wilter from it. She’s in a bad place, and she lashes out at people, some more deserving than others, but she still has her keen mind, and her strength of will. It’s going to be rough for Renee for a while (and from what I’ve read, it’s going to continue to be rough for her in other ways), but you see in this that she will be stronger now after all of this.

“What parts of the story stood out to you?”

One bit I picked up more on when I read this again was the scene between Renee and Maggie. I liked the dynamic of that scene and how neither of them are entirely right or wrong. Maggie does approach this problem with a little too cool and professional and comes off rather detached, but what she’s saying to Renee is still valid. Renee has a point in that with the different background and different environment, Renee being outed has different issues than Maggie’s, but Renee is basically trying to push away in what is potentially one of the few allies she might have left on the force.

Overall, this was a great selection, and I’m glad to read this again. What’s interesting is outside of a few other issues where the book kind of crosses over with other events, this was the last big chunk of Gotham Central I had read, so this gave me the push I needed to go on and finish this series. I’m very much looking forward to seeing how Renee continues her story moving forward in this series.

@Jay_Kay That’s good to know about the collapsed building. It does put some things into context for me. Thanks. I’ve never read No Man’s Land or the Detective Comics where Kate is the star. I’ll have to check that specific Convergence title at some point. I read a few Convergence books when they were coming out and the main Convergence book, but didn’t know there was one for the Question.

@Mae I didn’t expect the book to be this good either until fellow DC Universe users started to say how much they enjoyed it. I still wasn’t ready. I really liked Ed Brubaker’s style of storytelling. It does tackle some intense material. I can’t wait to hear (read) your thoughts on the rest of the arc and your thoughts on “Half a Life”.

@Jay_Kay “What I like about the series in general is that it shows both why Batman is important to keeping Gotham safe, and the complications that arise from his existance. On one hand, Batman’s involvement made it so that no one died at the end of this story; on the other, even though that’s the case, Renee reminds Batman that he could do this all over again with Renee if he wanted to.” Yes! That part right there was said almost in passing, but it was poignant and showcased the darned if you do and darned if you don’t aspect of Batman existing.

You’re so right. Coming out is a tough process enough when doing it on your own terms, but when that’s stolen from you, it’s so much worse. Renee really is strong of will and character. After this she deserves a lantern ring. With everything happening to her, she still knew exactly who was behind it all.

I could see both Maggie’s and Renee’s perspective in that exchange. Maggie being from Metropolis and us getting more insight into the difference in the way they view LBGT people versus how Gotham sees things was interesting. We don’t normally get that, so it was a nice window into the humans that fill the cities that Batman and Superman risk their lives for. I did want them to get along and be friends and bond after Renee’s outing, but I understood why they couldn’t. What this also did was show me how different the two of them are. Yes, they may both be cops, women, and lesbian, but they are not carbon copies or substitutes for one another. They’re both fleshed out enough that they have differing personalities and paths that they travel.

I’m looking forward to how Renee’s story continues as well.

@nu52 That run on Detective Comics featuring Batwoman is one of the best all-time comics, in my opinion. The art is ridiculously beautiful and it’s a great story. I believe closer to the debut of Batwoman on the CW this October we’ll have a Girl Power book club on that arc. Please join us then!

I’ll definitely be on the lookout for it! I just keep adding to my endless list of books to read. This is the best problem to have

This was an excellent story.

@JLWWSM Michael Lark’s art was such a highlight for me. The emotion cuts through and especially in how he draws the eyes.

This story really resonated with me. 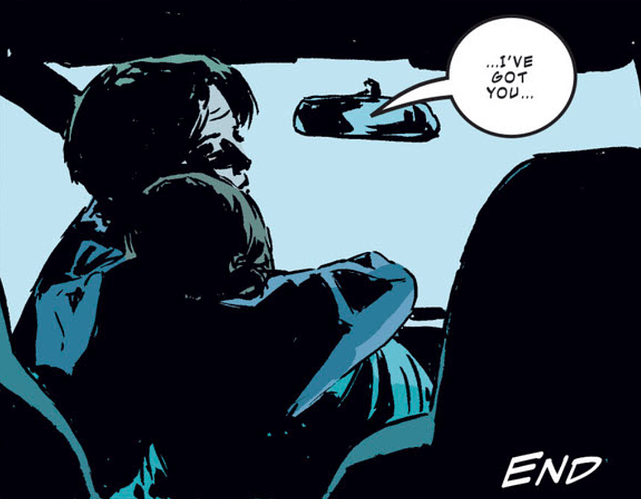 Yeah, one of the things I’m corrupts about in reading through the series is seeing where Darla and her relationship with Montoya heads.

I’m kind of scared for them since you mentioned she ends up in a relationship with Kate Kane at some point. I’m actually invested in these two together now

If it helps, its in continuity before the events of this story – Renee was still in the closet at the time, and it was part of why they split up.

Just got to it, but reading part one and there are already so many aspects here that set up an environment against her coming out as a lesbian, such as her families catholic background, her partner asking her who the “lucky guy” was that she was going on a “date” with. Haven’t finished the issue yet, but it was notable enough that I thought it was worth mentioning.

Oh! So they still have a chance

Yes Yazme. Watching those interactions was sad because I knew she is a lesbian and how hard those situations must have been

I love how Two-Face is portrayed in this piece tho. The snap from Harvey Dent to Big-Bad Harv is just wonderfully written within the dialogue and it seems to set up an explanation pretty well.

Great read and I loved Maggie’s role in this arc. This isn’t my first experience with Renee Montoya, but this was the first arc that I’ve read with her as a central character. Having read up to this point in Gotham Central, I am enjoying the view of Batman and his rogues from the perspective of active Gothamites as it’s a refreshing take on Gotham and the problems that are faced on a daily basis.

@Yazme the sudden change from Harvey to Two-Face was executed really well. You were able to tell exactly which personality was speaking at which time. The art and the dialogue pulled it off perfectly.