DC RELAUNCH! Is All but Confirmed. THE NEXT ERA BEGINS IN JANUARY! Bendis’s Run Ends! Endless Winter! Death Metal Ends! AND MORE

I’m just really really hoping that Bendis isn’t leaving DC (or worse; comics as a whole) after this. I’ve been loving his stuff over the past couple of years and I’m really sad to see Superman and Legion go.

I think most folks don’t understand what a “reboot” is.

Rebirth was a relaunch.

I can see DC headed toward a relaunch… not a reboot.

DC confirmed today that a reboot isn’t happening. I agree that a relaunch is happening in some capacity.

Thanks for that article. I missed it.

A threat of cosmic proportion to DC’s newest (and oldest) universe compels one of the most unusual groups of heroes ever assembled to take on the most mysterious foe they have ever encountered. What started in Detective Comics #1027 explodes out of Dark Nights: Death Metal to tell the story of the generations-spanning history of the DC Universe! Join the original Batman, Kamandi, Starfire, Sinestro, Booster Gold, Dr. Light, Steel, and Sinestro in their quest to save the universe before time runs out…
This intrigues me.

Also I have read several other sites the last few days and it’s pretty overwhelming the sigh of relief that Bendis is off Superman. 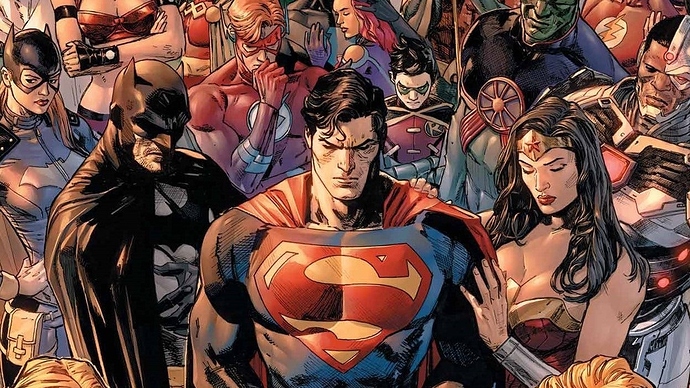 Jim Lee has confirmed DC's long-rumored 5G relaunch is no longer in the works, telling fans DC wants to "organically build up individual characters over the course of the next year."

Jim Lee confirms no reboot in 2021

We’ve been talking about this before. There’s multiple ways this could go.

Most titles get some sort of relaunch in the next 3-5 months. Superman seems ready for a new writer, Red Hood, Batgirl, and Detective all seem to be ready for a new team. The Flash, Justice League, Aquaman, and Teen Titans have just finished their main runs and need a new writer to set up the next run. 5G may not be happening, but I think what he’s saying is that "we won’t just start every title with a new #1, instead, we want to get to that point with each title when they are ready for it. “We want to organically get there.” can easily mean that they don’t want to just start everything over until each piece is ready for it.

Great. Now I only got 33 years of comics to read through before January 2021

The last reboot was in 2011, but this is closer to a more natural version of Rebirth if I had to guess. I’ll be coming out with guides for this as soon as I have more info.

So what constitutes a rebirth?
Easily we can admit that Showcase #4 that introduced Barry Allen started the silver age and that was a rebirth of the DC universe. C.O.I.E was a rebirth for almost every character. Now throw in New52 and rebirth…OK rebirths.
But what about when a title just introduces a new writer/artist team.
Dennis O’Neil took over and changed the direction of Batman, Green Lantern, and Wonder Woman.
Do we consider those rebirths?
Johns’ took over the Wally West Flash comic and It wasn’t a rebirth(ironically he did coin the rebirth phrase when he brough back Barry and I guess that was a rebirth as well as bring back Hal)
When John Byrne took over the Fantastic Four he changed their direction for almost 10 years but does anyone consider that a rebirth?
DC(Ron Marz) killed off Hal Jordan and introduced Kyle Rayner…that was a rebirth… because he was a new character.
The mighty and little Bendis killed off the Avengers and re-started them. Was it a rebirth or new direction?
Gerry Conway took over the JLA and gave us Justice League Detroit…well that was just a horrible redeath…never read those books.
JMS took over Spider-Man. New direction not a rebirth.
Jack Kirby on Superman.
Peter David on Supergirl and Hulk.
Cary Bates on the Flash.
What are these runs considered?
I see no rebirth/reboot/reimagining happening.
It would be cool if DC launched some monthly Ultimate type titles or multiverse titles to spin off different versions of their characters but what do I know.

A reboot is when a large number of titles have new writers/artist teams effectively creating a new entry point for the universe as a whole. DC Rebirth was the last major one but within 5 months of Dark Nights Metal, there was a soft reboot adding writers like Bendis on Superman, Snyder on Justice League, a bunch of New Justice Titles, and smaller soft reboots on G. Willow Wilson on Wonder Woman. I call this period “Rebirth Phase 2.” which was a much softer reboot then Rebirth’s launch with each new series was more naturally added, but some smaller initiatives which launched titles like Justice League Dark.

As I noted, a lot of titles seem to be hitting ends. There have been a ton of cancellations, big events are ending with big changes to the world, writers ending runs. It seems like there will be some big new stuff in January and if I had to guess by the solicits, it will be something in between the relaunches of Rebirth Phase 1 and 2. Lots of new creative teams with lots of new starting points.

Keep us informed, I appreciate the updates and information.

I’m working through my preliminary reading order for how to prep for the comics of 2021. I hope to get it out next week.

I feel that, I’m reading from the beginning of modern age (1987) I look forward to your guide though when I catch up

Will definitely check it out, thank you for the recommendation

The modern age isn’t in continuity anymore. It starts with 2011 now…

Oh. So, I can just start with the 2011 Batman series and get all the background of the Batman universe? I was starting with modern because I wanted all the Batman villain background, but if I can achieve that by just starting with 2011 then I’ll do that. Idk why it didn’t tag you in the reply @Nathan.Payson

Are you a Reel Big Fish fan or a Funhaus fan?