That could definitely happen, but Pa Kent would have to roll double 10’s ten times in a row to do it. (and then Doomsday would probably just use Hero/Villain Points to cancel the damage.)

Mutants and Masterminds 3rd Edition which is essentially the same system as DC Adventures still has releases now and then. It would be cool to see the DC Adventures community grow. Adapting the upcoming modules for M&M into the DC Universe could be a fun project.

I wish they had had the time to do more with DC Adventures. I’d have loved to see some adventures and more Sourcebooks published. I would have liked to submit some material myself.

I just recently joined with a group on Roll20 that’s going to try to run some Teen Titans games revisiting/reimagining some of their early stories. I built Speedy in Hero Lab last night.

Sounds awesome! Playing in the early years would be really cool.
The Hero Lab tools for that game are pretty great.

This is like a dream come true! I hope it means there is a chance of an updated reprint for DC Heroes 3rd edition.
https://www.dcuniverse.com/news/presenting-dc-universe-all-star-games/?utm_source=variety&utm_medium=social&utm_campaign=acq_service_1p_sf_none_na%20_dcu&utm_content=dcu%20all%20stars_trailer%20announcement_Img_1280x720_watch%20now

There is a Kickstarter happening right now for an amazing looking Batman the Animated Series miniatures game: 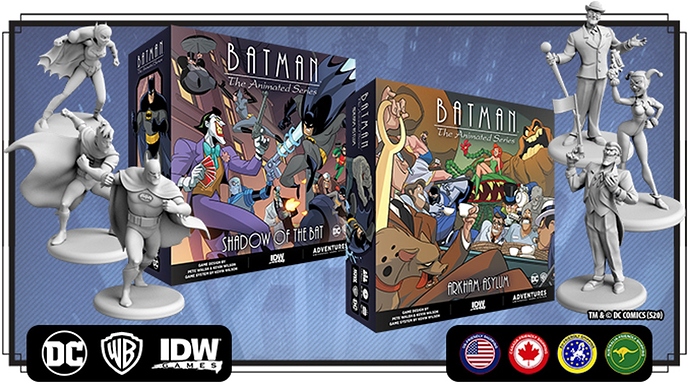 Return to the animated streets of Gotham City as Batman in the next entry in the Adventures Universal Game System.

Just learned about this show! I was actually going to pitch something similar when they were taking submissions, but real life got in the way and I couldn’t make the deadline. I really hope it leads to renewed interest in a DC tabletop RPG.

I played DC Heroes when it came out. My GM had a whole storyline where our Gotham City hero team had to deal with fallout from Crisis, including a few encounters with the LSH, as we rescued a very powerful blonde woman from Darkseid and they thought they knew what was up. We never did find out the truth.
We followed that up with a collection of Legion recruits that got put through the wringer, at that was just at tryouts.

In the years since I have played in, or run a DC heroes game (often both) with every tabletop group I’ve been in. About to introduce my newest group to the game, all of whom have only played D&D5E so far.

I’ve also played the Blood of Heroes game pretty steadily. I think the game system and powers were improved, but dear goddess, that artwork was horrible. Still, ignoring that, the game was great to see, and a lot easier to get my friends to buy than a $100 Ebay or Amazon copy of DC Heroes. One of my original game group of DC got to be a contributing editor for their core book. I was so proud of them.

DC. If you folks can work out the legal chicanery, please reprint this game. Aside from all the awesome gaming this system has given us, and the awesome stuff from the past (while I hope you leave as is) There’s also about 20 years of updated supplements you can put out, covering everything from Millenium to Invasion, the Ring Wars, Darkest Night, No Man’s Land…
The list just goes on, and while I have my own personal headcanon of preferred DC Heroes timelines, you never know when a little piece of info will inspire.

I would honestly be okay with them re-releasing the 3rd Edition, or even 2nd Edition source books, and offer suppliments to cover the various times and stories in the intervening years. Want to run using 90s Superman rules? covered. Want to use the 80s pre-crisis stuff? covered. Want to use post Zero-Hour? covered.
I may have been a bit unclear in my last post. I wanted to clarify.

The MEPS system and game itself only needs minor tweaks really.

Agreed, the 3rd edition MEGS rules were fine. If we just got a reprint of those I’d be happy. I already own it, but a new hardback would be sweet!
An updated character book or two, or better yet some modern Who’s Who books would be amazing.

I have never played any role playing games not even D&D. Although I wouldn’t mind trying it.