Finished Supergirl 39, my no spoiler reaction “I can’t wait for this story to end”

Welcome aboard @TheWombleBeast! I look forward to your thoughts on “Son of Superman”.

Regarding the Superman: Rebirth one-shot, I agree with what’s been said about it, as it was a perfect encapsulation of the major points that came before, while being a great lead-in for what would come after.

Hey, a little plug for our friends over at World of Wonder. This week’s reading includes the start of the Wonder Woman Superman New 52 series. See Superman punch a god. Good fun.

The comic version of Faora has never looked better than she did in S/WW. With regards to Daniel’s art, I’ll paraphrase Carol Marcus from Star Trek II: “Can he draw or can’t he?” (He can, oh, he CAN!)

The Wolfman 100 pager is a great read. It very much resembled Bryne’s Man of steel with a little of 78 sups to me. It seemed like a hybrid of those with all the little stuff in-between that you don’t get to see from those stories.

Rebirth came out by the end of the summer of 2016. I had been in a wilderness program for personal reasons that whole time so I was cut off from civilization and the latest for 3 months. Before, the New 52 had just ended and I wasn’t sure the direction DC was going to take. When I got back in August, the first five issues of every first wave Rebirth series was out.
Superman was back, so was Lois and they had a kid now. It was like a whole new world but you still had continuity. Seeing them take on the Eradicator to the moon and back, I was like the pilot episode to a Superman era. I love watching the Jon the new Superboy grow.

I usually like to pop in here more than once if it’s a longer read, like 6 issues. I didn’t this time because you don’t want to mentally breakup this run. This has everything. Clark’s personal dynamics with Lois and Jon, Superman figuring out his place in this new universe, a big bad that can stand toe-to-toe with Superman. Most of all, the stakes in this story aren’t the survival of Earth but something much more personal. The threat to Jon in its way makes the potential cost of loosing far higher.
Fans had a strong negative reaction to Jon’s up aging for a reason. We never had a superhero raising a young superhero with these power levels before. This was fresh, exciting stuff and Jon was normally portrayed in very interesting ways. Who doesn’t fell the pain Jon felt for accidentally incinerating his cat. Then you see the power a very angry little super dude is capable of. 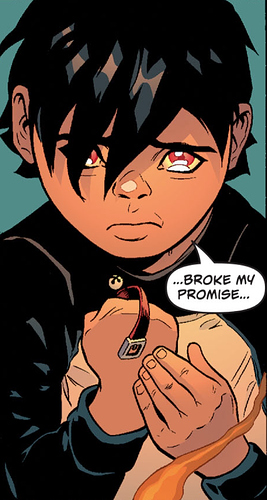 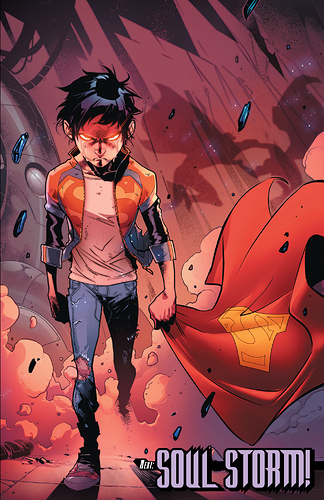 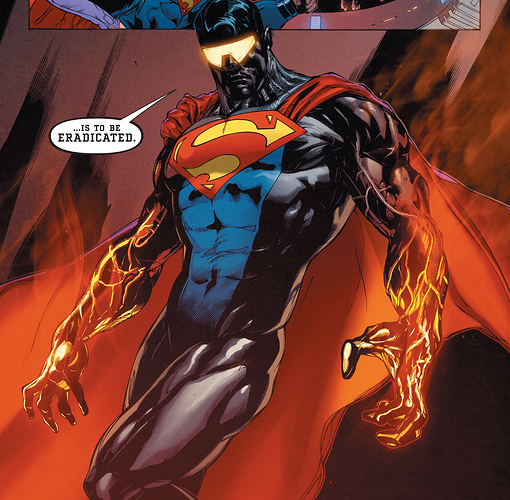 image1536×1505 2.32 MB
Superman takes a page from Dr Who in rousing others to do the right thing and fight evil 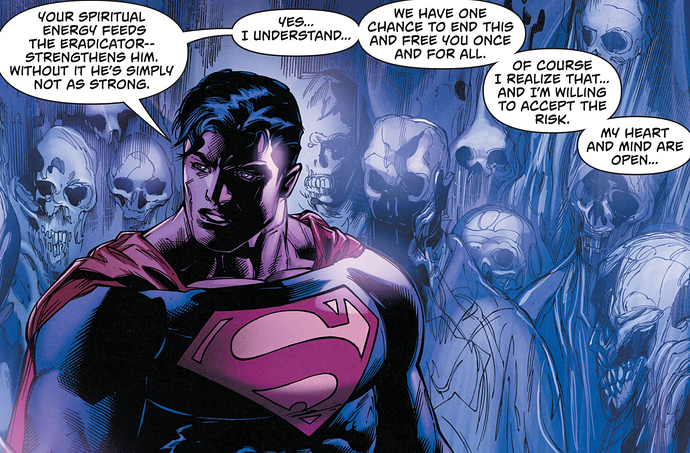 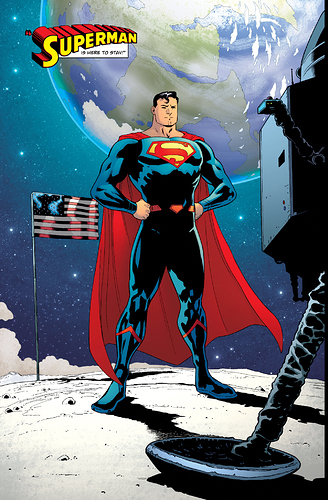 I just love this whole volume/series of Superman. Easily the best since v2 (the '86-'06 series).

BTW, if anyone’s hungry for more of this take on Eradicator, he’ll be showing up in this week’s Justice League #41.

@Don-El The current Superman is a combination of the pre-New 52 and the New 52 Supermen.

It occurred in Superman Reborn, but if you’ve not read that, I’ll refrain from further details so as to not spoil it.

Suffice to say, that was a pretty darn good story.

Welp, you can re-read it here in a few weeks if you like.

I read this as it came out, and very much enjoyed it. While Superman as a dad had been explored in “imaginary stories” and Elseworlds stories over the years–and even in mainline continuity (sort of) with Christopher Kent for a short time–this was the first time, to my knowledge, that the comics every really went there as a status quo.

I have no idea what I would have thought of it in my younger days, but I enjoy it now, and accept it as a natural progression, much like the marriage before it. I’m looking forward to the new TV series exploring this territory, as well.

I normally don’t answer my own discussion questions as those are for the members, but I’ll make an exception here:

I’d like to thank me for a fun week’s worth of entertainment, so thank you, me.

That stand alone issue was a particular favorite of mine because it was everything a story bridging two eras should be or at least it was to me. It honored what came before without destroying it and gave both Supermen their due. I loved it.

Oh yeah, it was a great intro to this Superman and tribute to the New 52 Superman…up until Superman Reborn happened and literally destroyed everything. No I’m not bitter, what are you talking about?

Do I need to run the Bitter Detector over that post?

Have you read the Rebirth volume of Superman before?

I read it as it came out, this is my first time rereading it. Looking at it, I think the first couple of issues are decent enough, dealing with more personal issues, but I think it kind of goes off the rails and becomes kind of nonsensical once Eradicator shows up. That feels like a reoccuring thread with this series, from what I remember: personal family stories are nice enough, but any story that tries to do something more traditional Superman was kind of all over the place – not unlike Tomasi’s previous Batman & Robin run, honestly.

Overall I would say that this run feels like DC saw what worked with Batman and Damian and wanted lightning to strike twice with Superman and Jon, and honestly, I don’t think they really succeeded.

What do you think of Superman being married and a dad? Does it work for or against him?

I think it’s a good idea in theory, but I don’t think the series really delivered that well on the premise, mostly because I don’t think Jon himself is characterized that well and comes off very bland to me. I think Tomasi was worried about making Jon come off too much like Damian with his issues, so he went in the complete opposite direction and came off with a kid that’s too idealized, like the perfect kid. And what’s the point of having a story about parenting if the kid is perfect?

What was your favorite moment from this week’s comic selection?

I think the best moment was probably Lois getting into the Hellbat armor to protect Jon. What’s especially cool is the thematic connection that has to Tomasi’s Batman & Robin, where Bruce used that armor to go to Apocalyps to save Damian. Hell, the whole idea of Bruce having a moon base is something established in the last annual of Batman & Robin.