Today at a Justice League panel at CCXP, DC’s started to reveal what new titles will be coming out in March following their “Future State” event, with five titles so far.

First, we have Suicide Squad, written by Robbie Thompson and drawn by Eduardo Pansica (who are doing the Future State: Suicide Squad series that comes before/after it). 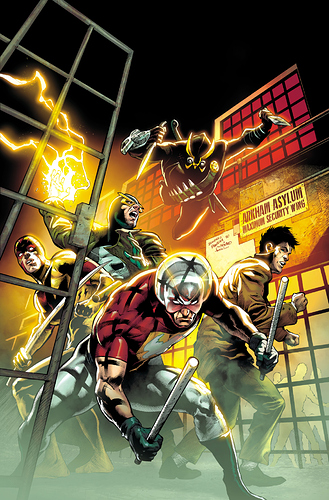 Got some movie synergy going with Peacekeeper front and center. Oddly no Harley Quinn though. First time the Squad hasn’t had her since the New 52 relaunch in 2011. We’ll see how that goes.

Next, Swamp Thing will get a new ongoing, from the same creative team as his Future State mini, writer Ram V and artist Mike Perkins. 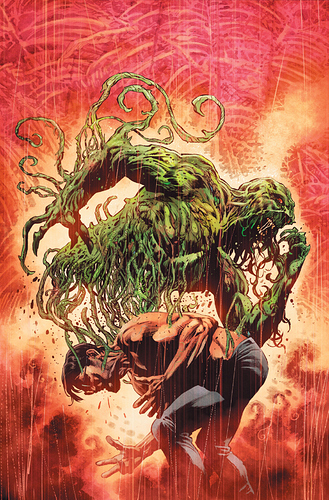 (On a similar note, it was also announced that Ram V will continue to write Justice League Dark, though it’s unsure if that’s a relaunch or if it’s going to keep the same numbering.)

After that, while it didn’t give any cool preview cover, they also announced a new Green Lantern book, which will be written by Geoffrey Thorne and drawn by Tom Raney, who is the creative team of the main story ‘The Last Lanterns’ in the Future State: Green Lantern anthology.

Finally, they announced that the creative team of Future State: Teen Titans, Tim Sheridan and Rafa Sandoval, will have a Teen Titans Academy book coming after.

If it wasn’t for the James Gunn movie, I would never have expected to see him in the new Squad book

I definitely see movie and TV inspired stuff which is cool. Swamp sounds nice and Titans academy has me really interested. Sounds awesome™

The only thing that “worries me” (not really) about keeping the same creative teams is that if they think they will use these books to build the Future State timeline they are sadly mistaken.
Example, if the FS Titans writer is going to make the new Titans series essentially “the road to Future State” it will never happen. There’s a 0% chance that DC follows through. The creative teams will be off the books in less than a year and a new team will go in a new direction and DC will do another soft reboot reset reshift return redo recycle.
This is not a commentary on the commitment or quality of specific writers and artists, history just isn’t on their side.

I’m really hoping Simon and Jessica will factor into the new GL book. But as long as it doesn’t put the focus squarely on Hal like Morrison did, then it should be better

history just isn’t on their side.

Gotta agree w/ you there. I remember how at least a few titles started setting up the time jumps that were shown off in the Futures End one-shots and how that never went anywhere. It’d be nice if there could be that level of coordination to preview where the books are going in the long term and then ultimately pay that off in a few years’ time, but there are just too many constantly changing factors to make that actually happen 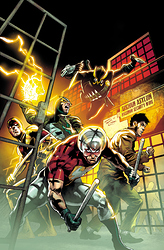 who are all the characters here? I only recognize a talon

Honestly, I think it’s pretty rad the new Suicide Squad book might not have Harley. Not because I hate the character or anything but because it shows people that DC is starting to trust SS as a concept now as opposed to it being just another vehicle to push Harley. She’s already mega popular, no need to keep pushing her in SS and all these events.

Other than that, I’m excited to see where Future State takes things and the aftermath. These lineups look good so far

I really want a GL Corps book that lasts. I understand that Hal is the big gun and John is a big player but there are too many Earth Lanterns to ignore. It’s easy to say they were on a deep space mission, and I think they just wrote off Jessica that way, but come on. I grew up on Kyle and (since JLI is my favorite series) Guy.

I agree, it seems that from Harley’s perspective she should graduate from SS

I’m willing to give any and all a try, tell me a good story and I’m in, bore me in anyway and I’m out. I dig Hal but not Morrison’s book, and we really need a new Titans after the last run. We’ll see about Swamp Thing but you gotta love the cover.

I absolutely loved the initial Rebirth approach of having 2 books that featured all 6 Earth Lanterns along w/ plenty of other important characters. I wouldn’t necessarily wanna see that exact approach brought back, but something similar would be amazing

Interested in all, especially Swamp Thing and Green Lantern.

I’m interested in what Justice League will look like. I have stopped reading Batman and Superman titles so I need that little bit in JL.

Really hoping we get a Vita Ayala Batgirls book out of this.

Although I’m honestly not that excited about the other stuff, I’m super excited for Teen Titans Academy!

middle is Peacemaker and down left my guess is Judo Master

Elsewhere, I’m on the fence about the new Wonder Woman team. I like Becky Cloonan quite a bit, but the series has been a trade read for me for quite a while. I’m not yet sure how I’ll continue with it post-Future State.

However, Wonder Girl sounds like it’ll be a lot of fun. I’m in for that one.

First let’s do the Future State turnovers. In March we’ll get Harley Quinn and Batman/Superman, with the Future State writers of those books, Stephanie Phillips and Gene Luen Yang. The artists are different, with Riley Rossmo and Ivan Reis (!!!) on each book respectively.

But the big one announced today was Detective Comics. It will come back with it’s original numbering with Dan Mora doing art, and Mariko Tamaki writing. While this is technically another carryover from Future State (they did a story together in Detective #1027 and are the creative team for the main story in Future State: Dark Detective), it is noteworthy because I’m pretty sure Tamaki will be the first woman writer on the Detective title. 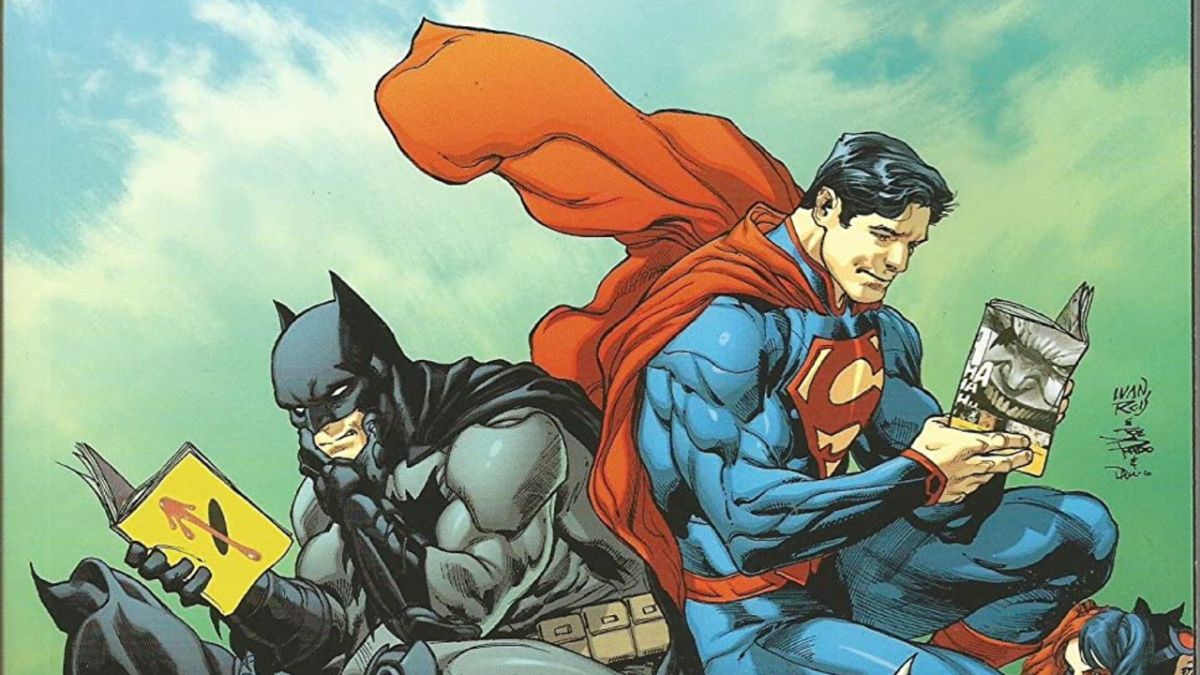 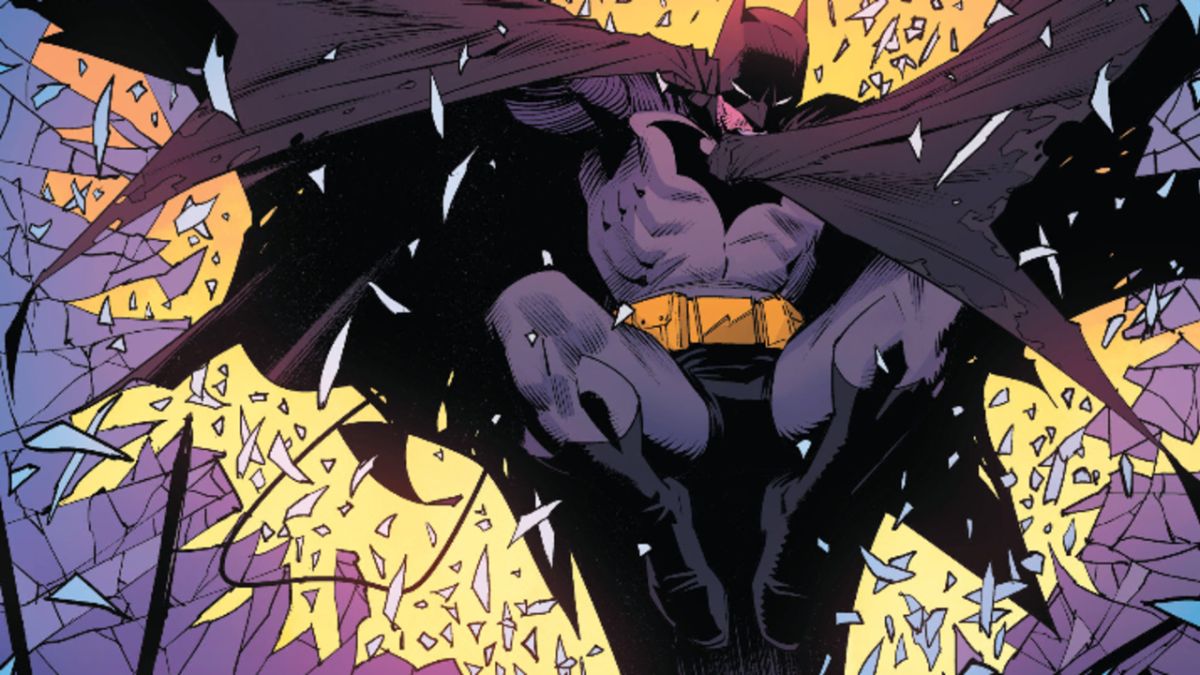 Excited for Reis and Yang on Superman Batman… er… Batman Superman. Yang did a pretty solid job on Superman Smashes the Klan, and Reis… well… I’m just happy my favorite artist will continue drawing my favorite character and Batman (another favorite). Great news there.