So…I read this. Great writing, great art, great paneling. But I really don’t like Superman. With that said…amazing, great read!

Same here, one of my favorite Superman stories!

Glad you liked it. What issue was your favorite? Thanks for stopping by!

This is by far my favorite of all of the various Superman origin stories, really fun and entertaining.

I would probably have to my favorite is the issue with my main man lobo. He is great!

I absolutely love American Alien! First and foremost, it looks at Superman as Clark first and Superman second. A perspective I’ve always been a fan of. Each issue using a different artist to show a different time in Clark’s life was a really awesome choice and definitely made the overall series better for it. Also setting the story within its own continuity really worked for the story. One thing DC Comics does best is the Multiverse/Elseworlds concept.

If I had to pick just one issue though I would say #3 for sure. “Drunk” Clark was hysterical, and I bet Landis had a blast writing the dialogue for that scene.

I agree. I especially love the “fear” in the first issue. I feel that is something a lot of Superman origins lack. It’s got to be scary. For all parties involved. Thanks for dropping by!

Issue 3 is so unbelievably fun. I remember the first time I read it. It was so surprising especially considering the prior 2 issues. It’s a blast through and through. I also enjoy the way it has fun with various characters in the DC Universe.

I just finished the first issue and it reminded me the youthful fun vibe of Supersons. I never considered what a young Clark would feel like while watching Alien movies. Poor Clark. The learn-to-fly scenes were fun. The art was absolutely perfect for the tone of the story.

Omg Lobo love him wanna see so much more!

Great read! The art was better with each issue.

I agree! Which issue did you like the art the best? I’m really partial to issue 2, but Joelle Jones really has some beautiful stuff in the 3rd Issue. Thanks for stopping in!

I love how excited he gets at the end of the issue. Reminds me a lot of being a kid.

As @MattMcDonald said, each issue feels different - both in story-telling and in art styles. I think that approach worked well in this series. 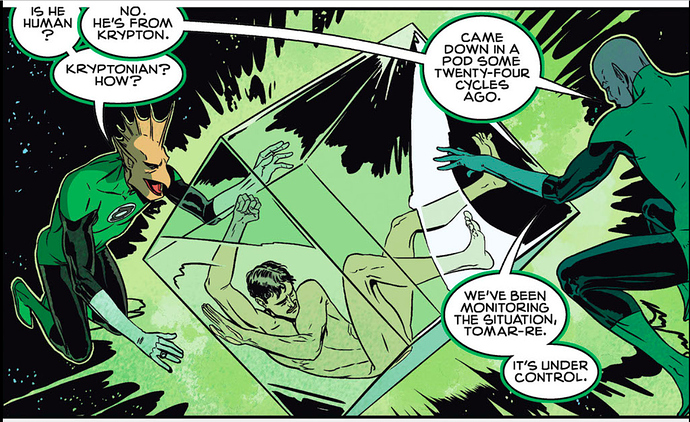 2.Each issue gives us a different peak into Clark’s life. Which one was your favorite and why?
No one issue really stands out, other than for the art on the variant or main covers, or the artist for that issue (with Francis Manapul being a particular favorite, but I’ve yet to see a version of Clark or Superman that he has done that I didn’t like or actually love). Other than ‘loving’ the art, no one issue really stands out as a favorite for any reason (although there were themes and aspects of some I was not thrilled with).

5.As always, what was your favorite moment in the book? Again, also a Manapul moment - the one where Clark is eating Chinese food on the roof. Quiet moments like this are always amongst my favorites in sequential art, no matter the subject matter or title.

1.Is this your first time reading Superman: American Alien?
No this is my second time reading it through but in between my last run through and this one I also have been reading other Superman stories (notably Grant Morrison’s run on Action Comics in the New 52) and so it was fun to revisit this story and see how different interpretations of superman can be told with the same core themes despite variations in narrative.

2.Each issue gives us a different peak into Clark’s life. Which one was your favorite and why?
I think issue #2 is my favorite because of how Clark’s parents reconcile his superpowers and how it could be used to benefit society. I think it is so easy to assume that every human is in control of their own life but this issue is a reminder that so much of the good in us is influenced by our society and upbringing. I love that this issue highlights the fact that his parents have all the same desires as any other parent but also see how much good he can do in the world with his gifts and also want him to use those gifts to help others. It is an affirmation of empathy and genuine goodness that the world needs more of today.

4.What moment do you think Clark becomes Superman?
I think it was his conflict with Lex and subsequent interaction with Lois that made him realize that he is Superman and why the world needs superman

5.As always, what was your favorite moment in the book?
Probably the moment when Superman throws Vampire through Lex’s window and rather than get mad or be afraid he simply laughs at him and calls him an idiot only for Superman at the end to paint a message to Lex reminding him that he will always be around. Great hero/villain dynamic! Fantastic series

Yes! Clark interacting with the Green Lanterns was so great! I loved seeing different spins on all the DC characters. The Batman fight was so cool. I loved how quickly Clark put an end to it.

Great pick for your favorite moment! I loved that issue as well.

Manapaul knocks it out of the park on that issue. You’re right, that shot of him sitting on the roof eating Chinese food was so good.

I loved the “too many onions” panel.