@msgtv Action #761 is my favorite book out of this week’s selections, and primarily for the reasons you cited.

The other reason was Diana’s introduction. When you want to get Superman’s attention, few ways are more effective than just flying up to his apartment and knocking on the window.

Diana also could have walked into the Kent’s apartment building and had Carlton, the doorman from Mary Tyler Moore, buzzing their joint: “Mister and Missus Kent, this is Carlton, your doorman. Wonder Woman is asking to come up.”

Oh, comics are fun. So too was actor Lorenzo Music.

I’ve only read the first book in this week’s selected readings and I loved the old school snowy setting. Is it just me or are cold-weather settings in comics very few and far between?

I would watch the heck out of a movie with Cupid/Eros in it… Kind of a Loki character causing trouble by making two major Heroes fall in love.

In fact, anything that brought the gods of Olympus as major villains into a DC film would be incredible. Something playful like this issue. Or the way Hades was a short guy with burning candles on his head in the Wonder Woman new 52 run. I would love to have something playful like that in a standalone DC film.

@HurricaneDaddy Welcome and thanks for chiming in on what you’ve read so far.

Wonder Woman. Love the Adam Hughes covers. But, Wonder Woman from Perez till New52 is too often beautiful to look at but very wordy and dull. There’s good runs in there, but books like this just love the sound of its own voice too much. And we have the dullest versions of Steve and Etta to up the dullness. High point for me was the faux View cast. I would much rather watch those ladies. And we get a Looker sighting.

His art is great as he draws WW and her characters very well, but he does tend to ramble on at times.

Okay I just finished the Wonder Woman issue.
First, thank you for drawing my attention to these issues. I don’t believe I had read any of them prior. I love the Action Comics story and I like how Wonder Woman referenced it when talking with Lois Lane later on. What a crazy Revelation for Lois to receive, that her husband and the woman she is jealous of spent a thousand years together. Other than that, the only issue I did not enjoy much was the Wonder Woman issue. It was a bit heavy-handed and also just kind of dragged along. I really enjoyed the art. But the story did not grab me at all.

@HurricaneDaddy You’re very welcome. I’m happy to draw people towards things new to them. I’m even happier when they enjoy them

No worries on RS Superman, although it’s absolutely worth watching should you get the opportunity.

“Which of this week’s comic adventures with The Amazing Amazon and The Man of Steel was your favorite?”

While Clark technically isn’t in it, Wonder Woman #170 was by far the best issue out of the whole bunch. Seeing Lois’ thoughts as she follows Diana around was very compelling, the kind of story we rarely see in the usual superhero stuff.

If I had to choose one of the full-on team-ups, I’d go with DC Comics Presents #76. While the connection of the villain to Wonder Woman felt rather sudden, it made for a unique hook. #32 was kind of funny in that the way that the two resolve their cursed lust reminded me a bit of a quest in The Witcher 3 where Geralt and Yennifer, who have had a twisted love spell forced upon each other for years, finally break it.

"In Wonder Woman #170, Lois Lane spends the day with Diana, observing a day in her life for a Daily Planet article.

“If you had this opportunity, what would you like to do with Diana as you observe a day in her life?”

I’d be interested in seeing Themyskira, but considering I’m a dude, chances of my getting there aren’t great. The Watchtower would definitely be awesome, if not just to see the view from space. Like @JLWWSM said, combat lessons would be awesome.

On the Action Comics issue – while reading this, I was reminded of the recent two-parter in Tom King’s Batman run, where he and Wonder Woman have a similar situation of fighting hordes of monsters in some supernatural dimension where time is different, and their commitments to their wives (or fiancee in Bruce’s case) is put to the test. In the AC issue, it took a thousand years for both Superman and Wonder Woman to be properly tempted and nearly do something. 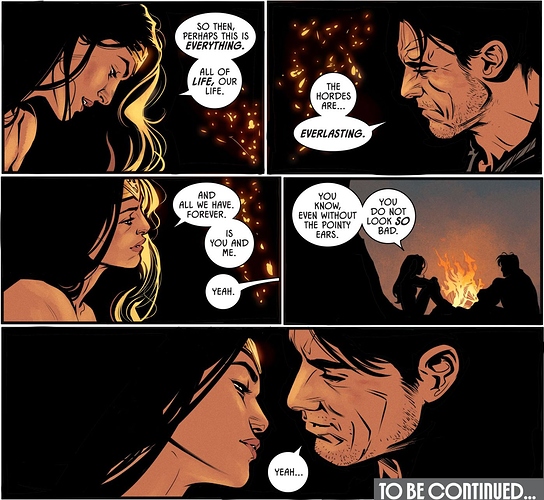 So I managed to see this episode of Superman via…dark sorcery, let’s go with that.

This was a pretty pleasant surprise. I’ve heard of “Ruby Spears” before, but I kind of figured it was something similar to Filmation/Superfriends stuff, which I personally have never been able to get into. The animation here, while rudimentary and stiff in some ways, looks a lot better here, and it felt like a more fantastical version of the Christopher Reeves films.

As for Wonder Woman, I liked how capable she was – she truly held her own and both saved the other’s skin plenty of times. I just wish that we could have gotten one of Diana’s rogues instead of Jem’s Evil Twin (with eternal bed head) and Gollum.

@Jay_Kay I’m glad you liked the Ruby Spears Superman add-on. Thanks for checking 'er out!

Being that the show debuted a year after Superman IV came out, and that it opens with a variation of the John Williams theme, I’ve always seen it as the animated continuation of Christopher Reeve’s Superman, albeit with a John Byrne inspired design for Superman himself.

Thanks for stopping by

Last Call for anyone wanting to jump in. Thanks to the Super Friends who hopped on the SuperWonder train this week

I like the sups and WW combo. It’s awesome when they share a little sexual chemistry. They look good together and can kick some butt.

@Ru-El So do I. I was a big fan of the Superman/Wonder Woman ongoing and its balance of focusing on Diana and Clark’s relationship while showcasing their superhero sides as well.

Thanks for joining the discussion.

I hate that I can’t reach links thru my iOS devices. I wanted to see what this order was & what u guys read & are discussing. I can’t reach the links anywhere. Only possible way I have a chance is if there all written out for me to read. I’m in the mood for WW & yes I can find some on my own, but it would’ve been so nice to not have to dig up something when it could’ve all been just 1 tap on a link & I could delve right in & get started.

@djd If you go back much further in the thread, @JLWWSM provided links for the Week 12 books.

Vroom
I can’t access links, haha, that’s what my whole post was about. Or did u mean there typed out somewhere that doesn’t involve a link. In other words, unless it appears in the following format i.e. WW #121, DC comics presents #36 etc. I can’t reach it unless it’s typed out. I can’t access any links, never have been able to since day 1.

Or did u mean they are written out like that individually but used the word link by mistake? If it’s a link I can’t touch it. If it says WW # 36 obviously then I can read it but I can’t open any links period, never have been able to.