The Superman Adventures issues of this week’s BC are fun, but the real meal pertaining to the Girl of Steel is in Supergirl #'s 75-80.

That’s where The Things happen.

Wow ok @Vroom you have out done yourself with this selection my good sir!! your right the SA issues were fun and I love that art style. But oh man SG was the desert for sure! Some of the dialog made me cringe in the first couple of issues. Especially the first few moments of #75 with the whole oh your pregnant and how did that happen. At first I was like “Vroom where are we going with this”. It was starting to feel like homework getting through 75-77. I did love the art though which made it easier to fight through. But then Issue #78’s ending (OMG) I literally laughed out loud when Sup’s starts to make the moves on SG.

Then the Wedding Panel (priceless) I loved it! I new things were about to get good once they started incorporating Crisis story plots. Very nice twist of events, and I certainly did not see this coming. Oh man did this story turn out good. So heartbreaking as well. I was happy seeing the throwbacks to the silver age atmosphere and that SG was happy and they had a kid. Then so sad for this SG when it was all taken away. Excellent pick man, really thank you. I would never have read this if you hadn’t selected it.

The kissing cousins thing was a bit awkward/creepy to me when I read MHR years ago, but it mimics the Silver Age oddity well, so I get it’s place in a modern Supergirl story.

Thanks for checking it out. Peter David and Ed Benes thank you too

Wait a min! sets down his batman mug
I thought that the version of SG that Superman Marries was not his cousin!

She’s not. This Supergirl, as I recall, was a protoplasmic alien shapeshifter from a dying pocket dimension who was saved by Superman and returned to Earth with him, taking up the mantle of Supergirl as a tribute. Then at the start of this series, said shapeshifter melded with the body of a dying juvenile delinquent named Linda Danvers, and then…I dunno, something about Earth Angels? Reading this last arc, I love how they even lampshade it within the story with people asking Linda about her story and her going “…Look, it’s really complicated, okay? I’ll tell you later.”

"In the comics and beyond, Supergirl has sported a wide variety of costumes (and identities) over her 60-year history. Her STAS outfit was created for the series and later made its comic book debut in Supergirl (1996-2003) #51, with its final mainstream DC continuity appearance in #80 of the same series.

That said, what do you think of Kara’s STAS/comic costume and where do you rank it amongst your favorite looks for her?"

Honestly? If one were to just ask me to think about Supergirl and show what first comes to mind, it’s this take on her from S:TAS/Linda Danvers, with her Michael Turner look coming a close second.

Actually, considering the previous talk about references to Power Girl, I wonder if the white tee was another nod to Karen Starr – white, blue and red was kind of Peej’s color scheme, after all. 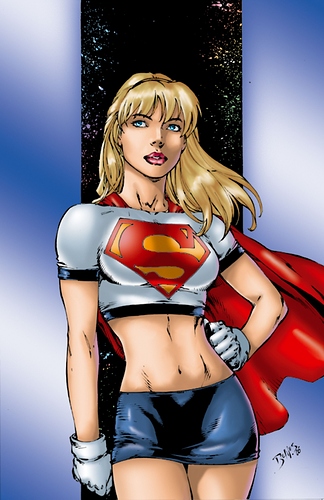 @Jay_Kay, Thanks for explanation. I never read this run and had no idea going in.

@Aquamon Sorry if I confused you. I meant that in the Silver Age there was a brief moment where Superman and Supergirl were Cousins with Benefits (shudder). As Jay_Kay elaborated, the main Supergirl in the Peter David Supergirl series is not Kal’s cousin.

For me, Supergirl got overly and needlessly complicated from the time the Matrix version debuted until the end of David’s run.

It’s as if DC wanted a brand new heroine, but decided to slap Supergirl’s name on her for the marquee value instead of taking a risk and creating a brand new name to go with a character whose background was new.

The Supergirl that debuted in Superman/Batman is my favorite iteration of her. Simple origin, but updated for the modern era and a fun personality. No needlessly complicated alien/angel riff-raff with an annoying wannabe John Constantine tagging about.

@Vroom: Let’s be clear, Silver Age Supergirl and Superman never actually touched any bases in those stories. As I recall, the only story that really played with it was when, feeling lonely herself, she sees Superman without a romantic partner and tries to set him up with different women. There’s a scene where he admits he would want to be with someone like Kara, but wouldn’t because it was unlawful on Krypton for cousins to marry; which was…a choice to make. You know, it isn’t because cousin-banging is gross and can lead to bug-eyed kids, but because this dead world said it’s a no-no. But yeah, outside of that, that’s the extent of it.

Silver Age Supergirl did have a relationship with her horse, though.

@Jay_Kay Supergirl and her horse makes me shudder even more

Okay, so I did finish the main event comic reading of this week, and overall – great story. Peter David delivers his signature mix of drama and wit with all these compelling characters. Ed Benes really delivers some great stuff, and you can see why he became a big name artist for a time from this book, delivering both dynamic action and expressive faces for comedy and tragedy. This definitely compelled me to want to go back to the beginning and follow Linda’s story from the beginning.

“Did the Linda Danvers Supergirl get a satisfactory conclusion in her final comic story? Do you think Linda’s decision to try and spare Kara was wise or, given how it could have had dire consequences for the multiverse, foolhardy?”

All that said, though, I’m not sure if I fully think this was a satisfactory conclusion to her book; or at least it was, up until the last couple of pages, where Clark is reading Linda’s letter. Like we get that Linda’s retiring from being Supergirl, and the reason is understandable, due to the loss of the life she had in the Silver Age world. But I think it would have worked a lot better if we even just saw her flying away, doing something in the mountains or something. LIke, that note is so vague of what she’s going to do after this, that I could see her doing anything from being the best older sister she can be, to just ending it somewhere because she can’t take it anymore. Just a few minor tweaks would have made it much better.

As for Linda’s decision to try and save Kara…it is foolhardy in a sense, but it talks about in this story how that’s kind of what these superheroes do – they’re given an impossible situation, and they find a way to save the day. What’s funny is that at least initially, Linda totally got the better end of the deal: she was assertive enough to not just be some “secret weapon” hidden away in an orphanage, she was a respected part of the community in a way she never was, the horrors of facing down evil were pretty benign, and most importantly, she was able to become a wife and a mother. And what’s tragic is that in the end, Linda was the one who lost it all.

@Jay_Kay Those are my thoughts on Linda’s efforts to save Kara as well.

A noble idea of course, but for the multiverse to unfold as it should, Kara sadly had to accept her fate.

That’s another tragic element of it – Kara really didn’t. Remember, this isn’t a Kara who’s been fighting bad guys for years, this is a scared teenager fresh from Argo so it’s perfectly understandable that she freaks out when given that ultimatum. Even at the end, she doesn’t hop into the rocket of her own free will, Linda has to basically knock her out.

@Don-El Sounds good! As it’s now been two weeks since July 4th, I’ll throw some burgers on the grill too

@Vroom
Every time I see a Supergirl/Comet reference I think back to Adam & The Ants “Why do girls love horses”. Originally a Peel Sessions recordings from 78, it finally ended up as an official B-side in 82 for “Desperate But Not Serious”.

@DeSade I just listened to that song, and I’ll say two words: clip and clop.

Catchy tune, thanks for pointing it out.

Little Girl Lost Part 1 from Superman Animated series- the music is great, very much like the first two Superman movies in the late '70s / early '80s.

Having Kara on the farm of course similar to how Superboy Conner was frustrated when he was shown staying with the Kents during Geoff’s Teen Titans run.

I’m surprised to see Superman’s powers toned down so much, almost like he was in the late '30s (“able to leap tall buildings in a single bound”). Driving around in a space ship? Wearing a space suit? Interesting.

The parallels also of Olsen wanting to get to the next level before he is ready and Kara having similar unrealistic expectations is fun. Honestly, when is it ever proper to have someone under 18 years of age facing death to protect others on a regularnightly basis? I think that only happens in third world child armies in reality…

Little Girl Lost Part 2, Superman Animated. BINGO! i like the way a teenage JImmy Olsen is portrayed here, snooping around coming up with stuff. He’s not exactly Einstein or Sherlock Holmes, but he seems to have an “intuition” for finding clues, which is fun.

I think you all discussed earlier the comics version of this story that mixed together Kara, Apocalypse and Superman.

Fun story, definitely the “simplified” version of the same story elsewhere, and the action was really good and entertaining in some key scenes!

On to the reading part of this week’s World of Superman Book Club fun!

The 2 Superman Adventures comics were surprisingly entertaining. In the first, a satisfying way to stop the Argo non-Kryptonian version of Zod. In the second, fun to see that concept of a "sliver’ of Brainiac coming into play, much like we are seeing in the Season 2 Krypton storyline with Seg.

I also have enjoyed Bret Bevins’ art from time to time.