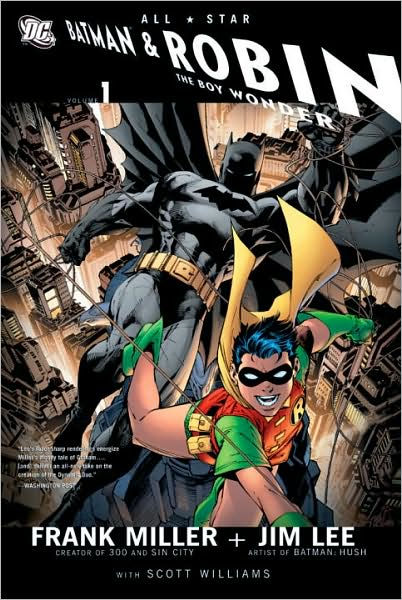 How’s it going Gray Sons (and Daughters) of Gotham? We’re gonna do something a little different this month. Instead of doing something biweekly, we’re going to dedicate the whole month to reading All Star Batman and Robin, the Boy Wonder #1-10!

The all-star duo of Frank Miller and Jim Lee come together to retell the story of how Batman recruited Robin into his war on crime.

If you have any questions, feel free to message me (@Nightroia) or @A1waysAJ

This is gonna be fun to talk about, I hope.

Other than the iconic “I’m the ■■■■■■■ Batman” he truly tortured Dick. Nightwing definitely wouldn’t be so optimistic, happy-go-lucky, or trusting. Honestly, he’d probably turn out just as messed up as Dick on Titans. So yeah I wouldn’t really like that.

One of the things I genuinely like about this series is the way that Bruce tries to impress Dick and gain his approval. As much as he goes on about soldiers and war, what Bruce really wants is a little brother who looks up to him. He eventually realizes that he needs to take on a mentor role, and the core of the story seems to be Bruce’s arrested development and the impact Dick has on his growth into maturity. He suddenly has to become responsible when he was once free to be reckless.

@AlexanderKnox Their relationship definitely starts out rockier than most of his other origins, I think, but he definitely seems to warm up to Dick and vice versa throughout the series. Bruce definitely seems to be stuck in a teenager mentality (at least in my opinion). He’s overly violent, reckless, and very opposed to authority (though he does tolerate Jim Gordon). Not that every teenager is like that, but to me, it speaks of immaturity.

And Miller seems to be trying to make sense of the Batman that we meet in 1939-1940, the one who would actually think that abducting a freshly-orphaned kid at the circus and training him to “exterminate” criminals (quoted from 'Tec #38) is normal behavior. As bizarre as the results may be, it’s at least a greater effort to incorporate elements from the original comics than anything we see in Miller’s more popular (and admittedly more palatable) Year One.

I think a big part of what this series was trying to do was take the conceit that we’re familiar with, the whole “Batman needs a Robin to not succumb to his inner darkness” thing, and push it further than ever before.

We start with and mostly focus on Dick, and it works to highlight the fun, idyllic life before it goes wrong. 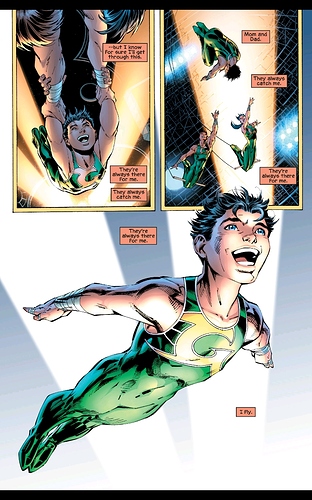 I’m not sure how I feel about the change to how Dick’s parents are murdered. I guess it helps further cement the similarities between Bruce and Dick, but I think I prefer it to be something less obvious of a murder, something that Batman has to solve. But I guess it does save time, and Zod knows they streak enough plot developments in this series. 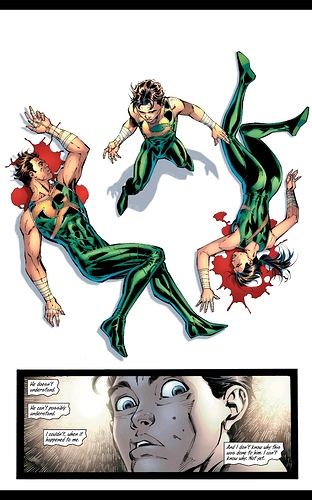 In terms of other characters, I do like Vicki here. While I think most people just remember her from this: 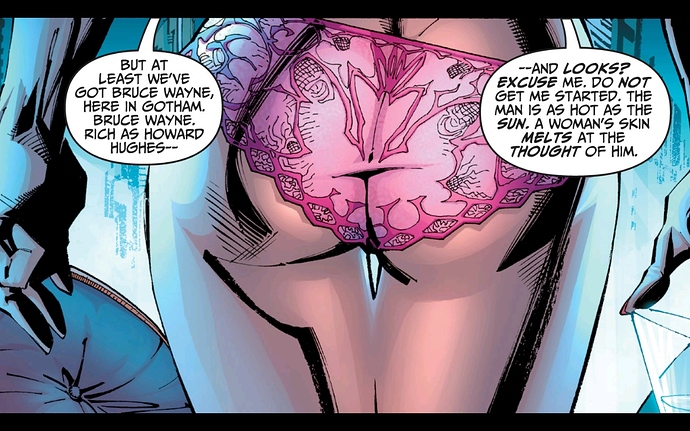 She does come across in the writing as pretty tough and determined when she sees injustice. 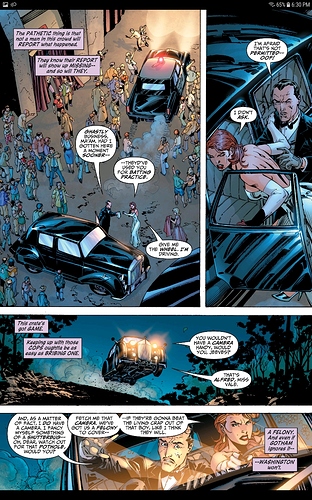 And of course that last page with Batman is just awesome. 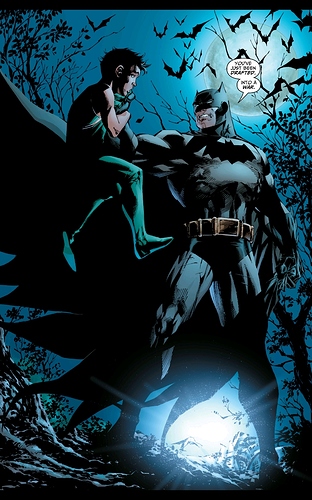 I haven’t reread yet for the club, but that reminded me of Vicki apparently likes to just lounge around her house in lingerie and high heels. I remember I found that to be VERY realistic, especially the high heels part.

You mean that’s not a thing? What other lies has Instagram been telling me?

The lingerie part is not 100% inaccurate, but that high heels thing? Yeah, not a thing.

I’m not sure how I feel about the change to how Dick’s parents are murdered. I guess it helps further cement the similarities between Bruce and Dick, but I think I prefer it to be something less obvious of a murder, something that Batman has to solve.

I also don’t like this version of their murder as much, though I see how they might have been drawing parallels to Dick and Bruce. However, I think just having his parents murdered is parallel enough. I agree that the wires being tampered with and his parents falling to their deaths is more of a mystery for Batman to solve, especially since (at least in some versions) people around Dick doubt his claims of witnessing a man messing with the wires, chalking up the deaths as accidental. It pushes Dick to try to solve it on his own (at least until Batman helps).

I also believe that them falling to their deaths is much more personal to Dick than a gunshot to the head. Humans often develop a fear and avoidance of reminders of traumatic events, and I’m sure that Dick has a fear of falling to his death after this. Yet, he defies that fear, flying around as Robin with grappling hooks and leaps from building to building. His actions become far more significant than if his parents had been shot in the head after their act was finished, feet solidly on the ground.

I completely agree with you. I think that is what Miller was going for. I have to say that I actually enjoyed the series as it went on.

I think that Dick’s origin in this is much darker than anything before. Bruce just was abusive at the start. I think that Nightwing as we know him wouldn’t have been much like the one we know today. I think the story was going on a path where both were coming to the realization that they need each other. Like I said earlier, I thought it was getting better in spots as it went on.

It really is unfortunate that it was never finished.

The other thing we can keep in mind is that this story is in continuity not only with Year One and DKR, but with DK2, which Miller had already written. Now THERE’S a controversial Dick Grayson story, if there ever was one.

The other thing we can keep in mind is that this story is in continuity not only with Year One and DKR, but with DK2, which Miller had already written. Now THERE’S a controversial Dick Grayson story, if there ever was one.

That is exactly why I asked how Nightwing would turn out based on this origin. I’ve been waiting for someone to point out that technically this Dick Grayson would grow up to be the one from DK2.

I was thinking about that too. I like DK2 more than the average fan, but what was done with Dick there was…pretty bad. 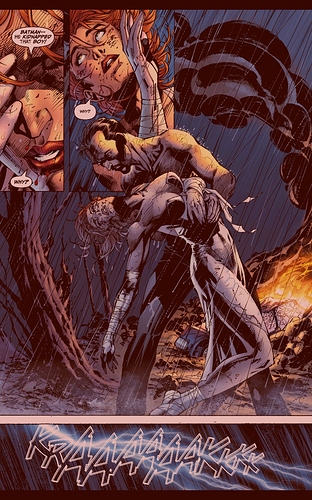 This is mostly Batman and Dick “bonding” over running over cops and blasting them with jet fuel. Fun for the whole family! It also features the most infamous Batman line of the 21st century. 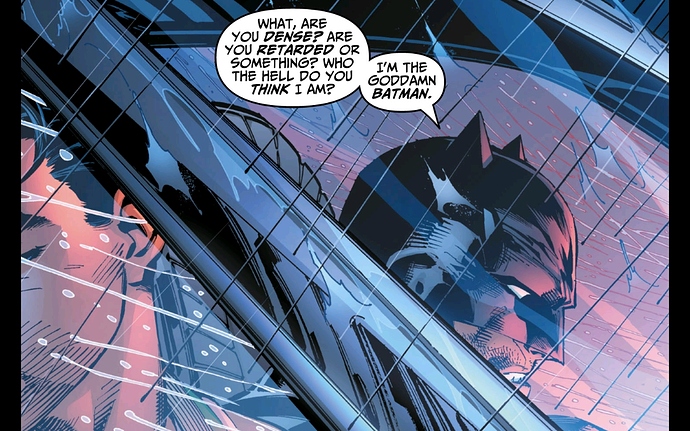 What’s interesting is the inner thinkings of both characters. Dick almost immediately figures out that Batman is putting this on. 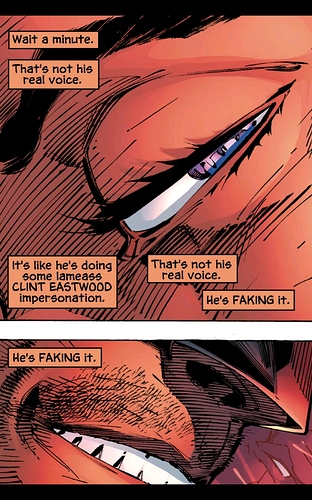 And then there’s Bruce’s monologue, showing the doubt and turmoil he feels in behaving this way to Dick. 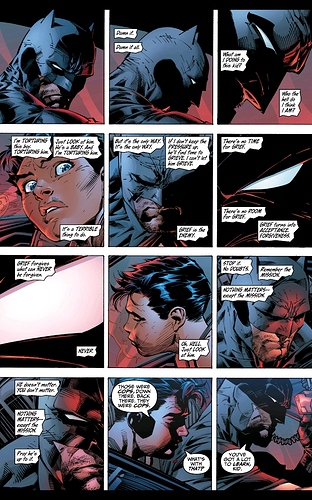 I’d also just like to say that I love the art for this series. 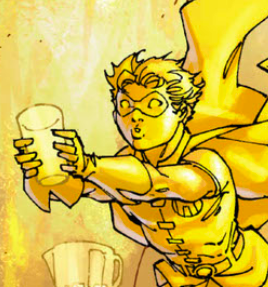 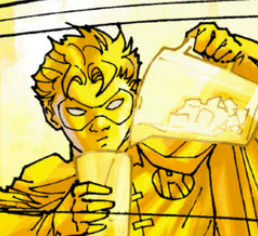 Maybe I’m just biased by how adorable I find Dick in this.