Exhibit A B C why I can't stand Grayson!

The guy just does not care about the human wreckage he leaves behind. Paralyzed lovers. Tamaranian baby mommas. tsk. tsk. tsk. 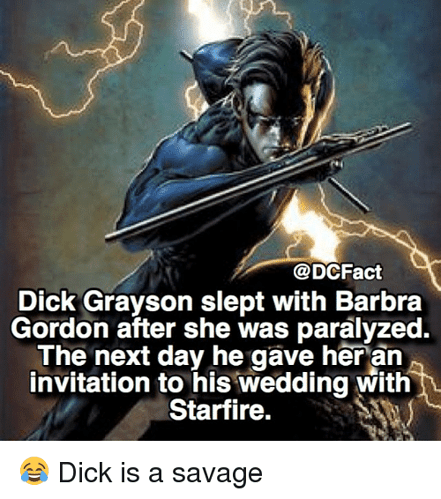 I truly hate that issue. Sometimes it’s a good thing that a crisis comes along and resets everything. It gets rid of horrible things like that

What issue is this?

With the New 52, that garbage was retconned. Grayson remained by Barbara’s side through all of her physical therapy after she was shot.

I also want to know what issue this happens in. Is it the 90s nightwing run?

What a dick movie

I think it happened in Nightwing Annual 2. Pretty much no one likes that annual and even when it was cannon people refused to see it that way. It was a very out of character thing to happen.

Basically, what EmmaRose said… that annual even contradicted previous flashbacks in Nightwing 62 (from Dixon era) to Dick watching over Barbara in the hospital. The referenced Annual 2 ‘flashback’ was never alluded to in any other comic that I’m aware of and frankly does a disservice to all three characters involved (though Dick obviously comes off the worst). I think somebody was trying to give a definitive reason for Dick/Babs not to have been an actual couple in the past as well as some relationship insecurities inserted by various writers; however, I don’t think Dick would do such a thing to Kory and Babs or that Babs would actually seriously date him after such a thing (e.g. her reaction to the Ollie/Dinah proposal). It’s a shame really, because it’s such a dark spot on Dick’s character and relationships that it overshadows some nice moments, such as exploring Robin’s couch confession back in the 70’ Batman Family.

Dick Grayson is the hottest male non-villain in the DC Universe. Can’t wait for him and Harley Quinn to hook up.(From Old Lady Harley we know that he is one of her future spouses)

They did hook up in the Batman and Harley Quinn movie.

He banged babs, starfire, and Harley…I mean who could blame him am I right guys

Stopped liking Grayson when he return to being Nightwing. Grayson showed the fans what the 52 could have been then you brought Wally West in REBIRTH then you killed him,Roy and turned Dick into Ric (DC’s answer to Jason Morgan from GH) makes you wonder if DC knows what they’re doing

As far as I’m concerned, that issue never happened.