Do you have OCs? Many of us here do! Let’s use this topic as a page to share our OCs with other DC fans.

Rules of this topic;
Criticism allowed, but only if asked for
Be supportive
Don’t put people down based on their ocs.

Oh this is a great idea! I love seeing people’s concepts!

Okay, here’s one I’ve been working on. It’s got a bit of backstory, sorry!

Not every colony answered Krypton when she called for her children to return. A small moon colony in a solar system—not very far from Krypton, but with an extraordinary view of the aperture of a natural wormhole—was one such encampment. Here there were little more than 200 scientists and their families in constant observation of the wormhole. The colonists decided among themselves that, while most of the settlers would return to Krypton, a few key researchers would remain in secret. Though they would be cut off from their home world, they believed that their work was crucial and would eventually be rediscovered by Krypton when it gave in to exploration again.

Those families, over the years were whittled down as they succumbed to natural processes without the full might of Kryptonian medicine. The last to man the station was one man, the son of an original colonist, and his own daughter, the first and only child born on this outer world. Lav Sol-Ar became a brilliant scientist in her own right, caring for her aging father and their research. Two generations removed from Kryptonian genetic engineering, certain mental disorders had reappeared—she had something close to an anxiety disorder.

When her father died, she buried him herself, and then sat gazing, not at the wormhole, but at the home world she’d never known. Would she return now? Could she return? There was still a small ship that hadn’t been stripped for parts, with its own AI. She could theoretically make it. But what would she find in that home-that-never-was? She was different, wrong in some senses. A mutation that had been eliminated in modern times.

It was while watching Krypton through their instruments that she first saw the implosion, and then rapidly expanding explosion as Krypton collapsed in on itself. Pieces of the planet became so hot that they fused and created new substances. The computer assured her that such substances would be highly radioactive and highly fatal.

Though she was far from the planet, it didn’t seem far enough anymore. In a matter of hours the moon would be bombarded with radioactive fragments of the world her grandparents called home. She desperately prepared her equipment and evacuated to the last shuttle. Before engaging cryosleep and hyperdrive, she reasoned that there had to be places in the universe where other Kryptonians had made the same decision her forebears did. She set the AI to find any unique Kryptonian signature beyond the radioactive range of Krypton’s demise.

Already under, she of course had no way of knowing that the wash of the explosion knocked her ship through that very wormhole her grandparents had abandoned their home to study.

Oof that’s a bunch more than I thought it would be! To;dr: Kryptonian woman scientist on a secret research base flees as Krypton’s radioactive explosion threatens to rain down on her. Her ship slips into a wormhole and she’s ejected millions of miles from her previous location, where her ship picks up the signal of Kal’s ship (and maybe Kara’s) and sets course for Earth!

And because I guess this wasn’t long enough, here’s the concept art I was doing 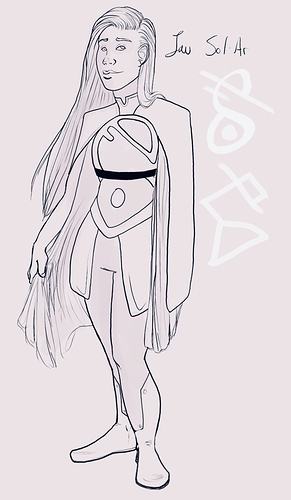