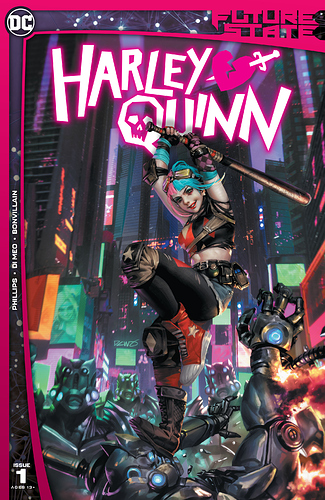 Unfortunately, this is my first negative out-right fail of a reaction to a Future State title. There’s nothing here that makes me want to pick up this next issue of Future State or an ongoing HQ series with this team. Where to start? I don’t care for the character design, between the new look and the style of art it looks like they’ve de-aged Harley to a 16 year old, rather than a woman old enough to have a PhD. That leads into the overall art style that has something of an animation/anime feel but is so dark and static that it feels lifeless. The absolutely necessary Harley banter isn’t funny or surprising or engaging in anyway. Which perfectly matches the story itself where one of the most frantic enegery driven characters in the DCU spend 75% of the issue sitting in a chair talking.
Every relaunch has a fail, it is inevitable when you start so many series at the same time. The sooner DC moves on from this team and take the better.

I’m sorry to read that​

@msgtv, because I enjoyed it! It’s not an average HQ comic, thats for sure! But thats the point, right?

I’m a bit picky w/ how I like Harley to be written, and I think Stephanie Phillips did a great job capturing Harley as both hammer and scalpel: a legitimate doctor, but also a woman engaged in a personal rebellion. In other words: She clearly did all the right things, but wants a different, more honest life (and gives zero f**ks

). We also get Crane which results in some nice exchanges on clinical and cognitive psychology.

as much as the next person, and while we get a small taste of that in this first issue, Harley’s analytical abilities and how she still remains an optimist is a HUGE reason I’m a fan. As we know, Harley is determined and unpredictable, so I’m certain that’ll come in to play and we’ll get a bit more of her crackin’ skulls, both literally and figuratively. The fact she can do both is why she’s dangerous…and fun! To me, that ground work is being laid nicely. She’s already playing mind-games w/ Crane.

I wasn’t sure about the character design when I saw the cover either. She’s got to be old enough (and mature enough) to have a doctoral degree, so I’m happier when she’s drawn/written accordingly. This is close enough I can work w/ it. The panels were frenetic, colors were rich, dialogue is smooth, somethings brewing w/ Black Mask—Overall:

I’ll be back for another issue. And I’ll be extra happy if Ivy

Awesome I’m glad that someone who digs this version chimed in. I really do not like being harsh on people’s work. It’s a matter of taste or experiences that result in how art or literature hits you. And, because it doesn’t work for me doesn’t mean it doesn’t work. So, good to hear from the other side.

Same @msgtv I was about to post a thread for it, and I was happy to see someone else…one that felt differently too! I like opposing opinions, so I agree

: I’d rather all the sides are represented.

I really do not like being harsh on people’s work. It’s a matter of taste or experiences that result in how art or literature hits you.

Totally understand. When I don’t like something, I try to consider someone else might love it when choosing my words. Disagreements on art & entertainment don’t have to be taken as insults, because, like you said: they’re unique. Not invalid.

I liked it pretty well – it was a good showcase of Harley’s intelligence and ability to read and outsmart anyone she encounters. Harley herself was a bit more…subdued than I’m used to, but that could be because of the kind of story they’re telling. After all, most of her big stories in recent years, like the Palmotti/Conner run and the animated series were VERY over the top.

Good News for Harley, I’m in the minority so far

This was my favorite issue of the week. Partly for the art, and partly for the different take on Harley Quinn which I liked a lot.

#2 Harley Quinn #1 → I don’t know how I feel about this new version of Harley, but I really don’t care because this might be some of the best art I’ve ever seen for a comic. It felt like I was watching an animated movie play out in real time and it made the comic so much more believable than it might have otherwise. In the small moments without action, the art did wonders to keep it interesting. I thought the story was super interesting and leaning into the smarter side of Harley was cool, but I really just wanted to look at the art, which I’ve never said before in my almost 4 years reading comics.

I’m even more in the minority now.

Lol. I don’t really like normal harley comics and on top of that this is an in continuity harley book, so it wins points there. It also had the most interesting art, and a fun premise.

I liked this issue quite a bit. I think sometimes Harley can be written a little too loony toons, so I thought the approach here gave her a nice balance.

lol, I was disappointed with the batman comic, so I’m probably in the minority opinion on that. That’s just how it goes sometimes.

was disappointed with the batman comic

Harley’s analytical abilities and how she still remains an optimist is a HUGE reason I’m a fan. As we know, Harley is determined and unpredictable, so I’m certain that’ll come in to play and we’ll get a bit more of her crackin’ skulls, both literally and figuratively. The fact she can do both is why she’s dangerous…and fun!

I’ve read an issue or two of Harley before… watched both movies and some of the DCU show… I like the character but was never a huge fan. Yet, something about what you’re saying here is making me look at her in a different way. I guess I never really stopped to consider that duality before. You may have (potentially) just nudged me to check out her escapades going forward

I guess I never really stopped to consider that duality before. You may have (potentially) just nudged me to check out her escapades going forward

That’s great to hear @moro! I definitely understand where you’re coming from. There’s always hits and misses, of course, but sometimes relying on our core understandings of any given character can really help w/ the enjoyment factor! Hope that’s the case for you going forward. Goodluck on your Harley travels!

I’m a tag away if you got any Qs, or stop by and see the Crew!