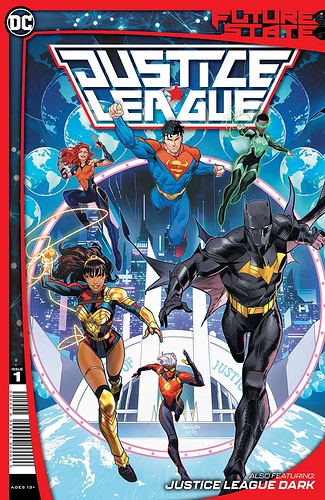 Bottom-line, two very solid team stories with very interesting threats opposing our heroes. On the one hand, this is a very traditional Justice League with six of the heaviest hitters in the DCU. But, then again it’s completely different because it’s a new generation in those uniforms. Jon, Kara, and Tim are all more mature and established they we saw in there individual titles last week, and this feels like a Justice League that’s been around for a while. The rule of no fraternizing is a nice twist, though it seems like half the team is ignoring it, and may have contributed to them being fooled by the doppelgängers and taken down so relatively easily. I haven’t read Far Sector, but this small peek at that Lantern makes me want to pick give it a try. And of course, the news in the genre press was about the new non-binary Flash. Didn’t learn a lot about them, but fit in nicely.
The Justice League Dark story was an equally good read, though a completely different tone though I have to say I knew the old guy was Fate from the first page. Don’t know why, just did. But, nice dystopian magical regime story. Zatanna is a boss, as always. I’m enjoying this two issue tales, they feel bigger than they actually are. I would have liked to follow them over six issues, but this makes for a nice quick pace.

I wonder what will become some of my favorite characters like The Penguin and Stargirl in Future States? Can’t wait to read them!

Haven’t shown up, yet

Confession: I went into Future State skeptical at best. After reading a few of these, I’m totally on board with whatever DC has in store coming up. There wasn’t a whole lot of action in this introductory issue, but it did a good job of, well, introducing the team & their personalities, while quickly setting up the world they live in.

Not even sure if Hyperclan is a thing now. Hadn’t really dawned on me that heroes were filling the same emotional roles as their predecessors.
I was skeptical but willing to give Future State a try for its two months, two weeks in think they totally nailed it story wise, and they’ve probably found themselves a few new characters they can build on.
Also, not that I hate it, but if you’re gonna be Superman you gotta have a cape.

Also, not that I hate it, but if you’re gonna be Superman you gotta have a cape.

They gave him the cape in Superman/Wonder Woman and it was great. Why not everywhere else?

The Hyperclan were enemies in Grant Morrison’s first arc of JLA – a group of white martians who disguised themselves as superheroes as a vanguard for an invasion of Earth.

Remembered The White Martians, didn’t remember they had given themselves a cool team nickname

On the timeline issue. At this point, I almost don’t want to know. It feels like I should just enjoy this stories on their own knowing they kinda sorta fit into a larger picture. Don’t want to be bogged down worrying about how what matches up with what. Other than issues of capes and flying Amazons of course.

Agreed. Like I said, when I briefly checked out the timeline graphic, I felt like it didn’t really add anything to my enjoyment of the stories. Better to follow the comics starting March and see over time what (if any) will start coming to fruition of these Future State issues.