Future State! The Launch of This New Event Has Arrived! 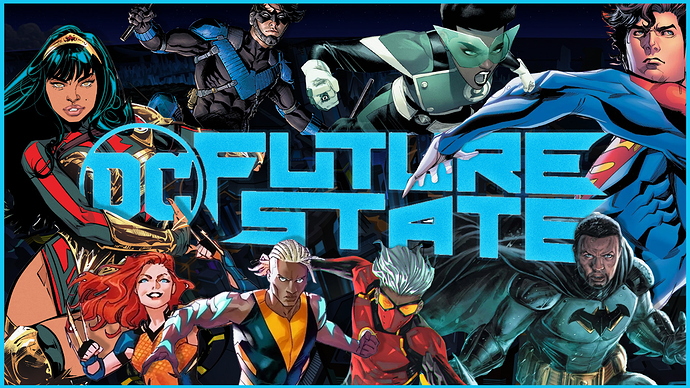 If you’re looking for more information on all of the titles that are releasing under Future State (as well as Infinite Frontier), I highly recommend you check out this thread by @Nathan.Payson! They’ve been doing a phenomenal job at keeping the forums up to date on all this info and are a great resource for this event! DC 2021 Comics Preview. What's coming and what to expect

The first issue I read was The Next Batman #1. As many of you know, I’ve been longing for a new person to take up the Batman mantel for years now. Once I saw the announcement for Future State and Tim Fox in costume, I was all but sold on it. In fact, this was the first comic I’ve ever put on reserve at a comic shop because I was so excited. So, now that I’ve read it, what are my thoughts?

Well, I mostly enjoyed it. I really like the world that’s been built up with The Magistrate and the current state of Gotham. The dialogue was pretty spot on and felt very realistic within the world (this is something I’m a big stickler on in comics and movies). I think that Luke and Tim (or is it Jace? I’m honestly not sure what they want us to use for him) was very interesting and will be something I look forward to seeing expanded upon in later issues. Lots of great set-up. On the technical side, the art is PHENOMENAL! I love the use of color in it so far, and the style overall is just spot on. Right up my ally. That said, the story isn’t perfect.

One thing I was looking for in this comic is what makes this the NEXT Batman? What is unique about this character’s time under the cowl? Which is something I really didn’t get much of a feel of. When it came to the actual Batman stuff in this comic, it really just felt like more of the same. That said, this is only issue one and there’s a lot to set-up. Maybe they just didn’t want to overwhelm the reader too much, and having Batman stay mostly the same will help with that. That said, I’m hoping it’s something that is explore more in later issues and perhaps the Justice League run. Overall though, I enjoyed it and will definitely pick up issue 2.

Beyond that, I’ll also add my thoughts on the back-issues. The Katana and Duke story was really interesting. I love the way it expanded upon the world that the main story set-up and I look forward to seeing them play a bigger role in the future. I REALLY liked the Arkham Knights. I think it’s such an interesting set-up for a new team and I like the dynamics of it a lot. It tackles one of my main issues with most portrayals of Gotham and how they treat a lot of the problems within. Seeing these “villians” get a chance to be seen in a more humane and compassionate light (while also acknowledging their issues) is really refreshing and something I’m excited to read more about.

I also picked up The Flash #1 and Superman of Metropolis #1 while I was out so I’ll be sure to post my thoughts on them once I’m done.

I’m definitely interested in Green Lantern as well! I’ll be sure to share my thoughts when the first issue comes out. I also hope to read Superman of Metropolis today and will definitely post my thoughts on it once I’m done. Thanks for the interest!

Green Lantern isn’t out this week, but Goeffrey Thorne says that someone in the press said “it’s not what your expecting, but it’s fun. It’s like Halo almost”

My understanding is that the story is about the lantern corps (being ringless).

Just finished Superman of Metropolis #1! I will admit I’m biased here in that I’ve always been a fan of Jon since he first appeared back in 2015. I think that they’ve done a pretty good job overall at ensuring that he’s earned the title of “Superman”. Well, after reading this first issue I not only feel that he earned the title, but that he also wields it well. Don’t get me wrong. Jon is no Clark Kent, but that’s kind of the whole point. I think this first issue shows us that Jon still upholds the same amount of compassion and morality that his father has even if he drops the ball sometimes. I think that the set-up of him trying to live up to his family crest is a very compelling and interesting dynamic.

The main criticism I have for this piece is that I’m not a huge fan of the villain. I just don’t find them very compelling and the external conflict they provide for Jon isn’t one that I’m all that interested in. That said, the internal conflict is definitely carrying me forward and I enjoyed the story overall. Not my favorite thing I’ve read in Future State so far, but definitely not bad by any means. I’ll probably pick up issue #2 still.

Alrighty, as far as the back-issues go, The Metropolis Menagerie was pretty good. I like Mister Miracle and I enjoyed the scrappy nature of the comic. I also enjoyed the way it built upon Superman of Metropolis and the overall world. I also really enjoyed The Guardian! I had never read any Guardian comics before, but I really enjoyed the perspective of the character and I think the villain is very compelling as well. I also appreciate how it continues to build upon this version of Metropolis as well. Definitely looking forward to the next issue.

Also, just a note on the back-issue concept in general, I like it. I honestly wasn’t sure how I’d feel about them, but I think it’s a really smart play by DC is a good thing for fans of obscure characters. Now characters, like The Guardian, who really can’t sell a comic themselves nowadays still have a life in print. It ensures that more people will read their stories and give them a chance since they’re paired with the big-name players. Not to mention that if they become more popular then they can branch off on their own from there. It’s a great way for smaller characters to still have physical copies without taking up shelf space.

Just finished reading The Flash #1 and I gotta say I’m pretty disappointed. I just think the writing in this issue is pretty weak and not very interesting. Most of it is very expository and doesn’t feel very realistic in the world. I get that there is a challenge in trying to catch up the reader on a lot of information, but even then it just didn’t work. A lot the issue is just Barry telling us how he feels and it doesn’t work for me. I just like a little more nuance. Plus the whole scientific aspect that the entire plot is building on feels ham-fisted and underdeveloped. Not to mention the fact that the story really doesn’t take advantage of the setting at all. One of the key elements of Future State is our heroes being in the future and seeing how they’ve changed and developed, but that’s really not a factor in this story at all. I genuinely feel like this story could have just as easily been told in the present. Not really interested in reading issue #2. Thankfully I still have Kid Quick to look forward to as a speedster in Justice League.

I got Wonder Woman #1 today. I enjoyed it. The art is very, very pretty. I haven’t really read much Wonder Woman in recent years so I’m not sure how a more devoted reader would like it, but I thought it was worth reading.

I won’t be able to read it til 6 month later, so I hope the stories are good. Have fun.

So far I’m enjoying my time with them! Still a little too early to tell, but I’m definitely optimistic.

I think I’m going to stick with Batman, Flash and Robin as they come out. Then I’ll read the rest when it get here. I’ll probably get whatever trade it all gets collected into to support it. But I am excited for it.
Batman was good. I agree with @OmniLad about Flash. I didn’t have high expectations going in, and it still missed them,

Hopefully Tim has a good time in the Robin issues. (I can dream.)

QUESTION: Can we read any of the Future State series here on DCUniverse or when DC infinity goes into effect?

From what I understand, DC Universe Infinite will be getting Future State. That said, new comics won’t arrive on the platform until 6 months after their original print release. Meaning you’ll see them joining the platform around June and July.

I’m looking forward to Robin as well! Although I’m not sure how I feel about the art style based on the cover. I’ll wait to judge until I actually read it.

I managed to snag Wonder Woman, The Flash, The Next Batman, Swamp Thing, and Harley Quinn today! Now I just gotta set some time aside to read them…

I’ll definitely pop back into this thread when I do, I can’t wait to see what everyone has said about what they’ve read!

Wonder Woman is the biggest standout of the bunch for me. Joelle Jones is such a rock star, and Jordie Bellaire’s coloring is top notch as usual. The book just oozed with great action and personality. Definitely looking forward to more Yara Flor (and Jerry the Pegasus) because I’m already a fan.

Wonder Woman was the one comic from the launch that I wanted but couldn’t pick up. I’m definitely gonna try and nab it the next time im out!!!

I couldn’t agree more! Yara has such a lively personality and I already just adore her, I can’t wait for the next issue! It was all just sprinkles on an already delicious cake when I found out that not only is it illustrated by Joelle Jones, but it’s written by her too!

(Ditto with the Jery sentiments btw! As well as Caipora, she’s a little cutie.)

The Next Batman had such a strong start as well, and I really enjoyed the Outsiders and Arkham Knights a lot more than I thought I would! Katana’s design really is chefs kiss, and that double page spread of her fighting the Magistrate in their warehouse? That was so cool!

I also loved Harley Quinn’s cyberpunk feel as well as Swamp Thing’s introduction of those new characters (especially Heather, I already love her.) I still have to read the other stories, but so far I am really really enjoying Future State!