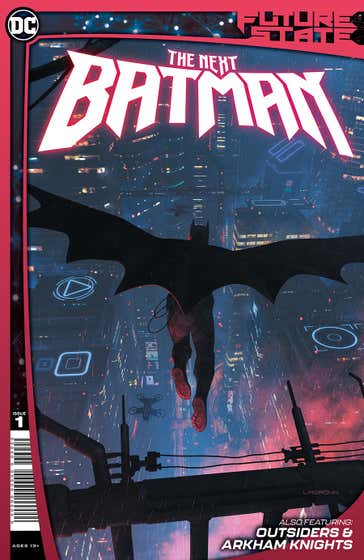 Along with Yara as Wonder Woman, the new Black Batman received the most coverage leading into Future State. But, it always should come down to the question of ‘how good is the story?’ The good news here is that John Ridley’s Batman is an A+ hit with me. The story immediately feels like a ‘real’ Batman story to borrow a line from Tim Fox. I know Batman Beyond is a favorite for many, but that high tech future never really brought me in. This Magistrate ruled dystopian Gotham though sucks me in from the first pages. So, we have a more street level Bats, with the entire power of city run by a strong man against him. In this short tale, Batman saves people that may not seem like saving to many, but Batman sees it as his duty. Backing this up is an interesting family story providing depth to the character. Art and dialogue are prefect. The only complaint I have is I wish the PR folks would have held back on telling us the identity of this Batman because it would have been nice to be guessing, probably incorrectly while reading.
The backup stories don’t hit this exceptionally high note. I’m unsure of how I feel about the Outsiders. Signal was cool and fun, Black Lightening shocking. But Katana. I don’t think I like her mech samuri suit, and I know I don’t like what they’ve done with her sword. But, I do want to see the second half.
Arkham Knights? okay, I guess. Nice concept but not sold on it yet.

I liked it. I enjoy the feel of a non-Bruce Wayne Batman and the concerns he has in doing the right thing. I laughed at him just ripping masks off of people’s faces and then running away so they don’t get killed on site. It is kinda smart of him to do that.

I’m just happy Duke got a little time in the spotlight with a backup story. I loved their Outsiders run so it was nice to see the team almost back together (minus Cass). Arkham Knights is a fun twist too. It’s nice to see the villains teaming up to defend their city. I do enjoy those types of stories.

This is a very cool take on Batman, chased by the Magistrate but still saving lives. Duke really has been underused so this depiction of him smuggling people out of Gotham is nice.

It had my favorite story of the week and overall really impressed.

Great
#5 The Outsiders Part 1 (Next Batman #1). I really liked the characterization of Katana here. There’s a phenomenal splash action page that did so much to showcase the action happening in a way clear, concise and frankly super cool. I’m stunned they don’t do more of that. (You’ll know it when you see it). Otherwise, the story was decent. Mostly, it was really cool action scenes that kept it together.

#1 Arkham Knights Part 1(Next Batman #1). Really cool premise with really cool ideas. I was not expecting to enjoy it so much, but WOW, that was great. It’s very inspired by Tomasi’s run with the Arkham Knight but in the best way possible

Agree the main story is a lot of setup, but it’s one of those stories I just am so instantly into, that I become absorbed in the details.

The main story was decent – good set up, great action and art. I’m not fully invested in Tim/Jace yet, but I’m curious to see what his story is.

The Outsiders story was cool if only for the art – the two-page spread of Katana fighting through the manor was freaking brilliant.

Arkham Knights was a surprise sleeper hit for me. Really love the concept. I hope something like that continues in the main timeline.