She won’t be gone. Don’t leave (see what I did there) she’s one of the most liked. I’d be dumbfounded if it’s permanent.

Ummmmm…then there’s that. Totally blindsided there. But GOOD STUFF! Clayface’s reaction to grandma made me laugh out loud. And again just now. Getting to watch this show after a dreary week of work has become a much anticipated pleasure. What better way to start the weekend? Keep it coming.

Is it wrong that I read that in Courage’s voice?

Gordon and his tanks were hilarious. He just wanted to use the tank.

The JL were great especially with phantom zone.

QoF teaming with Joker was an interesting surprise. Enjoyed Joker’s tower. Wonder how the LoD will react to him.

The crew is great as usual. Psycho and his 30 buck line. Shark and the wolf. But Clayface as always was hilarious especially with grandma wolf.

Kiteman (hell yeah) was great. Found it fun the he was trying to design a new kite. Enjoying how they have made him a mainish character. But Ivy growing big was cool. Enjoyed the tree humor.

Her “death” I did not see coming. But like most have said she’ll most likely be back and regrown as something new or the same. It may be the plot of season two help to grow Ivy or restore her memories after she’s grown or something. Still a good death scene though.

Ivy was my favorite tho…ahhhh!

You know, a lot of people ask me who would win between a wolf and a shark …

I am so impressed with this show. I don’t even know where to start.

King shark and clay face always have me in stitches especially clayface.

A fair assumption on the justice leagues part to assume Ivy was responsible for the mutant trees. With the lasso of truth bit I was honestly expecting Ivy to confess to dating Kiteman right there. And no surprise that everyone knew about Ivy and Kiteman except for Harley. Of course Harley finding out was hilarious to me because she was basically voicing the opinions of all the Harlivy shippers, the absolute outrage and detest lol.

And speaking of Kiteman I can officially say I like this guy. KITE MAN, HELL YEAH. Even though I don’t think he and Ivy will last he is a good character, fun to watch, goofy and adorable. Cmon you got to admit, him wanting to be Mr. Poison Ivy was cute and sweet.

Wanda Sykes as Queen of Fables, a delight as always. My favorite bit from her was when Harley reveals she was wearing “grandma’s” skin and Queen says “■■■■, props” total respect

Ivy becoming the 150 foot woman and apologetically killing those trees and the “kid.” so great

“ I thought you didn’t love anything more than trees”- Harley
“Well I guess there are a handful of exceptions.” - Ivy
I see what you did there.

Joker killing Ivy. DUDE. I’m confident Ivy is coming back but that still doesnt take away the shock of when it happened. It was like we were on this fun and exciting ride and so much great stuff was happening and then all of a sudden out of no where we take a hard sharp turn into grim and WTF. Didn’t see it coming. I even gasped a little. Out of all the things Joker has done to Harley this was by far the worst and in that moment my first immediate thought was “oh hell no, Joker has to go.”

I think that was the official breaking point for Harley and her relationship with Joker. Joker is now officially her nemesis, and as far as her taking his sh** anymore she is done. She’s going to be coming for him.

Also I hope they reveal who was behind wanting to harvest Ivy in the first place and why. We know it wasn’t just scarecrow so I really hope they explain all of that in the final episode.

The scream of “whyyyyyy!!!” From harley was, once again, such a relatable moment. So many times I’ve said that in response to who a friend was dating.

For any female fans of comics, seeing female leads who are relatable in so many ways makes this one of my favorite shows. Thank you DC for showing strong, powerful, multifaceted, aka normal women because even though I love shows like Justice League & Unlimited, we didn’t get real female friendships or female characters who rarely more than a stereotypical archetype of “warrior who’s too tough to show emotion.” I love how Ivy and Harley feel like real people, though I still think Ivy isn’t dead.

@mjosephb.4774 by the way love your profile picture. Gargoyles was the best written show ever (less the final season imho).
I think the show is doing something right if you care more for Ivy than the Justice League.

The scream of “whyyyyyy!!!” From harley was, once again, such a relatable moment. So many times I’ve said that in response to who a friend was dating.

That and “Whaaaaat?!” I cracked up lol

This being comic books I don’t see the death being permanent but it still doesn’t take away from the shock. I was genuinely sad to see her friends’ reaction to her death. Maybe I’m wrong and they keep her dead but I was liking how she was warming up to other people instead of plants. This show has been great and developing characters that may not get the spotlight otherwise.
I love movies and shows about the underdogs taking on the cool kids! This family reminds me of the Legends of Tomorrow which is another favorite show! 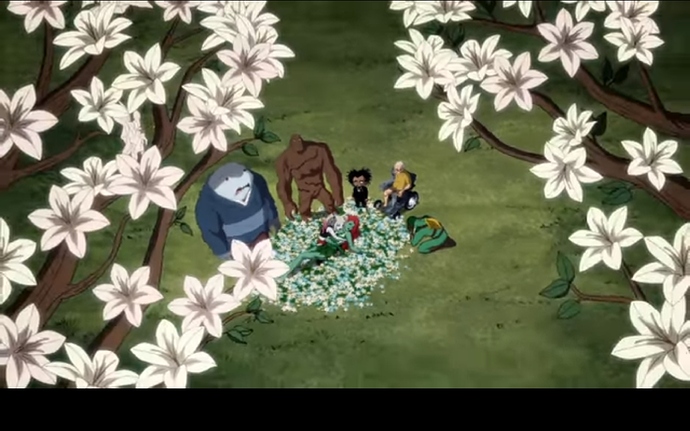 The modest Rose puts forth a thorn,
The humble sheet a threat’ning horn:
While the Lily white shall in love delight,
Nor a thorn nor a thread stain her beauty bright.

Next episode I don’t need a lesson on revenge, I just want to see the Joker get his head bashed in

I honestly hope in the next episode they don’t bring back Ivy right away. I want them to let it marinate for a little bit, while Harley goes to bash Joker’s face in.

Joker is getting all the hands next episode: the Harley hands, shark hands, psychic hands, clay hands, kite hands, and robot hands.

Joker is going to be begging Batman to take him to Arkham, than face Quinn’s rage.

If you have truly followed this show, you know one thing you can count on and that is you will be surprised and pleased.

Definitely an action-packed episode here. I LOVE Wonder Woman. Ivy’s confessions were gold. You know she was just itching to go to Jazz Fest. Those who say they hate Jazz Fest always secretly love it.

And I’m with Harley on the Queen of Fables. Who knew her head would literally pop right off?

Now, I didn’t think I would love Ivy and Psycho’s banter as much as I do. I knew he would love giant Ivy. That balding gremlin does indeed have a type.

And I’m sure she’s not perma-dead. Considering they have 13 other episodes ready … yeah, I’m just eager to see how they’re going to spin this.

It’s a pretty powerful moment for Harley to go through no matter what considering they kind of just made up. They developed a friendship stemming from her relationship with Joker. They fought and broke off their friendship because of Joker, and now Ivy’s gone for the time being … because of Joker. This fight is going to be great.

Oh, and Kiteman … I’ve gone from being eh with him, to being annoyed with him, to hating him. I’m not trying anymore to see what some other people see, this funny, cool guy. I’m now tuning him out, which is tough seeing most of his screen time is with one of my favorite characters.

Ivy and Harley find their love and friendship only to have the Joker perhaps kill Ivy. Harley will finally be over him and become a stronger character…I hope … Harley’s crew blurred the lines between good and evil. A great morality play …
Great writers, animators and voices. Please do a season two !