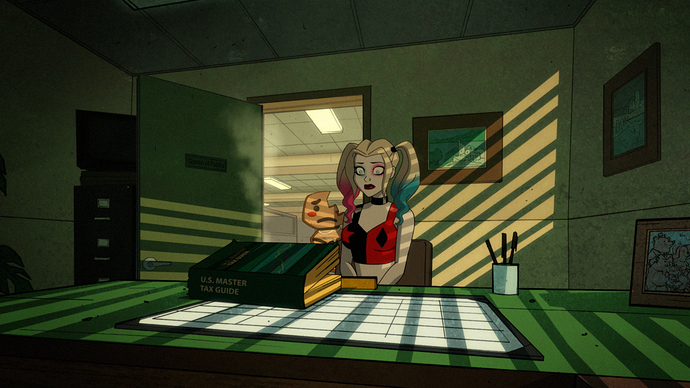 In episode 3, we see Harley moving forward with her plan to become a supervillain as she tries to rally her own crew.

After meeting with the Queen of Fables, she realizes the only way to get her own crew is to find the worst bad guys - enter Dr. Psycho and Clayface.

I love J. B. Smoove‘s character so much

This episode was so funnyOMG I LOVE THIS SHOW MORE AND MORE EVERY EPISODE.

Was anyone else mentally shouting “go Harley!” by the end of the episode?

Why can they say any foul language they want, but c**t is bleeped out?
See they won’t even allow me to type it??? It’s a word like all the rest!!!

Clayface was hilarious. Can’t believe Harley has a crew. Renaming the highway after her really did payoff.

I love this arch for Clayface. He doesn’t really wanna be a villain, just a great actor

Clayface is great. I loved getting to see the Justice League when the Queen of Fables was telling her story. I wish the episodes were longer! I’m glad Harley got her highway. Why all of the censorship this episode though? That felt strange.

Why all of the censorship this episode though? That felt strange.

Great question it would be interesting to know the answer.

Yeah go Harley! Shes got her own crew and showing that she doesnt need the Joker! Cant wait for the next episode!

“I have a thing”
Jumps into Hell Portal

That and the last scene

Ok, so I was not crazy about the first eps. but liked the 2nd and really liked this 3rd one. Frank is hands down my favorite character. I really hope he gets an origins eps. or one just focused around him. I am actually really hoping that my guy Kite Man & Ivy get together. I know they will probably be pairing her with Harley but I really hope not. I have never been a fan of them 2 together. I love this version of Clay Face. What a great take on the character. It’s really a great fit for him being a cliche over the top actor. I would have never of thought to portray him like that but it totally works.
Yeah the censorship was weird. I thought at first maybe because it’s a show that is emphasizing on Female empowerment that it was a funny take to censor the “C” word because of how much women hate that word and would consider it worse than the F word and others, but I think they also did it for a few other words. I might be wrong though.
I love the older versions of Harley and the version of her in Batman: The White Knight, but have not been a fan since Jim Lee’s costume change and the newer take on her. Is there a comic going into how she gained “gymnastic skills” as she puts it? @Dcgoddessofmayhem, I believe you said you’ve read all or just about all of her comics, do you know anything about how she acquired her fighting skills? I did have a hard time believing that she took down KGBeast though, also how afterward 2 joker goons could just overcome her and throw her from the train.

Honestly, ive enjoyed this show immensely and it was still good this week but Harley using the same highway joke as the first ep and not being called out for it was weak. Also Ivy liking Kite man is way off

I was thinking the same thing about the censoring on the C word. but did they not censor a few other curse words. I could be wrong though.

Could also be a mistake. I will check more closely on rewatch

Just finished it. It was so great. I laughed & rewound constantly. She got called a juggalo ( juggalette would’ve been more accurate) & I just happened to have read the Queen of Fables in JLA Rebirth less then 2wks ago. Love the character usage. It’s like a Brave & The Bold for Adults. They said they had the DC encyclopedias out when writing this show, excited to see who all gets in. Tawny Young was a rare one from this ep., reporter in some GL’s. Wanda Sykes was hilarious as disembodied Queen of Fables. I was worried this show might be bad. I’ve loved every second so far, & I can already tell it’s up my alley for sure.

The use of Queen of Fables here was INCREDIBLE. That bit about her being trapped in a book of tax codes is canon, by the way.

So it’s never been made completely clear and it’s different levels of ability in the different universes. Since this is animated I think we can go with the idea that her athleticism and elite gymnastics training paired with the serum from Ivy helped her develop her own brand of fighting mixed with a Joker level of crazy. Plus, getting beat by Joker she had to learn to defend her self you would imagine.