I vastly prefer pie to cheesecake, myself.

I just recently read the two HC collected editions by Kesel & Dodson. Maybe the writing wasn’t always the best but overall it was fun and sometimes that’s all I’m looking for. Plus the art is good and I really like Harley in that costume.

Which do you prefer?

@Mae Well now we have settle if cheesecake is a pie or not.

every twelve-year-old boys’ fantasy of what girls do at a slumber party. 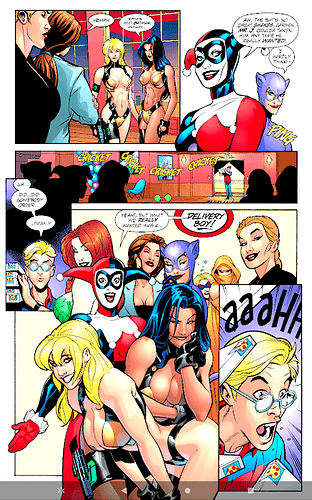 That page was the opening scene to an adult video.

I’m pretty confident that the majority of people reading this series were 12 year old boys.

I need to say that I’m enjoying the look at “Old Harley” VS “New Harley.” Where in Mad Love she got through school by sleeping with professors and in one of the books we read this round she says something about how she wasn’t any good in school and pretty much just got lucky with her job at Arkham to how in the newer Harleen story she worked real hard and was a more powerful woman having made a genuine mistake thinking that she could have an actual relationship with the Creepy Creepo Professor.

I have to admit that when starting my pulls with my current shop I told the owner that I like ultra violent stories full of super hot women…and do I really need to tell you all why I read Zombie Tramp? But I’m excited to see where these series go as far moving toward something that can be enjoyed by more than just 12 year old boys with unrealistic expectations of what happens at a Slumber Party.

I’m kind of excited to see where we moved from this: 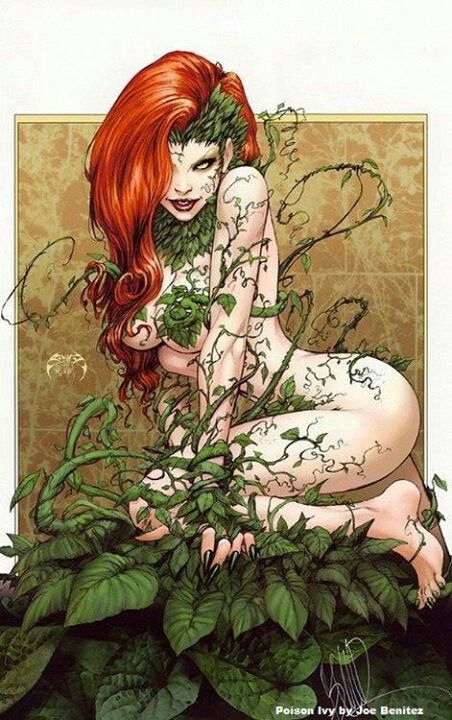 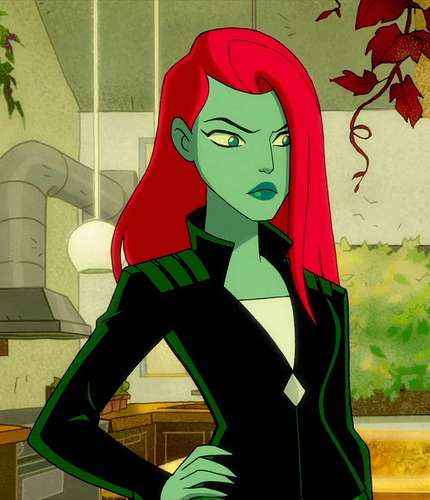 And I appreciate the opportunity to be able to evolve through the opinions of other people.

…and there’s really no discussion to be had over the fact that cheesecake is better than pretty much anything on earth.

I want all of them

That’s the important part—understanding that the audience is more diverse than that.

This run wasn’t too long after BTAS, so why they went so hard in this one direction seems strange. Harley never struck me as overtly sexual in that doe-eyed cheesecake way (still doesn’t) and lots of young girls like me were watching the show and starting to read comics, but this clearly wasn’t made w/ me in mind.

What I think is changing is that women are in the room now when creative decisions are made, so we are being considered as part of the audience. Women make up half the media consumers so its fair we have a voice, and I think it’s why Ivy

on the Harley Quinn TV Series is soooo much more like the Ivy who has lived in my head all these years!! lol

Obviously I can only speak for myself, but this voice I’ve given her, and her connection to the earth (same reason I

Swamp Thing & yes I’m a big ol tree hugger) is the real reason I’m a fan of hers—not how they draw her. That’s my take.

I agree so much, and seeing Ivy portrayed clothed like a normal human female yet still being very sexy on the Harley Quinn show is a huge win. There is certainly a time and a place for some titillating (pun intended) clothing options and poses, but my hope is that creators going forward understand that when done tastefully it has a much bigger impact.

M’kay, so I needz all of tha’ cakes, and I needz them NOW.

yet still being very sexy

when done tastefully it has a much bigger impact.

#NAILEDIT on both…and she’s still sexy even in clothing.

lol I have a weird fascination w/ them, so thank you for this DC!

I’m a confident guy, but I don’t think I would have said that to anybody at my previous comic stores when setting up pull lists with them.

Now, a few months after, when I’d be shooting the **** with an employee or two, yeah, maybe. Before though, I’d be worried about making about bad impression.

Was that Rocket Raccoon during the lockdown?

Those were my exact words…
I have absolutely no problem stating the fact that my comic books are a big part of why my kids never had a Step Mom.