Heros in Crisis Final Issue Why Did This Work? 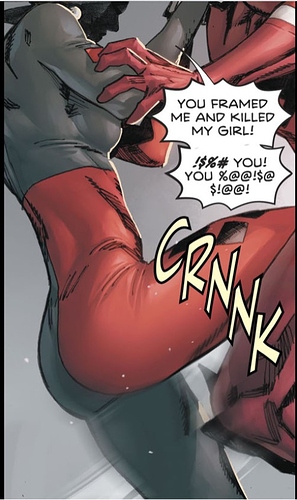 You would think every male superhero regardless of invulnerability or superspeed would have that area of there super-suit extremely well armored and likely was why superman used to ware his underwater on the outside. so how does Harley manage break Wallys Fruits?

Because the writer says so! Usually that is the answer to most questions

true,…may be wally removed the padding as it interfeard with his top speed.

Harley had INSANE plot armor that story. Sweet baby jesus. I had to throw out the book after seeing her beat the Trinity by herself lol

No she got away from the trinity thanks to batmans paranoia and knowing wonder woman.

That plot armor. Almost as bad as Morrison with Batgod IMO lol. And none of them pursued her afterwards if I recall correctly. Superman could quickly incapacitate her as she held Batman…he’s faster than a speeding bullet.

WW was knocked off her feet from a blow from Harley and she fights Gods and is damn near invulnerable lol. Bravo, Tom King. This was the guy that had Catwoman take out Flash(s) though so…there it is.

I can speak from experience that getting kicked in the groin (regardless of padding or a cup) still hurts more than I can put into words. I won’t pretend it’s the worst thing in the world, but it is NOT fun.

well my biggest Fanboydom is bats, i have been a fan of Harley since B:TAS and she generally had always and still has something looking out for her, just look how long she survived with the Joker. I would say booster surviving Harley was a bit more impressive of plot armor. I mean surviving Harley Quin badass Mother****** with his force field busted. that is true plot armor.