If you could pick one villain to work with who would it be? 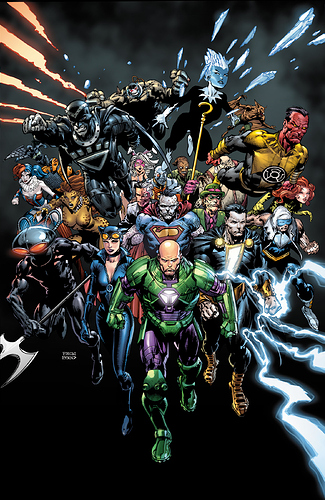 Plain and simple, which villain would you team up with or just like to hang out with? Mine is obvious, I’d love to pick Lex’s brain about complex things and world domination.

I’d pick a villain less prone to crazy and killing sprees, so that narrows the field considerably. I’d also look for someone used to having partners/teams that don’t all end up dead or betrayed/left to get caught.

As a non-metahuman and non-supergenius, I think Lex would consider me more of a disposable employee than partner. I think Selina would leave me on a rooftop somewhere.

Captain Cold has a nifty ice gun, but is usually just a regular human. He teams up frequently and repeatedly with the same people. While there are some villain shenanigans between them, they seem to be less bloody than the Rogues gallery in Gotham. I feel like I could contribute to and execute plans in this environment with minimal blood loss and maybe even get a cool trademark gizmo!

Yea I do love captain cold as well! I loved him and the rogues in the final crisis run.

Have you read it?

Vandal Savage? I dunno. in my mind he wants to protect “His world” Earth. so i wouldn’t risk too much death

Sinestro or slade, sinestro cause I want a freaking power ring and slade cause he can train me to be an assassin

Only bits and pieces. I like when the Rogues work together, so I’ll have to check it out. Thanks!

Slade sounds amazing. I’d love to train under him. Sinestro seems to power hungry, he’d prob try to kill me lol unless i pledge my honor to his corp.