Is Barbara Gordon Better as Batgirl or Oracle?

Barbara has fans in both incarnations, but also detractors. I tend to prefer her as Oracle for multiple reasons, but I want to see what everyone else thinks.

I preferred her as Oracle as well. She provided something profound to the DC Universe. That idea that anyone could be a hero and help others. That we all have skills that we can contribute to society, if we take the time to discover them and never give up on ourselves. I miss Oracle in the comics greatly, but I still love me some Barbara Gordon regardless of where she fits into the comic book landscape.

That said she is probably more useful as Oracle. 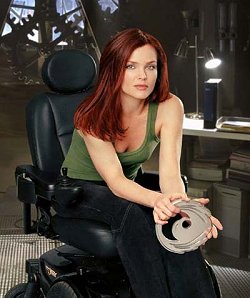 I love Batgirl. But she was even more of a hero as Oracle. She was basically the lifeline for a lot of superheroes when she became Oracle. That being said, she can still kick butt even if she was in a wheelchair.

Diehard Oracle supporter, myself. There have been so many great Batgirls, but there’s only ever been one Oracle. Not only is Babs more important and useful to the DC Universe in that role, but she also provided a powerful message that disability doesn’t mean you can’t be a hero.

For over 7 years now, I’ve missed Oracle every day.

I’ve always preferred Oracle. In my opinion, she was more unique and cool.

I like Babs being both Batgirl and Oracle. They don’t have to - and shouldn’t, in my mind - be exclusive in current continuity. I think Rebirth made a great course correction in restoring Oracle to Babs’s character, although I do think she’s way under utilized in that role. I definitely miss Oracle banter in the Bat-family’s and Birds’ ears. I want more of Oracle, and I think she can easily guest star in that role. I loved her recent(ish) team ups with Nightwing and Green Arrow as Oracle in the Watchtower, working her magic.

Back before the launch of the new 52, I was excited Babs was going to be Batgirl again (she’s my favorite), but I do think something was lost in how the transition occurred (similar to a number of new 52 transitions). Prior to Flashpoint, Babs regained the ability to wiggle her toes, which was an exciting moment. Showing Babs recover via surgery could have been just as moving and exciting, but we didn’t get to experience that with the character. The way events unfolded, I felt like I missed potentially great stories as well as Oracle related skills (somewhat corrected later).

From a skill standpoint, I think Oracle and similarly skilled characters can be problematic. Many more heroes have computer skills nowadays, and one of the more prominent new 52/Rebirth-era Justice Leaguers can link to pretty much anything (Cyborg). Additionally, these types of skills can (and have in my opinion) too often be used as a story crutch. Instead of investigating something and getting a mystery or detective story, heroes can just click/call a computer hero and get information. I’m fine with characters using the tools available - and Babs should definitely use her skills! - but some stories really handle those skills poorly and in uninteresting ways.

From a physical standpoint, I didn’t need pre-Flashpoint Babs to walk again, nor was I against her walking again (if the story made sense and was good/compelling). I think a lot of stories/writers handled Babs being in the wheelchair well, but there were a few that really annoyed me with repetitive and in my opinion emotionally regressive stories that were, quite frankly, off-putting - which is a sad thing to experience with a favorite character! Also, Babs’ multitude of connections and the technology available in the DCU made her remaining in the wheelchair a bit of a stretch without a lot of stories to support it. For example, Babs chose not to take a swim in a Lazerus pit, but what were her thoughts on cybernetic implants/other available technology/magic? What would she risk to walk again? What would she risk to never walk again? Interestingly (at least to me), we’re getting those stories now. For the future, I don’t need Babs to be in the wheelchair again, nor am I against her being in the wheelchair again (if the story makes sense and is good/compelling).

Bans was great as Oracle, however between Mr Terrific, Cyborg & Felicity Smoake their is plenty of tech talent in the DCU to pickup Oracles slack. Just as we have seen versions of the JLA and other associations split, perhaps not putting all ones cyberspace eggs in one basket is good and via multiple data sources there is always going to be different POV as to what information is the most useful for a character group.

Babs is the original Batgirl for a reason. Others have dawned the cowl of Batman, but it will always fit Bruce best. The same is true of Babs and Batgirl. As long as Jim G is a cop, Barbara should be Batgirl. The internal tensions this poses are intriguing.

Oracle, definitely. First, I like characters who do cool stuff with just their minds, without needing to run around in spandex and punch things. Second, I kind of like seeing characters who previously had a more sidekicky role (admittedly, Batgirl was more independent than a true sidekick like Dick was as Robin, but her identity was basically a variation on Bruce’s gimmick) grow into something more personalized. Third, I really like the original volume of Birds of Prey, Cassandra Cain’s run as Batgirl, the original run of Nightwing, the No Man’s Land story arc, and the Arkham games, and Oracle is a prominent character in all of those. Fourth, I liked her character arc of facing something as horrific as her injury at the hands of the Joker, but being able to move past it and come out stronger even despite the physical scars. Fifth, how many superheroes have disabilities but don’t have some kind of superpower that “compensates” for it (as opposed to just generally having useful skills like Oracle)? Sixth (more of a corollary to the fifth), her going back to being Batgirl has uncomfortable implications of her needing to be “fixed,” so I resent the fact that that happened more than I do her being Batgirl as a fact in itself. Seventh, she’s just too old to be a “girl,” and the name “Batwoman” is taken.

Basically, I’d be totally fine with an adaptation that just never addressed her paralysis or becoming Oracle, but making her revert annoys me so much that I’ve been avoiding any book she’s in since the reboot.

Man, this question’s been sitting with me the entire day. Babs is probably my favorite member of the bat family, and yet I’m still just at the tip of the iceberg with her character. I so love Oracle in Black Mirror, but I also really enjoyed the first half of her New 52 series as Batgirl. Both explore her complicated family relationships (which is whyI like Babs so much, I just love the Gordons), but the New 52 series adds in the extra dimension of directly interacting with her father as Batgirl which proposed interesting conflicts. Again, I have so much reading to do still, but from what I’ve read so far (and I have read more than these two, but these are just stand outs for me) I think Barbara Gordon Batgirl has the edge.

Oracle easily. No need for a essay type answer.

Batgirl, without a doubt in my mind.

Barbara as Oracle has had some good stories, but ultimately I think she was plagued with bad characterization and after a certain point became a bit of a crutch for writers and by extension the other characters. All the Gotham heroes who should be detectives of some regard basically just ended up giving Oracle the info and she spewed out where to go next.

Also, her role as Batgirl better rounds out the sort of “Trinity” of the Bat-Family. Much like how Wonder Woman balances the dark and light between Batman and Superman, Barbara does the same thing for Batman and Robin. She combines Batman’s intelligence and determination, with Robin’s optimism and humor. As Oracle, she was basically the worst aspects of Batman with all the grimness and manipulation.

I like both equally ATM. I love redheads and Barbara is a hero in either of her incarnations so it’s a win/win IMO.

No doubt, batgirl. When I think Barbara Gordon, I think Batgirl.

Batgirl can do everything Oracle can, Oracle cant do what Batgirl does.

I LOVE babs, I would like to see her in live action. She is actually my favorite bat family member. And the more I read about her the more I like her. She is just fun and a good contrast to Batman.