It’s an ancient tradition that whenever you do a family photo, there needs to be at least one silly one. 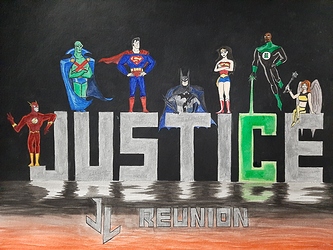 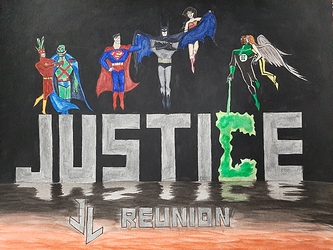 Nice work, I like the silly one best. I’m thrilled that you did both.

There I helped u give double likes lol.

Great job, & smart thinking too. I never think of them as doing human customs. That’s some out of the box brain work.

These are awesome, @RainStormRiddles! I love the color palette and reflection of the lettering. The second “silly photo” has so many fun hidden gems - my favorite being the smiley and bunny ears, Batman “Dracula pose with arms across the chest, and the wavy letter C. Thank you for sharing!

Steps In The Process

I know it’s always fun to see how a drawing or painting builds up, so I took pictures while doing these so you guys could see all the tricks and troubles! I’ll say right off the bat that I’m a better writer than artist. I’m no professional, I build my skill to communicate my ideas. (AKA, constructive criticism is always welcome.) Also, also, I’m better at animalistic figures than human. I definitely cut some corners on these because of time constraints, which I’ll mention once I get to the photos. 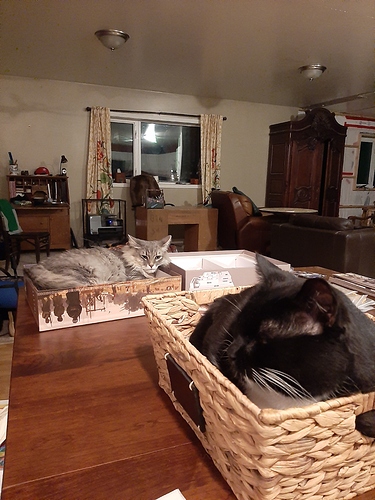 The most crucial part during any art project: make sure the ‘help’ is well occupied 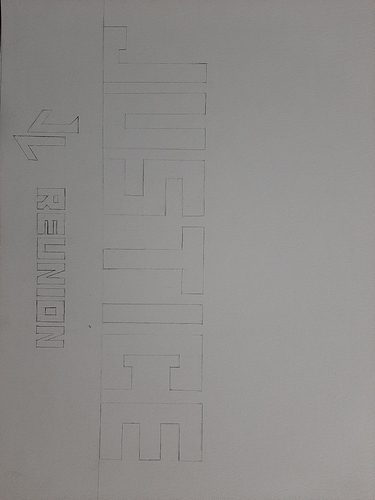 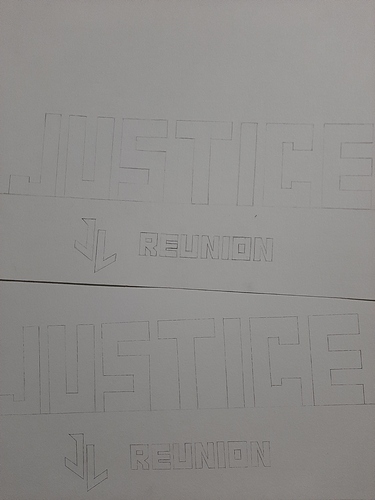 This first part was easy, but time consuming. There was a lot of measuring involved to make the letters look uniform. Duplication was easy thanks to my light board, which as been my best friend through the process. 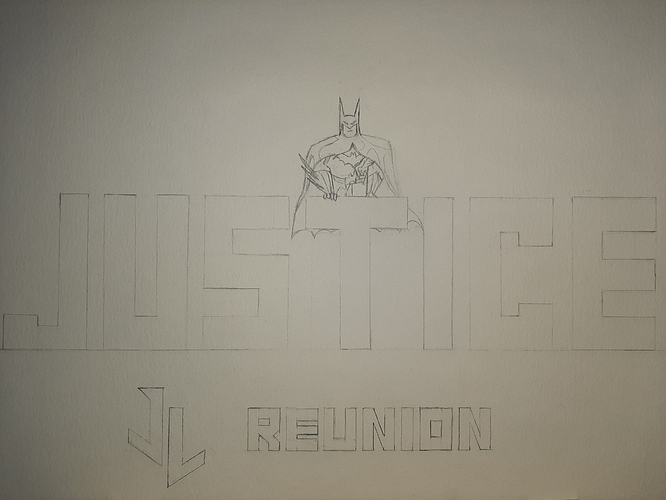 The first figure is always the most nerve wracking one, as this one sets up the scale for everything else. I started with batman because I already had a strong mental images of his pose, specifically how the cape would wrap around the ‘T’. I had to do some digging to find a good crouch reference image to decide on how he’d balance his weight. Overall, this one went very smoothly. There was a point where I realized there was no logical room for his left arm under the cape, which is where the battering idea sprang from.

From here on out, all the figures range around 3" high. In other words, I was working at a very small scale. All the faces are smaller than a dime, so a difference of .1 millimeter on any facial feature could change the expression dramatically. My detail oriented perfectionist side was clawing my hair out thinking I should have used bigger paper (despite this being my biggest that isn’t absurdly big) while my time sensitive side is on so grateful that I didn’t; this took long enough as it was. 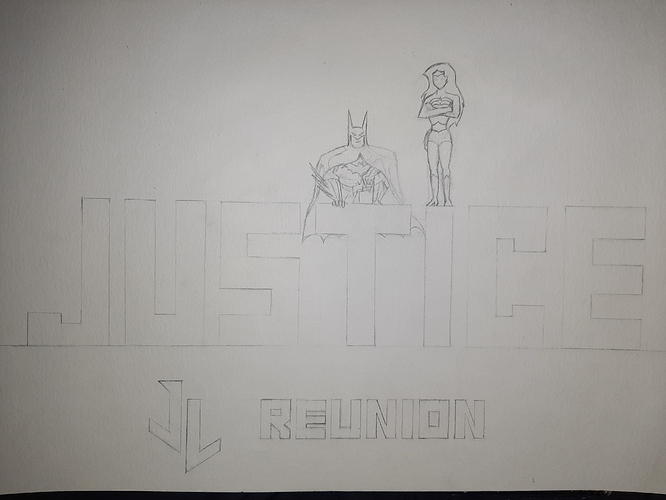 Long story short, Wonder Woman was a pain in the a**. And she’s still too short. My biggest mistake was trying to work from the head down when I have a fixed plain. (Normally not a problem, as there are several cheats in most settings, but I couldn’t change the letter size in this. Also, Batman’s pose was not good for judging her hight. At the end of the day (literally) I decided to just go with ‘satisfactory’ instead of a masterpiece. I held off on filling her face in because, as previously mentioned, the margin for error was tiny. Even a mechanical pencil doesn’t have a fine enough tip. I ended up intentionally breaking the graphite to get a chiseled edge. 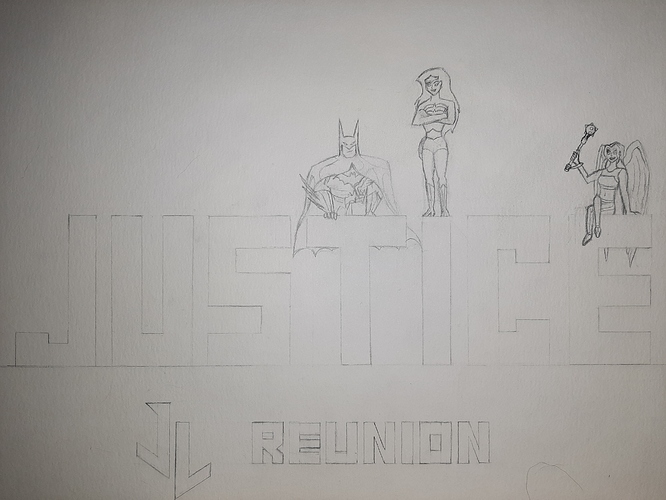 Shayera was merciful easy, despite having a more complex pose than ‘standing.’ I think I had her done well under 2 hours. The mace was slightly troublesome due to proportions and, again, the small scale, but not really. Like I said early on, I typically do creatures over humans, so her wings were the easiest thing to draw in both pictures. 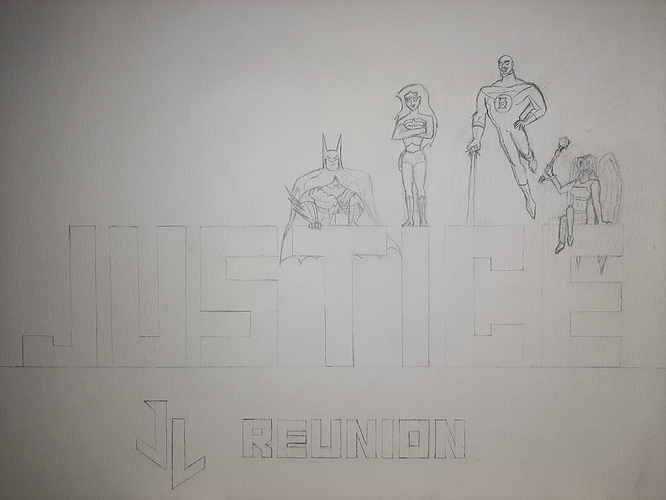 GL was fairly easy. His leg position was probably what I spent the most time reworking. Also his wrist angle for the lantern construct, but to a lesser degree. 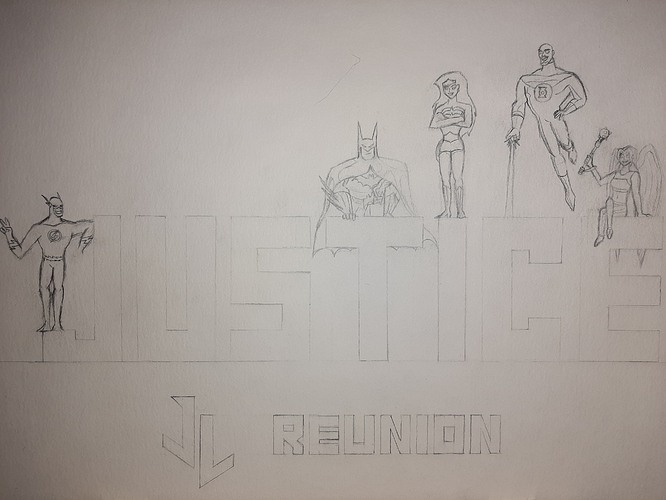 Flash was a bit of a challenge, but mostly because of the ‘L’ proportions. I ended up using a mirror to work out how best to balance him while still looking relaxed. It’s not perfect, but it works. 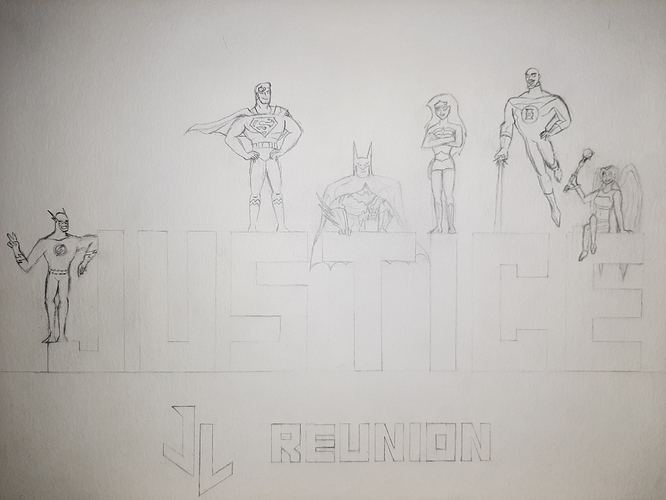 Superman was pretty easy. I just want him to have his classic pose. 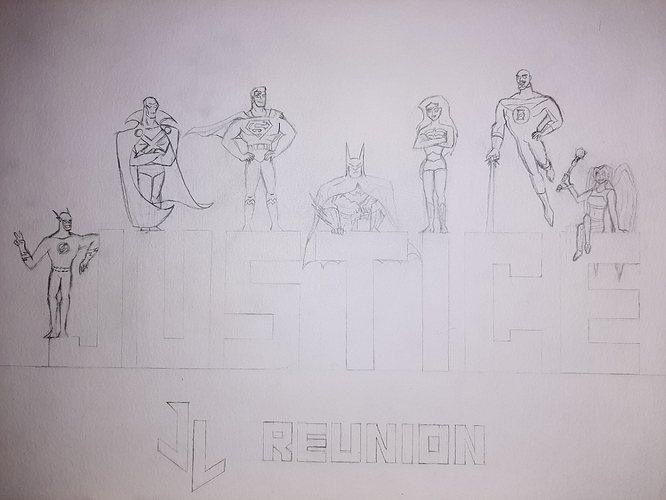 J’onn was fun, but I accidentally restricted his space because of Superman’s cape. That’s why I went with an under sweep to his Cape to balance out the picture. I’m not gonna lie, I also used it to cheat on his shins, which are way too short. At this point I was ready to be done though, so I didn’t stress it.

@RainStormRiddles Thanks for sharing your process. Very interesting to see you create the final product. 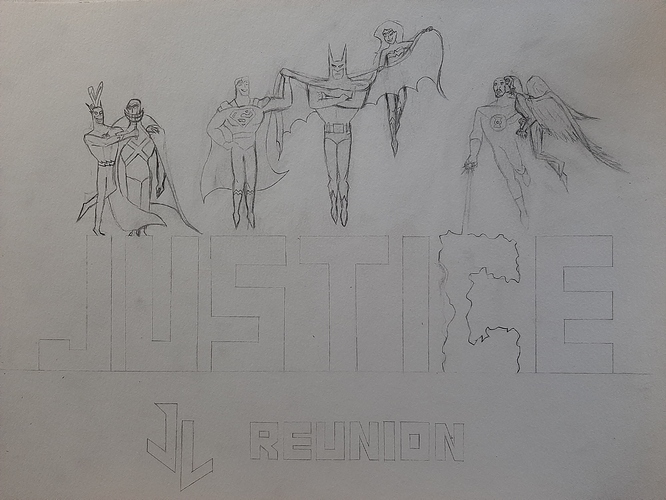 Unlike the first picture, this second one has a lot of interaction, so I was bouncing back and forth between characters a lot. WW was again the most challenging, but this time she turned out really nicely. The key was her expression. I used my light board a lot for proportions, along with some direct tracing where I could get away withit.

As for the poses themselves, coming up with them was just fun. It reflects more on my ‘writer’ side. There’s nothing I love to draw more than laughter. The fact that Batman can’t fly is as n old joke, and one that I don’t doubt Superman and Wonder Woman tease him about. J’onn was likely to treat a formal photo as just that, a formality. So where in the first picture most of the characters are pretty relaxed and just having fun (specifically inspired by the actors themselves and their want for a reunion) I left J’onn a tad more stoic. Hence Flash’s smile joke. Of course, J’onn’s got his own sense of humor, so he’d totally take the bunny ears (something flash himself did in the Static Shock episode) to the next level. Aslo, halfway through the drawing I realized that his arm actually goes through the cape, but because it’s the Martian Manhunter it actually works. John and Shayera is pretty self explanatory, and a whole lot of fun to draw! 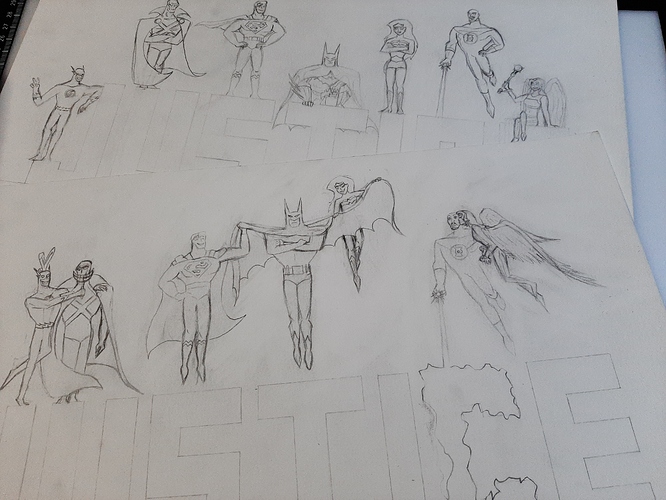 And thus, the drawing stage is complete!

Paint is definitely easier, but also EXTREMELY time consuming. Even the simple stuff. 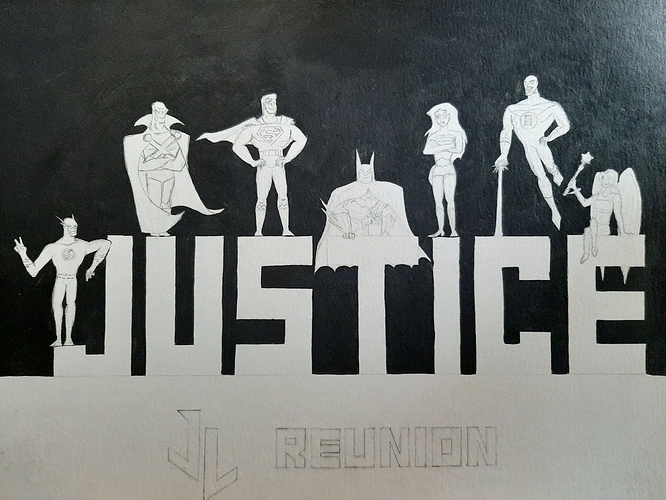 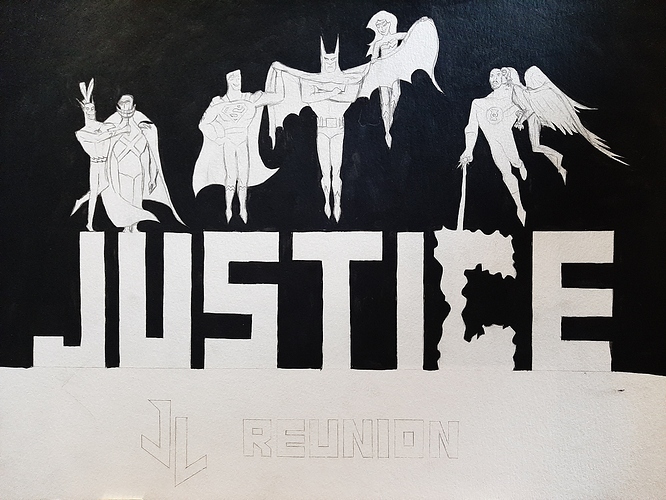 The black took about 3-4 hours total between the two. 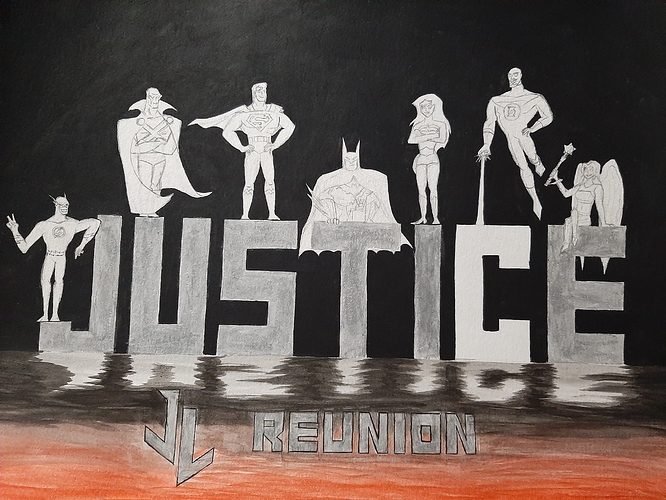 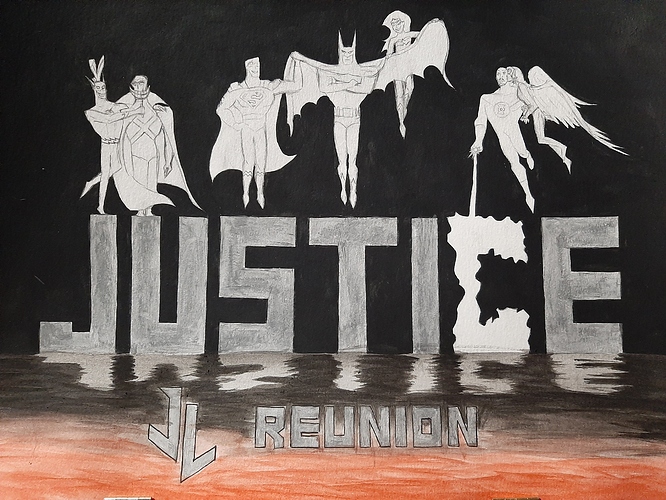 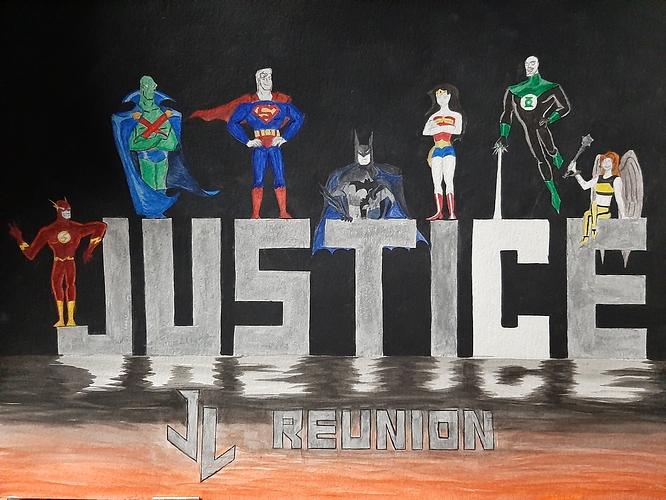 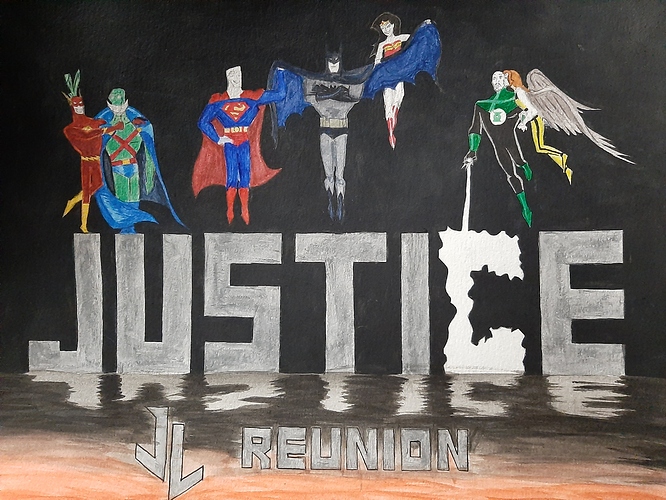 Round one on the paint. I did both sheets at once in order to make sure the colors match the counterparts. As ot is, watercolor is not the best for super dark, flat, and solid colors such as Flash’s red and under Batman’s cape, which is where the weird texture comes from. I personally am fine with it.

This stage took an entire day of working almost nonstop. Each character (both of the same) took over an hour each. I barely got it done in the 24 hours, but I didn’t want to spred it out over a couple weeks like I did with the drawing portion. (Its important to take breaks when getting frustrated or hung up on certain parts.) 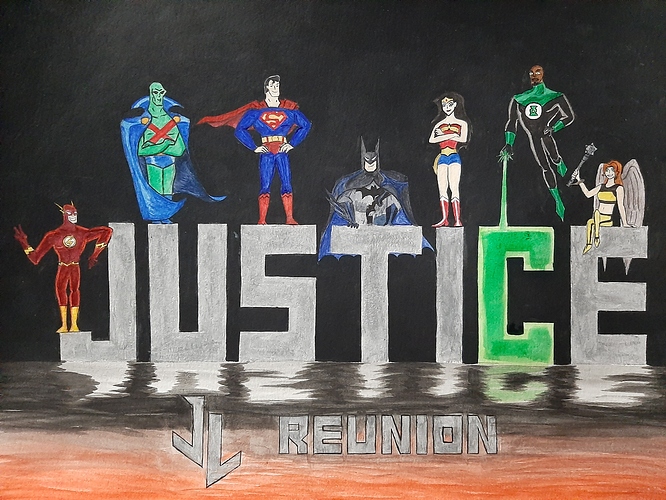 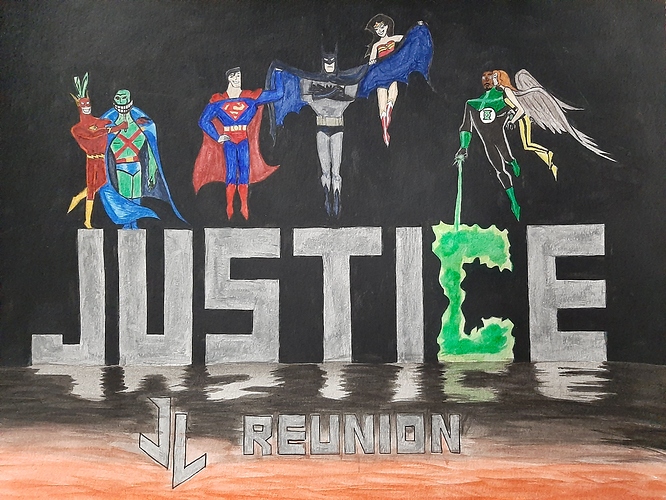 I saved all the skin tones and fine details for after all the rest, mostly because the series didn’t vary the skin tone: I used the same color across. (Minus John) Facial details are much easier when using a fine-tipped brush as opposed to a pencil. From the start of the process, I knew I wanted to paint the construct ‘C’ last. It was a very satisfying way to finish off the project.

Thank you to all who comment and appreciate these pictures! Let’s keep the #JLReunion reunion floating aroud!

Awesome artwork. Love the animated style and dichotomy in tone you have presented, really shows the family aspect that the justice league tends to have- well done. If I had to choose a part that stands out to me it would be wallys reaction in 2nd drawing, it fits and adds to his character. But everything seems great the colors pop and contrast well and I like that you showed us the process behind the drawing. Great job.

Great post and artwork. JLA is one of my favorite series and you did them justice. I like both of flash’s poses especially the joker-esque smile on The Martian and GL’s face is priceless. Thanks for sharing and the process that went into it @RainStormRiddles

I love it. The second one is pure gold.

These are great. I especially like Flash’s smile joke on The Martian. Nice touch. Made me laugh.