Just saw Joker and i love it from the beginning to the end. Joaquin Phoenix portrayed the Joker out of this world. Love how we get to see Arthur becoming The Joker. I want to know your opinions about the movie.

Honestly… one of the best movies I’ve ever seen. Best live action portrayal of the Joker yet. Kind of sad that it’s a stand alone film.

I said this on another thread, but what I found really amazing was how scary Joaquin Phoenix was when his Joker wasn’t laughing or smiling. The shot of him brooding backstage before his talkshow appearance was absolutely chilling. As for the movie as a whole, it was an amazing character study and hopefully pushes WB/DC to make more smaller budget films and/or movies that aren’t part of a larger cinematic universe. 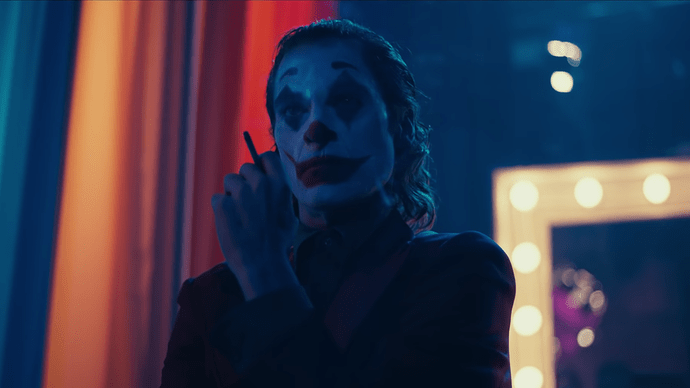 What would y’all think of making him Pattinson’s Joker if this movie is a big success?

I highly doubt Phoenix will partake in Reeve’s Batman film. They’re not even in the same universe.

It was remarkable, but I don’t understand the criticism it’s getting for being too violent.

The criticism isn’t for it being too violent. Not really. It’s getting criticized because people assume that it’s meant to make you feel sorry for “incels” (a word I’d never heard prior to this film), because some people mysteriously can’t separate understanding someone’s motivations from condoning their actions. Some hardcore DC fans are upset about the film, either because they don’t want the Joker to be anything other than an abstract, motiveless force of evil, because it’s not the Red Hood origin, or just because it doesn’t do anything for them personally. Which seems odd to me, given that it’s left up to the individual to decide how much was real and how much was a hallucination. Frankly, an argument can be made that everything before the final scene was a hallucination of the Joker in Arkham; just another one of the Joker’s multiple choice pasts.

It’s a damn good movie…liked Taxi Driver too…man, the movie really gets you thinking and it’s a movie based on a comic book character, amazing. I liked they it was played out. The movie is first full of pain, heartache, and heartbreak …and then towards the end where he enters the talk show curtain, Arthur fleck/joker instantly transforms into the joker that we know.

@J3D: And Arthur Fleck is not an incel. His actions are not motivated by any misogynistic entitlement to women.

A movie that was completely it’s own thing and gave its own version of the origin with good character development and for that this movie is damn great. It’s definitely up there with Superman the movie and the dark knight!

@AlexanderKnox: Tell that to the media and army intelligence, not me. I didn’t pull that out of nowhere. It’s what many people are projecting on to it, and the source of at least some of their condemnation.

That’s because they’re latching onto “incel” as a catch-all term that has little to do with the actual bitter little boys out there who are mad that society won’t bequeath them a supermodel. They might as well be accusing the movie of being “alt-right,” even though Fleck is not a right-wing extremist. “Domestic terrorist” is spot-on.

The whole thing was a fabricated story, the joker was trying to get empathy from the therapist in Arkham. He wanted empathy and then was trying to show himself as the hero to her. Just like he did to harley.

Personally, I feel this one should win Oscar nominations for Best Actor and Best Picture. It is by far the most interesting movie I’ve seen this year. So far, it is my choice to win Best Picture!

Joker is an amazing film! It’s a great origin movie (unless it was all a delusion, haha) too! Yes, it has moments that are unsettling n creepy but it’s a raw drama. So, I def agree that Phoenix killed it. I also enjoyed De Niro and Zazies performance. Well, I didn’t like this version of Thomas Wayne, he was just so smug. It was cool how the movie added the Wayne’s (after watching ‘Zorro, The Gay Blade’!) alley death. At times it felt like this world would fit in Frank Miller’s TDKR universe. From the dark n grimy Gotham to the political tones. Also, the scene where Joker appears on the Murray show reminded me of Miller’s Joker, when he goes to the Dave show. On the technical side of the film, it was just outstanding! The cinematography, the score, and obviously Todd’s vision was so dope! Def watch it in IMAX!

So many joker threads i don’t know where to post

“When you bring me out, can you call me joker?” It was an amazing performance and really brings awareness to people who are mentally ill and struggle from different disorders.

I loved it as well . Just the overall tone of the movie , the gritty street of 1980s New York cough GOTHAM i mean. and the Deep character study of a mad man and his descent . The a overall great DC movie and experience that we’ll be talking about long side DKR

I didn’t think it was a 10/10 that many are saying but it does get a solid 8.5 from me as I still enjoyed it. I have a few gripes but there was also lots to love in return so it balances out.

Also to be fair, my rating might go higher with more viewings. It certainly did for Into The Spider-Verse and Shazam!