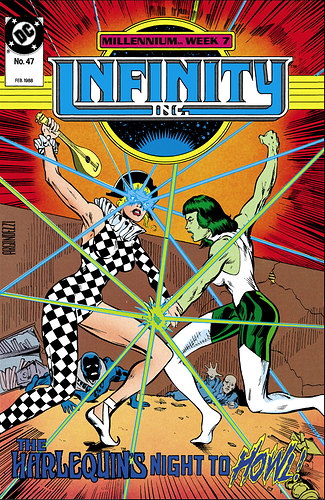 My sincerest apologies for my internet problems that delayed last month’s post. Much thanks to @JasonTodd428 for filling in. This week we will be reading the conclusion of Infinity Inc. It’s been said that all good things must come to an end. Many of the members of the team went on bigger and better things, but [spoilers] sadly one did not. Without further delay, let’s get started! 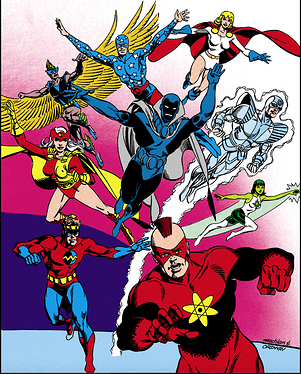 1: Do you think the Infinitors should have been a bit more suspicious about Marcie, or at least questioned her motives? Do you think they just assumed she was just a superhero groupie? (I’m sure they exist somewhere in that reality)

2: The team is now faced with a new Harlequin, and a team of villains, that unfortunately for them, now know entirely too much. How would you change your tactics, considering the circumstances?

3: We get a look into Albert’s past in issue #48, and we find out there was a time when he was small for his age, and bullied because of it. How do you think his “Uncle Al” and the rest of the JSA taking him under their wing changed things for him?

4: We’ve known for most of the series that Albert’s crush on Fury goes clear back to when they were just kids. With Hector no longer in the picture, Albert does his awkward best to pop the question, and of course, gets shot down. Do you feel bad for him, or do you think it’s for the best?

5: So Hector returns, just in another form. Do you think Fury took it well? Would you have been as quick to forgive him, even after that story, or would you have still been angry, or at least skeptical?

6: We get a look into Yolanda’s private life. What do you think of the differences between the Wildcat that we see here, and the one in the new Stargirl series?

7: And we see the sad end of Sylvester Pemberton. What do you think of how it happened in this series versus the opening sequence shown in Stargirl? Which do you think was a more fitting end?

8: We watch as the team tries to pull themselves together to get justice in the wake of Skyman’s murder. What did you like about the way they went about doing so, and what would you have done differently?

Feel free to ask questions of your own! My time at the keys has come to an end for now, but please feel free to make this discussion your own and add to the conversation.

Bookmarked to read either this Saturday or next, thanks for posting @Aurora

You’re very welcome @Aurora. Glad to be of help and welcome back!

I haven’t had a chance to read the rest just yet so I’ll be back later on to discuss the conclusion of this book.